The title of this article is ambiguous. Further meanings are listed under Bayonne (disambiguation) .

Bayonne ( Basque and Occitan Baiona for Good Harbor , lat. Lapurdum ) is a French town in the department of Pyrénées-Atlantiques in the region Nouvelle-Aquitaine .

Bayonne is located in the French part of the Basque Country at the confluence of the Adour and Nive rivers .

With 51,228 inhabitants (as of January 1, 2017), Bayonne is the second largest city in the Pyrénées-Atlantiques department after Pau . Today Bayonne has effectively grown together with Biarritz and Anglet .

Bayonne was called Lapurdum in Gallo-Roman times , whose name has been preserved in that of the Labourd region . It belonged to the land of the Tarbelli tribe and was a fortress, trading center and main port of the province of Novempopulana as early as the 3rd century and the seat of a bishop since the 6th century . After the Roman rule, it belonged successively to the Visigoths , Basques , Franks and Normans . The dukes of Gascony , who expelled the Normans towards the end of the 10th century, gave the city many privileges. The inhabitants gradually settled outside the city walls. After the unsuccessful attack of the King of Aragón, Alfonso I the Arguable , in 1130 , the then owner of the city, Duke William X of Aquitaine, gave Bayonne a new enclosure on both banks of the Nive. In documents, the Roman name Lapurdum has now been replaced by the Basque name Baya one , meaning only Bai.

The English received Bayonne in 1152 when the Duchess Eleanor of Aquitaine married Henry II . They lifted the freedoms and prosperity of the city, which received communal rights from King Johann Ohneland in 1215. The inhabitants sent a total of 30 galleys to the English in 1224 in support of La Rochelle against Louis VIII of France. Since 1291 Bayonne found itself in a trade war with Normandy and thus initiated the war between France and England ; It was occupied by the French from 1293 to 1295. The city later fell into a feud with the nobility and was defeated when the nobility called King Charles V of France for help in 1368 . Towards the end of the Hundred Years War , King Charles VII of France succeeded in conquering Bayonne: in 1451 Dunois and Count Gaston IV of Foix took the castle of Guiche and 15 other outbuildings from Bayonne. The suburb of St. Leon was stormed and set on fire. On August 19th, the governor Beaumont surrendered; Dunois and the Count of Foix, advancing through St. Leon and St. Esprit, united at the steps of the cathedral church. Bayonne now stayed with France.

The French king deprived the residents of the right to propose the mayor and decreased the number of municipal members more and more. The Mairie , now called Bayonne Governorate, lost its attractiveness. Henry IV later bequeathed this government, along with half the taxes, to his lover, Countess Corysandre of Grammont . Richelieu forced the then heir to renounce his right in favor of one of his secretaries, who sold it to the city for 26,000 francs.

Bayonne had already lost some of its importance when the mouth of the Adour silted up at the end of the 15th century and the river turned 11 km further north, so that only vehicles weighing 25 to 30 tons could get into the city. The fishing villages of Vieux-Boucau-les-Bains and Cape Breton benefited from this development . The inhabitants of the latter place even wanted to pierce the canal that was left of Bayonne, against which 4,000 Bayonnesians offered armed resistance; King Ludwig XII. ordered the residents of Cape Breton to pay landing taxes in Bayonne and to compensate the residents of Bayonne for the damage they had caused them. It was not until 1579 that Louis de Foix , the builder of the Escorial and the Cordouan lighthouse , began work on restoring the old river bed.

The now powerful Spain sought to conquer Bayonne in 1523, but Charles V's fleet failed in their attack on the city. It came in June and July 1565 at a meeting of Catherine de Medici , her daughter Elisabeth , Queen of Spain, and the Duke of Alba as deputy King Philip II. This Alba urged the French queen widow to a crackdown against the Huguenots , including But Katharina was not ready because of her interest in maintaining domestic peace. Nevertheless, because of this meeting, the Huguenots became suspicious of Katharina and in some cases even believed that the extermination of the Protestants in France and the Netherlands had been agreed upon. The bloody Bartholomew's Night that followed a few years later, in 1572, had no effect on Bayonne itself , as there were only a few Protestants in the city and there was no religious fanaticism.

That Bayonne had not yet lost its prosperity at the beginning of the 17th century is proven by the sea expedition, which set out in 1627 to stock up on the island of Île de Ré , which was blocked by the English , which it carried out with determination. The bayonet named after the city is said to have been invented in Bayonne in 1640 . The Spaniards continued to try in vain to conquer the city.

The renewed war with Spain in 1674 prompted Louis XIV to begin the construction of a new fortification of Bayonnes, which was a key to the passes of the Western Pyrenees . New bastions, barracks and the citadel were built according to Vauban's plan , the city was completely subjected to the military government and the citizens were forbidden to use the armed elevator on Corpus Christi , which in earlier times had given rise to mutinies, to set up a maypole and to shoot at targets. In 1684 there was another silting up of the Adour, the river turned two kilometers south of its mouth into the so-called Chambre d'amour , and for almost 40 years only very inadequate measures were taken against this malady.

In 1701 Philip V of Spain visited Bayonne and in 1706 Maria Anna , the widow of Charles II of Spain, who lived here from her pension of 40,000 ducats until 1738 without living in the Mareac Castle she had built. Mademoiselle Montpensier, bride of the Prince of Asturias, also came to Bayonne at this time. This did not remain without influence on the prosperity of the then 16,000 inhabitants of the city. But the circumstances mentioned above, especially the leasing system introduced in the financial sector since 1650, which brought about the drudgery of the officials and the surreptitious trade, increasingly undermined the prosperity of the city. In a performance from 1738, the Chamber of Commerce demanded the restoration of municipal freedoms and in 1762 the transfer of the customs line to the north bank of the Adour.

Bayonne's economic decline in this period was striking. Coastal trade, trade with Brittany and Portugal and the tobacco trade had come to a standstill, and trade in other goods also suffered from the unfavorable conditions. The Intendant Étigny wanted to set up a wool mill in 1757, but could not find a sale. The population had dropped to almost 9500 in 1762, workers and artisans emigrated to Spain, and shipping declined. The cities of Bilbao and San Sebastián , declared free ports , attracted trade. But from 1784 Bayonne experienced a rapid upswing when the mercantilist prohibition system was abolished, trade to America was released and Bayonne was declared a free port. Foreign trade, shipping, and imports and exports rose rapidly; in six years the population and prices increased by a third.

From the 19th century

At the time of the French Revolution , clergymen and aristocrats gathered there conspired with the Spaniards, which is why the majority of the population was forced to emigrate to the interior. For a trading town, the decree on the delivery of gold and silver in exchange for assignats had to be very sensitive; but so great was the power of the dreaded Paris committee that by the time the Convention revoked the decree, Bayonne had already given two million. The diocese was moved from Bayonne to Pau , from where it was returned by the Concordat in 1801.

In April and May 1808 Napoleon's meetings with Charles IV of Spain and his son Ferdinand VII took place in Marracq Castle near Bayonne . The relationship between the latter two was tense, and when Ferdinand VII was forced to renounce the Spanish crown in favor of his father on May 6, he was not aware that Charles IV had transferred his sovereign rights to Spain to the French emperor the day before . As a result, Napoleon called a Spanish legislative junta to Bayonne on June 15 to draft a constitution , which was announced on July 6, whereupon Napoleon's brother Joseph Bonaparte traveled from Bayonne to Madrid as the new Spanish king on July 9 . At the same time, on May 10, 1808, the Bayonn Convention was concluded between France and the Duchy of Warsaw , which resulted in the loss of 26 million thalers among others for the Berliner Bank and Maritime Trade. In 1814, after Soult's retreat, Bayonne was besieged in vain by the English and Spanish. The French under Thouvenot succeeded in a fortunate failure to capture General John Hope on April 14, 1814. Eventually Thouvenot had to hand over the city to the British.

During the Spanish turmoil after the death of Ferdinand VII until the end of the First Carlist War , which lasted from 1833–1839 / 40 , Bayonne was a political focal point and refuge for Spanish emigrants, to which many Carlisted after the end of this war. In 1854 the city was connected to Paris by a railway line .

Bayonne is the bishopric of the Catholic diocese of the same name .

A golden, brick crenellated tower with a black gate opening and an equally colored window under a golden lily rises above a blue corrugated shield base and is held by two golden, upright gold-armored and tongue-tied lions . Behind the two lions grows a green tree with nine golden acorns that point downwards . 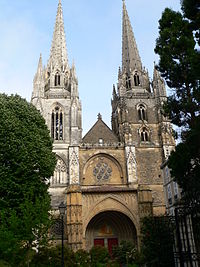 See also: List of the Monuments historiques in Bayonne .

The cathedral of Bayonne as well as the art collection of the Musée Bonnat-Helleu and the Basque Museum of History and Art Musée Basque are of national importance.

Bayonne is also known to younger people for the Fêtes de Bayonne festival . The five-day festival traditionally begins on the Wednesday preceding the first Sunday in August. With over a million visitors, it is one of the largest popular festivals in France and is the second largest Basque festival after the more famous Fiesta de San Fermin in Pamplona, ​​Spain . An important part of the Fêtes de Bayonne is a bull run . In contrast to the Fiesta de San Fermin , in Bayonne the young bulls are released on the Place Saint André and not driven through the streets.

The most important sports club is Aviron Bayonnais , which is best known for its rugby department.

The metallurgical and chemical industries are important branches of the economy. Bayonne used to be an important center of arms production: the thrust weapon (so-called bayonet ) that can be attached to a rifle stock is named after the city.

Bayonne's twin cities are Pamplona in Spain and Daytona Beach in Florida, United States of America.

Communes in the Arrondissement of Bayonne