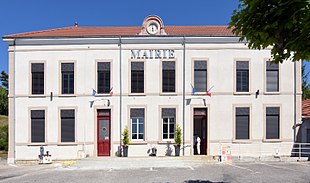 Mairie ( fem. , German mayor's office, mayor's office) stands in France and in other francophone areas on the one hand for the office (authority) of the mayor ( French maire ), on the other hand in municipalities without municipal rights and in the municipal arrondissements of larger cities for the building in which houses the mayor's office and the municipal administration and the municipal council meets. The official name of the mairies of the communal arrondissements is mairie d'arrondissement . In many places, the mairie is home to other municipal facilities such as the registry office , the land registry and the like. This building meets in cities with municipal law, the Hôtel de Ville ( City Hall ), in small towns of France and the French-speaking Switzerland, which protrudes no mayor, the maison communale called community center . In rural France, the combination of mairie and school is very common and is commonly referred to as Mairie-École .

The word (from Latin maior , French maire , German "mayor") has been used since the 13th century and was used in the 14th century in the modification mairerie .

The lowest French administrative unit on the left bank of the Rhine while it was part of the French national territory (1798-1814) and in the Grand Duchy of Berg on the right bank of the Rhine and the Kingdom of Westphalia (both 1806-1813) was designated as Mairie . The municipal structures in the Rhineland, especially in the left bank of the Rhine , were often still shaped by the administrative units created at that time until the municipal reform in the 1970s. The territorial and administrative structures of the electoral princes and duchies etc. were smashed and completely restructured by the French. The division into Mairie, Canton , Arrondissement and Département corresponded roughly to today's French administrative structure ( Collectivité territoriale ) . After Napoleon's defeat , the "recaptured" countries were divided into governorates in 1814 and administered temporarily, with the French official titles being converted into German titles. The “Mairie” became the mayor's office - but the French municipal constitution remained in force unchanged in many parts. B. in the Prussian parts (see Mayor's Office (Prussia) ). Even after the Congress of Vienna , the municipal constitution was largely retained. B. in Westphalia until the introduction of the new rural community order there on October 31, 1841.