Escorial is a redirect to this article. Further meanings are listed under Escorial (disambiguation) .

Inner courtyard with entrance to the church

Ceiling view of the church

The Real Sitio de San Lorenzo de El Escorial ("Royal Seat of St. Lawrence of El Escorial") is a palace and monastery complex that was built between 1563 and 1584 on the initiative of King Philip II of Spain according to plans by Juan Bautista de Toledo and under the long-term construction management of Juan de Herrera in the central Spanish town of San Lorenzo de El Escorial in the north-west of the Madrid region . The monastery castle is the largest Renaissance building in the world and has been a UNESCO World Heritage Site since 1984 .

The monastery palace of the Escorial is located on the south side of the Sierra de Guadarrama at an altitude of approx. 910  m . The distance to the Spanish capital Madrid is about 45 km (driving distance).

After Philip II of Spain had defeated the French King Henry II at the Battle of Saint-Quentin on August 10, 1557, the feast of St. Lawrence ( Spanish: San Lorenzo ) , he vowed to build a monastery in honor of the saint . His astrologers chose the small Castilian town of El Escorial ("the rubble dump").

Construction work began on April 23, 1563 and lasted until September 13, 1584. Granite blocks from the Sierra de Guadarrama were used for its construction. El Escorial was designed by Juan Bautista de Toledo , a student of Michelangelo . After his death in 1567, Juan de Herrera succeeded him and became the actual builder of the Escorial. Plagued by gout , Philip II ruled from here.

Philip's successors did not like to use the palace of El Escorial - for a fixed time of the year, however, the complex was assigned to them as a residence by the court protocol. Almost all Spanish kings from Charles I to Alfonso XIII are in the baroque crypt , which was expanded in 1654 by Juan Gómez de Mora . buried. Charles IV , who did not like the severity of the palace, built a Moorish-style summer residence nearby , the Casita del Príncipe , at the end of the 18th century . El Escorial has not been a royal residence since 1861.

Despite its length of 207 m and a width of 161 m, the building does not look like a typical palace . Because of Philip II's preference for an ascetic lifestyle, the facades are designed in the sober style of the Spanish Renaissance. The building complex includes a church (built over a quincunx floor plan in the Milanese scheme ), a church dedicated to St. Laurentius monastery of the Order of the Hieronymites (today in the care of the Augustinians ), the actual royal palace, a school and a library. The building is considered to be the main example of the Desornamentado style (Herrera style). On an area of ​​33,000 m², which is only surpassed by the Vatican Palace , there are 2,000 rooms with 3,000 doors and 2,673 windows, as well as 16 courtyards, 12 cloisters, 88 fountains and 86 stairways. The floor plan has the shape of a lattice, in honor of St. Lawrence , who, according to tradition , suffered martyrdom on a grate . 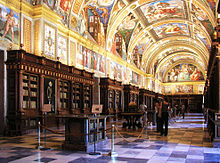 The library is housed in one of the largest halls in the palace with magnificent frescoed ceilings ; it houses over 40,000 books, including numerous medieval manuscripts including Latin, Greek and Arabic manuscripts. King Philip II had it laid out in 1567 and about 4,000 volumes of his private collection housed in it. As a result, there were further significant donations to the Escorial Library, which in 1587 already comprised around 18,000 volumes. However, in 1671 a major fire destroyed a considerable part of the bookstore.

Porcelain, furniture and tapestries can be viewed here. The most famous battles of the Spaniards against the Arabs and from the reign of Philip II ( Saint-Quentin ) are depicted in the 55 m long battle room.

The architecture museum houses a documentation of the 21-year construction work. The Summer Palace of Philip II has a valuable collection of paintings with works by Titian , El Greco , Albrecht Dürer and especially Hieronymus Bosch , Philip II's favorite painter.

In the center of the complex is the monastery church, which is dedicated to San Lorenzo de la Victoria . The facade of the monumental church rises in the royal court, opposite the main entrance. The statues of six biblical kings watch over the three portals . To the right and left of the entrance are the two 72 m high bell towers. The height of the dome of the church is 90 m. There are 40 altars inside the church; the high altar is made of red marble and jasper . On both sides of the high altar are the tombs of Philip II and Emperor Charles V and their families. The sacristy keeps over forty valuable paintings, including works by Titian and El Greco . 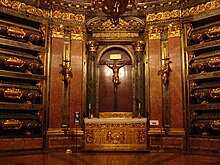 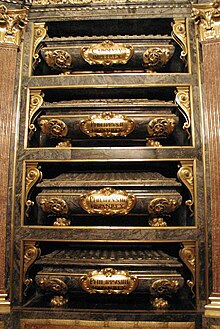 Pantheon of Kings: Group I. 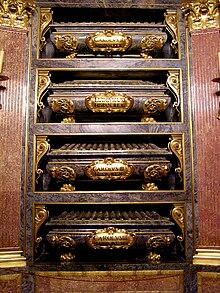 The Pantheon of the Kings is an eight-sided dome made of black marble, which is located directly below the monastery church. Juan de Herrera designed and built the shell on behalf of Philip II using only granite. The design for today's artistic design began in 1617 by Juan Gómez de Mora , and the furnishings were finally completed in 1654. The entrance is in the southwest wall of this octagon , while the opposite wall in the northeast is occupied by the altar of the crypt . The walls of the other six sides contain (as groups I-VI) four coffin niches arranged one above the other. Two more coffin niches are located (as group VII) in the southwest wall above the entrance. In each of these coffin niches there is a magnificent sarcophagus made of black marble with gold decorations, with gold tablets naming the names of the persons buried. Of the wives of kings, only those women are buried here who were the mother of a king. The following members of the Spanish royal family are buried in the Pantheon of Kings:

The magnificent sarcophagi of Group VII are empty, as the coffins of the Count of Barcelona and his wife are currently still in the pudridero of the Pantheon of Kings.

Pantheon of the Infants 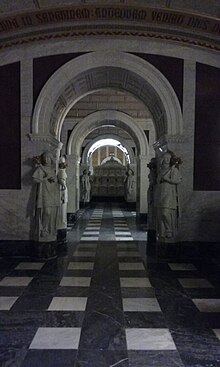 The room arrangement of the Pantheon of the Infants : View from Chapel IX towards Chapel VI with the children's collective grave 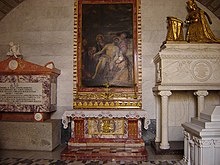 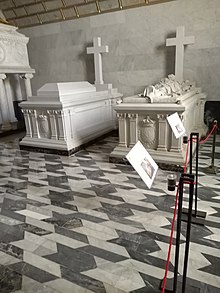 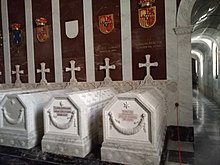 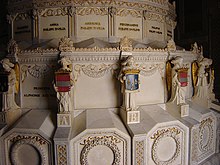 Pudridero of the Pantheon of the Infants: