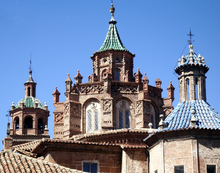 The Mudejars or Mudejar (from Arabic مدجّن mudajan , DMG mudaǧǧan  'made subservient') were Muslims whohad comeunder the rule of the Christian kingdoms in Spain during the Reconquista , wereable to continue to practicetheir religion , but also adapted to their Christian environment.

The Mudejares faced various forms of discrimination . As second-class subjects, they were not allowed to take part in the administration of the towns and communities in which they lived. Crimes against them were punished far less than those against Christians. It was also much easier to declare them slaves : if a Muslim man was accused of fornication with a Christian woman, both would be executed or enslaved; on the other hand, if a Muslim woman had slept with a Christian, she was the only one who fell into slavery. Mudejares women were therefore seduced or raped with the ulterior motive of enslaving them. The ban on having sexual relations with people of different faiths was also welcomed by the Mudejares. At Christian festivals, Mudejares had to kneel in front of the host that was carried through the streets. King Sancho IV of Castile described them as "dogs" in a manual that he wrote for his son Ferdinand .

With the conquest of Toledo and Segovia (1085), many Muslims came under the rule of Castile for the first time . With the capture of Cordoba (1236), Seville (1248) and Murcia (1265), the number of Mudejars in the kingdom increased considerably. During and after the reign of Alfonso X (r. 1252–1282), the Mudejars were divided into two large groups:

While the former were very well integrated into their Christian environment and counted numerous well-trained craftsmen in their ranks, the Mudejar communities of the Guadalquivir Valley were very unstable. The Muslim population was driven out of Seville, which was conquered by Castile in 1248 - the historian Richard Fletcher speaks of a downright " ethnic cleansing ". Some Muslims belonging to the political, economic and cultural upper classes also left their homeland voluntarily. Both the voluntary and the forced emigration of the Muslim population created problems for the Christian conquerors, as they did not have enough people to farm and administer the land. Therefore, the Muslims from Seville were soon invited to return. In 1264 there was the first major Mudejar uprising in Castile. Only the Mudejars of the newly conquered territories took part, the Mudejars in Old and New Castile did not.

From 1485 the Muslims of the Emirate of Granada and later the Kingdom of Granada were integrated into the Castilian state. The largest Muslim village in the lands of the Crown of Castile after Granada was Hornachos in Extremadura . In 1495 432 Muslim households were counted here.

Two Mudejar law books from Castile have survived in Aljamiado . One is called Leyes de moros and deals exclusively with secular law. The other, the Breviario sunnī , written in 1462 , deals specifically with religious issues such as ritual purity , ritual prayer and the pilgrimage to Mecca. Ice de Gebir, the author of this breviario , worked as a mufti and imam in Segovia and was a key figure in the last decades of Mudejar culture on the Iberian Peninsula.

In the other domains

Mudejars also lived in the Kingdom of Valencia , which was established in 1237 on the ruins of the Taifa state Balansiya. Here the number of Mudejares outnumbered that of Christians by a factor of five; Muslim life and culture flourished for centuries. In contrast, further north in Catalonia there were no Mudéjares at all. In Portugal, where they were not in the majority, the Mudejares found it increasingly difficult to maintain their cultural identity .

After the fall of Granada (1492), the last Muslim possession on the Iberian Peninsula, the situation of the Spanish Muslims deteriorated, mainly as a result of the now increasingly forced conversion to the Christian faith. Mudéjares who converted to Christianity were commonly referred to as Moriscos , "little Moors". The Maghreb scholar al-Wansharisi (d. 1508) quoted the influential Qadi Abu l-Walid ibn Rushd (d. 1126) as saying: "The duty to leave the lands of the unbelievers will remain until Judgment Day " and asked the Muslims who remained on the Iberian Peninsula to leave the country.

Many Mudejares were simple farm workers. Above all, however, there were more craftsmen among them, such as potters, carpenters, bricklayers and gardeners, than in the lower strata of the Christian population. Even today, the Spanish language has many loan words from Arabic in the word fields of woodworking and ceramics . As master builders, also for Christian clients, they exerted a considerable influence, especially on architecture.

In the Mudéjar style, materials ( brick , see also brick buildings of the Gótico-Mudéjar ) as well as forms and decorations from Islamic architecture such as horseshoe arches , stalactite vaults , Mauresques (surface decorations ), stucco ornaments ( Yesería ) and majolica decor with the style repertoire of the Romanesque , Gothic or Renaissance styles connected. Magnificent artesonado wooden ceilings can often be found in mudéjar buildings. A vault shape typical of the Mudéjar style are domes with ribs that lead past their apex area so that the dome can open up to a lantern.

Spread of the Mudejar architecture

The Mudejar style began in the late 12th century and reached its heyday between the 14th and 16th centuries. Of the preserved buildings from the early period, the apse of the Church of El Cristo de la Luz , the Church of Santiago del Arrabal and the former synagogue and today's Church of Santa María la Blanca (all in Toledo ) should be mentioned; a few decades later the style also penetrated to the north, i. H. to Old Castile ( Zamora , Toro , Sahagún ) and to Aragón ( Teruel , Tarazona , Alagón ).

Mudejar dome of the Church of San Miguel in Almazán , Prov. Soria

Also in Sardinia , where the architectural style came with the Catalans , there are examples of church buildings in the Mudejar style, e.g. B.

The Mudejar style also found its way into overseas territories in isolated cases during the Spanish colonial period . He also came to Tunisia with Moorish returnees in the 17th century, where the unique minaret of the Great Mosque of Testour was built in this style.

A special Iberian form of historicism is the Neomudéjar style, which emerged in the 19th century and was also used in the first third of the 20th century, in which many bullring (e.g. in Granada or Las Ventas in Madrid ) and public buildings were built: schools ( Escuelas Aguirre, Madrid), post offices ( Castellón , Málaga , Saragossa ), train stations, theaters (such as the Gran Teatro Falla in Cádiz ) and museums ( Pabellón Mudéjar , Seville ). The triumphal arch by Josep Vilaseca , modeled on the Mudejar style, welcomed visitors to the world exhibition in Barcelona in 1888 .