The title of this article is ambiguous. Further meanings are listed under Ávila (disambiguation) .

Walls of Ávila in the mirror of the Rio Adaja

Ávila is the 57,744 inhabitants (as of January 1, 2019) capital of the province of the same name in the Spanish region of Castile-León . In the 16th century, Ávila was the place of activity of St. Teresa . Together with Toledo and Segovia , the city is one of the three historical centers in the vicinity of the Spanish capital. Since 1985 it belongs to the world heritage of UNESCO .

Ávila is located in the Sierra de Ávila , part of the Iberian Divisional Mountains , almost exactly halfway (approx. 108 km drive distance) between the cities of Salamanca and Madrid on the Adaja River at an altitude of approx. 1100 to 1135  m . The climate is temperate; Rain falls throughout the year.

The rural exodus as a result of the mechanization of agriculture led to a significant population growth in the second half of the 20th and the beginning of the 21st century. In addition, several small villages in the area were incorporated into the 1970s. The city is growing much more slowly than the booming capital region , because the sparsely populated area offers little economic potential other than tourism .

The area around Ávila is still largely agricultural, with cattle breeding playing a major role. Viticulture is also important for the regional economy. Avila white wine has been mentioned many times in literature. Small traders, craftsmen and service providers of all kinds settled in the city. Avila is a car-assembly plant of Nissan Motor Ibérica with about 220,000 sq meters and about 480 employees (as of 2018).

The area around Ávila (Obila or Abula) was already settled by the Celtic tribes of the Arevacians and Vettons . The city has been continuously inhabited since the Roman era at the latest . Under the Visigoths it was one of the most important cities of the kingdom due to its proximity to the capital Toledo. From the 8th to the 11th centuries, Ávila was Moorish . The situation in the contested borderland between the Muslim and Christian world ( Castile = "land of castles") initially prevented an economic boom, which could only begin in the 15th century, when the fighting shifted further south and the Muslims finally in 1492 entirely of Spain expelled were. The city experienced its heyday in the 16th century. The plague , the expulsion of the moriscos , d. H. the baptized Moors, the emigration of many people to Central and South America and the emigration of the nobility to Madrid caused Ávila's gradual decline, from which the city has only slowly recovered since the 19th century.

In the Spanish Civil War and during the subsequent Franco dictatorship , Ávila was considered a particularly Franco-loyal city and carried the title "Ávila de los leales" ("Ávila, City of Faithful"). In the old town there are still several memorial plaques that were supposed to increase General Franco's fame .

Between 1915 and 1957 there was a small airfield in Ávila in the area northeast of the city center, where the Sonsoles Hospital is now located. When the civil war began, the square was expanded immediately and, from September 1936, it was also used by Franco's allies Italy and Germany . The headquarters and the operating companies, the aircraft group and air park (P / 88) of the Condor Legion were stationed here until they were moved to Vitoria in the following spring, plus the reconnaissance squadron 88 (A / 88) and the 4th squadron of Jagdgruppe 88 ( 4.J / 88). During this time, Ávila was often the target of Republican air strikes. During the Battle of Brunete in the summer of 1937, parts of Kampfgruppe 88 and the 2nd squadron of Jagdgruppe (2.J / 88), which had already been here for a few weeks at the beginning of the year, operated again from Ávila.

View from the city wall to the Cathedral of Avila 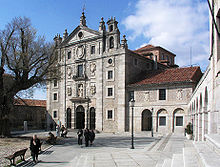 Ávila is connected to the two French cities of Rueil-Malmaison ( Île-de-France ) and Villeneuve-sur-Lot ( Aquitaine ) through town twinning .

Old town of Avila and churches outside the city walls

Municipalities in the province of Avila