This article deals with the Moors people. For further meanings, see Mauren (disambiguation) .

As Moors all those are in North Africa - partly as nomads living - Berber tribes understood that from the 7th to the 10th century by the Arabs Islamized were and these in their conquest of the Iberian Peninsula supported as a fighting force. But this does not mean a homogeneous ethnic group - the troops that were the first to penetrate mainland Europe consisted only of a minority of Arabs; The majority of the troops consisted of Berbers who were native to the area of ​​the present day Maghreb states Tunisia , Algeria and Morocco . In the later Middle Ages, especially since the time of the Crusades , the Moors were mainly called " Saracens ".

The etymology of the term has not been finally clarified. In addition to the derivation of the Greek mauros "dark", the origin from a North African Berber language comes into consideration. The Moors in turn gave their name to the ancient empire of Mauritania , the Roman provinces of Mauretania Caesariensis and Mauretania Tingitana, and the modern state of Mauritania . 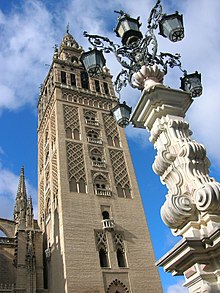 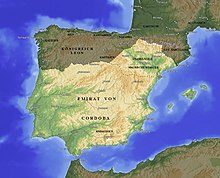 The Islamic al-Andalus (around 910)

Already the Romans had often had to deal with plundering tribes in North Africa who were called Mauri or Marusier , and while the Western Roman Empire disintegrated in late antiquity , at least seven small Moorish minor kingdoms ( regna ) were formed in the 5th century . The Vandals and the Exarchate of Carthage also had to deal with them. It was not until the later 7th century that the Muslim Arabs succeeded in better controlling the Moors, who were often still living semi-nomadic and who were now gradually adopting Islam.

In 711 Moors and Arabs invaded the Christian Visigoth Empire . Under their leader Tāriq ibn Ziyād they brought most of the Iberian Peninsula under Islamic rule in an eight-year campaign. The ruling Visigoths were weakened by internal conflicts and had little to counter the onslaught of the Moors. It is possible that the Sephardi, who were partially suppressed under the Visigoths, offered their support to the advancing Moors.

The Moors ruled over much of the Iberian Peninsula and North Africa for several centuries. In 750 the Moorish state was shaken by a civil war. The country subsequently broke up into numerous Islamic fiefs under the Caliphate of Cordoba . As part of the Reconquista, the Christian empires gradually expanded their power in the north and west over the entire Iberian Peninsula. The Christian kingdoms of Asturias , Galicia , León , Navarra , Aragón , Catalonia and Castile emerged , later from these Spain and Portugal .

The early period of Arab-Moorish rule is known for the mutual tolerance and acceptance that Christians , Jews and Muslims showed towards one another. In 1031, however, the Caliphate of Cordoba collapsed and the Taifa kingdoms were formed , which soon came under the rule of North African Moors. In one of these small empires, the Zirids of Granada , founded in 1019, the first pogrom against the Jews in Europe took place in 1066 . Over time, power concentrated in the hands of the Berber dynasties of the Almoravids (c. 1050–1147), Almohads (1147–1269) and Merinids (1269–1465).

On July 16, 1212, a union of Christian kings led by Alfonso VIII of Castile in the Batalla de Las Navas de Tolosa expelled the Muslims from central Spain. Still, the Moorish emirate of Granada thrived under the Nasrid ranks for another three centuries. This kingdom later became known for architectural and aesthetic masterpieces like the Alhambra . On January 2, 1492, Boabdil , the leader of the last Muslim stronghold, was defeated by the troops of united Christian Spain. The remaining Muslims and all Spanish Jews ( Sephardim ) had to leave Spain or convert to Christianity after the Alhambra Edict was passed . Descendants of the converted Muslims were called Moriscos . They formed z. B. in Aragón , Valencia or Andalusia an important part of the rural population until the Duke of Lerma finally expelled them in the years 1609–1615. Most emigrated to North Africa; some also settled in the Ottoman Empire . Still others traveled through Europe as traveling people (gypsies, musicians, acrobats, morris dancers, etc.).

“Moorish art” is generally understood to mean the art of the Islamic West ( Andalusia , Maghreb ). Strictly speaking, however, the early phase, i.e. H. the Mezquita de Córdoba still belongs to the tradition of the Islamic East ( Damascus ). In its early days, Islamic art was still largely under ancient Roman and Byzantine influence, but in the west (Maghreb) the Islamic world emerged with the occupation of power by various Berber tribes - some of which were mutually hostile - in the 11th and 12th centuries. In the 19th century, an art style called 'Moorish' emerged. The artisans took over elements from the Arabic art of the Near East and combined them with materials and decorative motifs from their own tradition.

Courtyard of the Lions in the Alhambra of Granada

This becomes particularly clear in architecture: columns , domes , inner courtyards, etc. come primarily from ancient architecture, which the Arabs got to know and adapted in the course of their conquests and raids. Most of the decorative elements (braided ribbons, diamonds, hexagons, stars, etc.) - often combined to form endless patterns, were also pre-established in late antique mosaic art, but were further developed into true masterpieces by the artisans of the Islamic world, especially the Maghreb (see also: Sebka ).

Typical materials of Moorish architecture are bricks for the load-bearing structure, tile mosaics , stucco and cedar wood as facing and green-glazed roof tiles (initially only for mosques, later also for mausoleums and palaces). Hewn natural stones were only used for columns and capitals .

In the ceramic - and jewelry art as well as in the carpet is often used motifs similar in architecture or Cloth Weaving -. Originally these had - beyond their purely decorative purpose - disaster-protecting ( apotropaic ) functions.