The title of this article is ambiguous. For the mountains of the same name in Brazil see Serra dos Pireneus .
f1

The Pyrenees ( Spanish Pirineos , French Pyrénées , Basque Pirinioak , Catalan Pirineus , Aragonese Perinés and Occitan Pirenèus ; from Latin Pyrenaei [montes] 'the Pyrenees between Spain and Gaul ' ) are around 430 km long mountain range . They separate the Iberian Peninsula in the south from the rest of Europe in the north and stretch from the Atlantic Ocean in the west ( Bay of Biscay ) to the Mediterranean in the east ( Golf de Roses ). They are part of the Alpidic mountain system .

The state border between France and Spain essentially follows the mountain ridge. In the middle of the Pyrenees is the small state of Andorra .

The origin of the name Pyrenees is unknown. According to Greek and Roman literature, including Silius Italicus , they are said to have been named after Pyrene , a figure from Greek mythology . 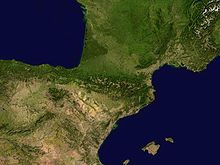 Satellite image of the Pyrenees

The Pyrenees are divided into the Western or Atlantic Pyrenees, the High or Central Pyrenees and the Eastern Pyrenees, to which the Pic du Canigou belongs. The area of ​​the High Pyrenees extends from Port de Canfranc in the west to the Val d'Aran in the east.

The demarcation to the Cantabrian Mountains is fluid, but can be drawn along the line Pamplona - Leitza - Oria River - Donostia-San Sebastián .

The highest mountain is the Pico de Aneto in the Maladeta massif , at 3404 meters . There are around two hundred peaks over 3000m in the Pyrenees. The highest of them are glaciated . A sharp decline in glaciers has been observed since around the middle of the 19th century . The formerly very impressive Ossoue Glacier on Vignemale has lost much of its former size.

Before the colonization by Cro-Magnon people ( Homo sapiens ), the Spanish foothills of the Pyrenees was already inhabited by Neanderthals , as is shown by finds in the Cova Gran de Santa Linya cave .

The Cromlechs of the Pyrenees are evidence of Stone Age settlement .

The political border between France and Spain runs through the Pyrenees . The small principality of Andorra is located in the eastern Pyrenees. Like the Alpine region, the Pyrenees also have a culturally connecting function between the three neighboring countries, which is shown, for example, by the use of the same languages ​​( Catalan , Gascon , Basque ).

There is extensive pasture farming with sheep , cattle and goats , and in the summer months also as alpine farming . In the past it was common, but now it has almost disappeared, the classic pasture farming ( transhumance ). Various types of cheese are produced, especially in the western Pyrenees . In the limestone, which is predominant there, there are often caves in which the cheese can mature on the mountain pastures . Cheeses are made from cow and sheep milk , often mixed. Well-known varieties are the Ossau-Iraty Brebis-Pyrénées from the Vallée d'Aspe , the Vallée d'Ossau and the neighboring Spanish Pyrenees and the Pyrenean cheese made from cow's milk in the Basque Country with its black wax layer. Fresh and stored goat cheese is also made from goat milk . 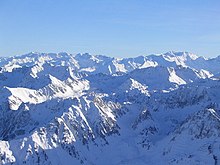 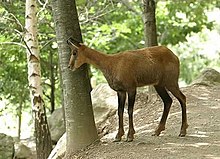 Reflections in a lake in the Pyrenees

In the foothills, viticulture is practiced on both the French ( Irouléguy , Jurançon , Corbières ) and Spanish sides . Until the mid- 20th century played smuggling an important role. The Pottok ponies served as pack animals in the western Pyrenees , while in the east the Mérens proved themselves as smuggler ponies .

Like any high mountain range, the Pyrenees represent a significant obstacle to land-based traffic. The most important road and rail connections are therefore in the far east and far west of the mountains - where it is still relatively low. In the west, the motorway between Bordeaux and Toulouse on the one hand, and the Spanish Basque Country and Madrid on the other hand, crosses the border crossing Irún (Behovia). The motorway in the east connects Marseille and Barcelona as well as the other places on the French and Spanish Mediterranean coasts and crosses the border in the small town of Le Perthus; on the Spanish side lies the municipality of La Jonquera on the border . Most of the goods traffic between the Iberian Peninsula and the rest of Europe runs through these two motorway border crossings.

The two most important railway connections run through the Pyrenees in the far east and in the far west, namely at Irún and Cerbère / Portbou , both close to the coast. Another cross-border rail connection is a line from Portet-Saint-Simon station south of Toulouse via Puigcerdà to Barcelona. It leads through the 5414 m long Ferroviaire du Puymorens tunnel . A fourth connection, the Ligne de Cerdagne, has only a narrow gauge and is of no importance for international traffic. Another previously existing connection ( Pau – Canfranc railway ) through the Somport tunnel was closed.

Important country roads connect the cities of Pau (France) and Jaca or Huesca (Spain) through the Somport tunnel and Foix (France) and Manresa (Spain) via the border crossing Bourg-Madame / Puigcerdá and through the Cadí tunnel. The other roads that cross the Pyrenees are mainly of regional importance. Worth mentioning is the camino frances , emanating from France Way of St. James , the pilgrimage route to Santiago de Compostela . Many pilgrims start it in the small town of Saint-Jean-Pied-de-Port , about 8 kilometers from the Spanish border. Andorra can only be reached by a single country road, using either the Envalira tunnel or the country road over the Envalira pass from France .

→ Main article : Geology of the Pyrenees

Like the Alps , the Pyrenees were formed around 50 to 100 million years ago in the Tertiary . The western Pyrenees consist mainly of limestone , while the central Pyrenees are dominated by various granites . The fold mountains were covered with a closed ice sheet, especially during the Würm Ice Age. During the Ice Age, numerous hanging valleys and many thousands of glacial lakes have formed. As a result of these boundary conditions, simultaneous snowmelt and heavy rainfall can lead to large-scale devastation, such as the floods in the Pyrenees in 2013 .

On the French side, some brown bears still live in the large mixed forests up to an altitude of around 1800 m . The Pyrenean chamois (French isard , Spanish sarrio or rebeco ) can be found in the high alpine areas , but it also occurs in the Cantabrian Mountains and Abruzzo . Despite protective measures, the local subspecies pyrenaica of the Iberian ibex finally became extinct in 2000 for unknown reasons. At the western end of the mountain range, the globally endangered European mink has its last natural occurrence in Western Europe. Although not originally native, the marmots, naturalized from the Alps, have spread very widely. The Pyrenean Desman , a species of the mole family , is rare and its population is threatened . Of birds such as the are stone , minke , and Bonelli's eagles and geese , dirt and bearded vulture to name. More particularly remarkable because mostly widely isolated breeding bird species are ptarmigan , capercaillie , white-backed woodpecker , Mornellregenpfeifer , Wallcreeper , Alpendohle , Siskins , Zitronenzeisig , Ring Ouzel and Pipit . There are a large number of insects , with around 300 species of butterflies , grasshoppers and beetles in particular . The endemic species of this mountain range include the Pyrenean newt and the Erebia gorgone .

The flora contains around 4500 plant species, 150 of which are endemic . They are rudiments of the last great ice ages: during the Pleistocene , many plant species ranged from the cold north to the warmer south, but they could not cross the Pyrenees. However, some of them fled into valleys and have become endemic to this area. Examples are the Pyrenees lily and the Pyrenees rock plate .

There are three national parks in the Pyrenees . The oldest is the Ordesa y Monte Perdido National Park, created in 1917 on the Spanish side , south of the Cirque de Gavarnie . This covers an area of ​​around 156 km². Also in Spain is the Aigüestortes i Estany de Sant Maurici National Park with an area of ​​around 141 km², making it the smallest of the three national parks. On the French side, the area from the mountains south of Lescun in the Vallée d'Aspe in the west to and including the Néouvielle massif in the east was declared a national park ( Parc National des Pyrénées ) in 1967 . This has an area of ​​457 km².

One of the most important Pyrenees researchers was the French geographer and mountaineer Franz Schrader (1844–1924), whose father had moved from Magdeburg to France at the beginning of the 19th century. He has mapped various important massifs of the Pyrenees, he is particularly known for exploring the Cirque de Gavarnie , at the foot of which he is also buried in the small town of Gavarnie , along with another well-known Pyrenees explorer , Henry Russell . Schrader was the first to climb the Grand Bachimale (3144 m), the three-thousand-meter peak was named in his honor, Pic Schrader . Schrader was President of the Club Alpin Français and Knight of the Legion of Honor .