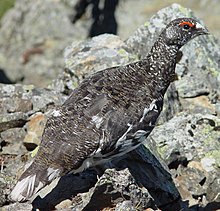 Ptarmigan with a watchful look backwards 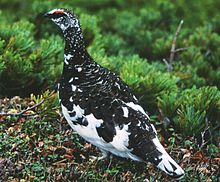 The Ptarmigan ( Lagopus muta ) is a species of bird from the pheasant-like family (Phasianidae). The species is mainly represented in the tundra zone of the entire Holarctic . At present, 25 subspecies are described, some of which are only very weakly differentiated.

In Central Europe , the ptarmigan is an ice age relic that is a widespread to frequent breeding and annual bird in a narrowly defined area of ​​the alpine level. In this area of ​​its distribution area it only makes altitudinal migrations. After the breeding season, there are also large accumulations on undisturbed slopes and scree areas. The ptarmigan can only be found in exceptional cases below the tree line and not at all in lower levels. In the Arctic, however, the ptarmigan migrates before the onset of winter.

At 34–40 cm, the rock ptarmigan is somewhat smaller than the closely related willow grouse , the wingspan is 54–60 cm and the birds weigh between 400 and 550 g. In all clothes the white wings and the black tail feathers are noticeable in flight.

Ptarmigan molt three times a year and adapt to their surroundings with each change of plumage . In winter, as the name ptarmigan suggests, they are almost completely snow-white, only the males have a black underside of the tail and above the eye a red bulge of skin and a black rein stripe. The feet are also feathered white. With the spring moult, the top of the males is speckled: the head and neck, upper chest, back and wing covers as well as the sides are spotted and banded gray-brown, black, beige and white, which ensures a visual merging with the now snow-free environment. The females are generally a little less contrasty in color. With the autumn moult, the white areas disappear completely from the top, only the wings of the hand remain white, as in all clothes. The ptarmigan now have a gray-speckled overall appearance.

Ptarmigan reach their maximum weight in autumn, which then gradually decreases until spring. It rises in the pre- mating season and reaches its minimum in mid-summer. The birds of the northernmost period are generally the largest and heaviest.

Ptarmigan rely on their excellent camouflage . When hikers approach, they stay seated until you almost step on them, and then fly up with a loud roar of wings.

The ptarmigan is represented in a circumpolar manner in the northern hemisphere . It breeds in Eurasia and North America (including Greenland) and is found in the Canadian Arctic Islands, among others, but the range of the species is not closed. Large contiguous areas of distribution exist in North America and Northeast Asia. Many of the northern polar islands are populated by ptarmigan. It occurs on almost all Arctic islands in Canada and populates almost the entire coast of Greenland and Iceland. It is the only species of bird that can be found on Svalbard all year round . In the northern part of the Pacific Ocean it populates the Aleutian Islands , the Commander Islands , the Kuriles and also the main Japanese island of Honshu . The southernmost occurrences in North America are in the Rocky Mountains , where it reaches 49 ° N. Br. And on the east coast of Labrador , where it penetrates to 54 ° 30 'AD.

In Europe, it occurs in Iceland , northern Scandinavia , northern Great Britain, and the Pyrenees and the Alps. In the Pyrenees you can find it from about 1800 m altitude (subspecies Lagopus muta pyrenaica ). In the Alps (subspecies Lagopus muta helvetica ) it stays above the tree line during the breeding season and is then mostly found between 1800 and 2700 meters. In summer and autumn, however, it can usually be found above 3000 meters.

There are similarly isolated sub-areas in Asia, the largest are in the Altai , Sajan and Chamar-Daban . Small ones are located in the eastern Changai , in the center of the Chanchochije Mountains , in the Munch-Charain, in the Saur Mountains and in the Jam-Alin and Dusse-Alin Mountains .

The habitat is dwarf shrub heaths, dry mountain lawns and alpine meadows, moraine and scree areas and snow valleys. During the cold season, the Ptarmigan mainly hangs out on exposed slopes that thaw earlier. In doing so, they often descend to slightly lower elevations than during the breeding season. The selection of the winter debris is mainly based on the food available. These are either areas with grass vegetation from which the snow has been swept away, or tree-shrub vegetation in the forest tundra or in the subalpine belt.

Ptarmigan mostly stay on the ground. In stony terrain with little vegetation above the tree line or in winter they can also be found in the light willow and birch forests at the tree line.

The winter food of the rock ptarmigan consists of terminal shoots and buds as well as leaves of plants such as the crowberry and chamois heather . Willow and birch are important food crops. In northern Europe, however, ptarmigan also eat the terminal shoots of the blackberry and the lingonberry . In Scotland there is a lack of trees whose shoots could be used for nutrition. Here they prefer to eat leaves and shoots of heather, crowberries and saxifrage in the winter months.

During the summer they eat seeds, leaves and flowers as well as berries. Important food plants are chamois heather, rosemary heather, dark berries and blueberries. Leaves and young shoots of willow, seeds of rock flowers and dwarf birch also play a role.

Animal nutrition does not play a role in the Ptarmigan’s diet. Even young birds have a predominantly vegetable diet.

Ptarmigan become sexually mature towards the end of their first year of life and participate in the breeding business in the following year.

Ptarmigan tend to be monogamous birds. The male chooses the breeding ground, while the female is busy building the nest or doing the breeding business. Generally only one female breeds in the territory of the male. There are exceptions in the extreme north, where the populations often have more females. Sometimes two or even three females breed there in the same territory as one male. However, the male prefers one of the females and pays little attention to the second. In extreme cases, the additional females even remain unmated in the area. Birds that are not involved in the breeding business stay together in small groups in summer or live individually in the breeding area.

The Ptarmigan courtship takes place in the evening and night hours. The courtship ritual consists of individual courtship flights and a series of courtship poses performed in front of the hen. in the courtship position the cock spreads its tail feathers, the wings are slightly open and drooping. In this pose, the male stands in front of him or advertises with a series of broken trills.

The nest is a barely padded, flat hollow between stones or under bushes. As long as the clutch is not complete, the female covers the eggs with planting material when leaving the nest. The full clutch comprises 3–11 cream-colored to yellowish-brown eggs with brown spots. The breeding period varies slightly depending on the geographical distribution. In the north of the range the breeding season is usually only 21 days, in the south, however, 23 to 24 days. The male is not involved in the breeding business, but guards the territory from a slightly elevated place such as a mound of earth or a stone and in exceptional cases also from a tree. Intruders are attacked by the rooster regardless of their size. The behavior of the roosters with regard to the defense of the territory and the management of the young birds is different. Most roosters change their behavior shortly before the young hatch. They stop courting and their ties to the territory loosen. Most probably migrate to moulting sites. However, some remain in the area and defend their offspring in the event of attacks.

The chick as precocial immediately after hatching with the mother hunting for insects. After two weeks you can already fly short distances. The growth ends in the south of the area at the age of 3 months and in the north at the age of two months.

At the end of August and beginning of September, the family associations join forces again. In the autumn months these flocks can be very large and consist of up to 300 birds. In the winter months, however, these very large associations break up again into smaller troops that are spread over a wide area. Compared to the red grouse , this behavior makes better use of the food resources. Similar to red grouse, they rest in snow chambers when a loose blanket of snow forms between bushes. The floor of such a snow chamber is 25 to 28 centimeters below the surface of the snow, and rock ptarmigan only need 15 seconds to bury and create such a snow chamber.

The IUCN classifies the Ptarmigan as harmless ( least concern ) because the distribution area is very large. The population trend is negative, but the decrease is so moderate that the IUCN has not yet placed this species on one of its warning levels. The population is estimated by the IUCN at eight million sexually mature individuals.

Continuous monitoring showed that from 2000 to 2010 the Ptarmigan population in the Swiss Alps fell sharply. Ecological models predict that the potential habitat will decrease by up to two thirds by the year 2070 due to an increased average temperature during the breeding season alone . In addition, according to the forecasts, the habitat of the ptarmigan will shift towards the mountain peaks.

The ptarmigan hunt is still practiced in four cantons in Switzerland. Between 2013 and 2015, around 400 to 550 ptarmigan were shot each year. The main share (87 percent) make up the cantons of Graubünden and Valais with a total of 350 to 450 birds killed each year. Between 1990 and 2010, the population in Switzerland decreased by more than 30 percent, which is why further hunting is viewed increasingly critically. Even in Austria, where the ptarmigan is not mentioned in the official hunting statistics, it is still hunted in Vorarlberg and Tyrol .

Between 2005 and 2008, 300 to 350 ptarmigan were shot annually in South Tyrol , with an estimated population of around 2,100 ptarmigan, which corresponds to 15 percent of the total population. In 2014 the Greens achieved a partial success to better protect the Ptarmigan by removing their monopoly of votes for final decisions about kills from the South Tyrolean hunters.