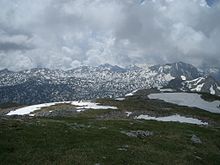 The Hagen Mountains (view from the Schneibstein to the south)

The Hagengebirge is a mountain range of the Berchtesgaden Alps . It is mainly in the Austrian state of Salzburg , the western quarter in the Bavarian district of Berchtesgadener Land . The steep west flank of the Hagengebirge falls around 1700 meters in altitude to the basin of the Königsee .

The Hagengebirge with pronounced plateau formations, especially on the Salzburg side, has an area of ​​around 12 by 10 kilometers. The state border between Germany and Austria runs from north to south through the western half of the mountain range. The border ridge from Schneibstein ( 2276  m ) in the north via Windschartenkopf ( 2211  m ), Hochseeleinkopf ( 2109  m ), Kahlersberg ( 2350  m ), Kragenköpf ( 2176  m ) and Wildalmriedel ( 2269  m ) to the Teufelshörner ( 2363  m ) in the south carries the highest peaks. This chain of peaks divides the mountain range into a western, Bavarian and an eastern, Salzburg part. Below the border ridge, on the German side, from the Hochgschirr pass, located between Kahlersberg and Laafeld, the Landtal runs south towards the Röth and the Schlunggraben north towards the Windscharte. These depressions separate the plateau from the upstream Gotzen Mountains, which drop steeply towards the Königssee, with the peaks of Hohem Laafeld ( 2074  m ), Gotzentauern ( 1858  m ), Warteck ( 1741  m ), Fagstein ( 2164  m ) and Rotspielscheibe ( 1940  m ).

The Hagengebirge is connected to the Steinernes Meer via the Blühnbachtörl ( 2016  m ) and to the Göllmassiv ( Hoher Göll ) via the Torrener Joch ( 1731  m ) . In the north it is bounded by the Bluntau valley , in the east the Salzach valley forms a deep dividing line from the Tennengebirge . To the south it is set off from the Hochkönigstock by the Blühnbachtal , a side valley of the Salzach. About 25 square kilometers of the Hagengebirge and about a dozen peaks are over 2000 meters above sea level, other large areas a little lower. 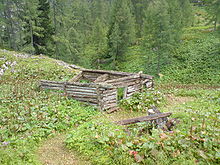 Overland line through the Hagen Mountains. The composite path follows this line.

The western quarter of the Hagengebirge, the Gotzenberge and the Röth, is well developed with paths from the Königssee. The summit of the Schneibstein, which is the northern cornerstone of the mountain range, is relatively easy to access from the Jennerbahn mountain station . The Seeleinsee below the Kahlersberg is also a popular hiking destination. On the Austrian side, ibex were released into the wild from 1924, in the Röth from 1936 , which later united to form a colony and are now found in the entire southern Berchtesgaden Alps.

The Carl-von-Stahl-Haus and the Schneibsteinhaus on the Torrener Joch below the Schneibstein are ideal alpine bases . The Gotzenalm, which is open in summer (the Feuerpalfen viewpoint can be reached in a few minutes), offers mountain hikers overnight accommodation high above the eastern shore of Lake Königsee . In the Röth there is the Wasseralm , a hut of the DAV section Berchtesgaden that is managed in the summer season .

The Austrian part of the mountain is much more inaccessible and lonely as the Bavarian part, but of a 220 kV - transmission line crosses that follows the composite gate. There used to be numerous alpine pastures here , which were connected by a well-developed network of trails. In the meantime, almost all alpine pastures have fallen into disrepair, the paths overgrown and only visible to the trained eye. The reason for this is the fact that this remote part of the Hagen Mountains has long been used as a hunting area and is practically only accessible from Golling and the Blühnbachtal . In the past it was the nobility, later the money nobility ( Krupp von Bohlen-Halbach, today it is the American industrialist Frederick R. Koch ( Koch Industries )) who reside in Blühnbach Castle near Tenneck / Werfen. Today the Hagen Mountains belong to the Austrian Federal Forests . Numerous well-hidden hunting lodges are scattered over the entire plateau. Hikers and mountaineers are not welcome, especially during the hunting season (September to December).

Only on the pastures in the northeast, the Kratzalm and Angeralm, are young cattle (cattle) and horses raised in summer. The northern part of the Hagengebirge, mostly well below 2000 m high, has lush vegetation. Here you can find centuries-old trees, chamois , red deer , ibex , marmots , various birds of prey , alpine newts and adder . The diverse grass slopes have rare mountain flowers and a large part of the area is under nature protection .

Scattered over the Hagen Mountains are megalodonts (“cow's step clams”), shell fossils from the Triassic , visible in large numbers.

Summit in the Hagen Mountains 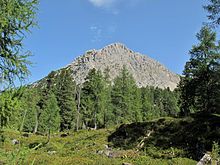 Caves in the Hagen Mountains

There are numerous caves in the Hagen Mountains. Well known - in the past often visited by treasure graves - is the Scheukofen , a cave near the valley near Sulzau in the Salzach Valley. Not far away is the Brunnloch near Stegenwald, a cave that can already be seen from the valley. The bear cave at Torrenerfall (Bluntau valley) is also one of the well-known caves. In the entrance area, numerous skeletons of the cave bear ( Ursus speläus ) were found, which are now in the depot of the “ Haus der Natur ” museum in the city of Salzburg .

The most famous cave in the Hagengebirge is the Tantalhöhle , the entrance of which is high above the Blühnbachtal. According to current knowledge, it is over 34 km long and was found after the Second World War by the Salzburg jeweler and cave explorer Alfred Koppenwallner through systematic searches along the layer boundary of dolomite and Dachstein limestone , the two types of rock that make up the majority of the Hagen Mountains . The Scheukofen entrance is also on this layer boundary.

The research results are collected and published by the State Association for Speleology in Salzburg.

The remains of the Rotwandalm. 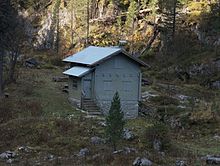 The first detailed description of the area was made by the mountain pioneer Hermann von Barth , who hiked the Hagen Mountains several times in 1873. Since then, the Hagengebirge has changed from an area used intensively for alpine farming to a largely deserted area. Almost all of the former 27 alpine pastures, with the exception of the Grazalm and Angeralm, are no longer used, the buildings are mostly just ruins. Some of the alpine pastures were abandoned for economic reasons, and some were bought up by hunters and hunting parties.

From 1916 on, the Hagengebirge and the Blühnbachtal belonged to the German industrial family Krupp . It has been owned by the Austrian Federal Forests since 1973 .

The high-voltage line built between 1959 and 1961 across the Austrian part of the Hagengebirge transports the electricity from the Kaprun dams to the northern parts of the Salzburg region. Several service huts (not open to the public) were built for line control and the composite path following the line (after the owner Verbund AG ) was created. The largest service hut is on the Krinnalm (between mast 173 and 174) and is usually referred to as the composite hut on the maps. There is an - in this arid region - an important, publicly accessible outside water tap, which is quite reliably fed by a nearby water collection basin (desludged and renovated in 2012). The power line is checked by helicopter in the spring and checked in late summer (overhaul) by employees of the Verbundgesellschaft mast for mast. Although numerous signs on the composite path (line path), originally marked in red and yellow (often fading), prohibit passage, most of the path is now also used by the Alpine Association as path no. 458 and is even re-marked in some places. However, there is a risk of getting lost and falling for those who are unfamiliar with the area, especially in the poorly secured and little-marked steep descent at the southern edge of the mountain range to the Blühnbachtal.