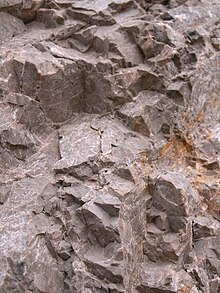 Upcoming dolomite in the outcrop ( Trias of the Slovak Carpathians )

Dolomite , short dolomite is a carbonate - rock which is at least 90 percent of the mineral dolomite ( chemical formula CaMg (CO 3 ) 2 or, more rarely CaCO 3 · MgCO 3 exists). If the dolomite content is lower, there is dolomitic limestone . Dolomite stone is rarely white, often ivory, light gray, gray-yellow or green-gray.

Weathered ruin made of Jurassic dolomitic limestone in the karst landscape of the Cirque de Mourèze , Hérault

Compared to chemically related limestone, dolomite stones are somewhat harder and much more brittle with a similar structure and texture. Like limestone, dolomites are often gray on freshly broken surfaces, but usually weather yellowish or brownish. A first indication of dolomite in the natural outcrop comes from a rather splintery rock surface. This lack of washed-out surfaces is in contrast to limestone. In the terrain, dolomite can also be distinguished from limestone by its very slow reaction with cold, dilute (10 percent) hydrochloric acid : In dolomite, after the application of the hydrochloric acid, almost no carbon dioxide bubbles develop, while the acid in limestone roars vigorously. Due to the lower solution vulnerability to weak acids karst dolomite to a lesser extent and, unlike limestone.

In order to detect dolomite in a limestone / dolomite mixed rock, the rock is colored with reagents that change color on magnesium . An example of this is the test with quinalizarin .

The literature often speaks of a "grainy" appearance. This refers to the structure of fine crystals, which are much finer-grained than today's commercial sugar, but coarser-grained than limestone crystals. The split surfaces glisten visibly in the sunlight . This fine crystallinity is attributable to recrystallization during or shortly after sedimentation . If dolomitization sets in at an early diagnostic stage , structural features and fossils are retained. A late diagenetic dolomitization blurs any structural features and fossils of the parent rock . Therefore, no statement can be made about the fossil content. This often makes the stratigraphic assignment of dolomitic rock formations difficult.

Dolomite rocks were formed either by the primary precipitation of dolomite or by the secondary dolomitization of lime sludge. Recent research shows the importance of sulfur bacteria and putrefaction for dolomite genesis using recent examples of lagoons in Brazil. The corresponding reaction describes the equation:

where MgCO 3 combines with the already existing lime sediment to form dolomite. CH 4 is representative of the organic substance. The magnesium comes from concentrated seawater. Under calm water conditions and with high evaporation rates, as can prevail in the lagoons of tropical reefs, on the one hand the salt content in the lagoon water increases and on the other hand there is hardly any exchange between the oxygen-safe water in the upper part of the water column and the water in the pore space of the sediment. This favors the breakdown of the organic matter contained in the sediment through putrefaction and thus the dolomitization of the sediment.

Reef rocks are relatively often dolomitized. This may be due in part to the porosity of the reef, which allows the solutions to circulate even in greater depths; partly (at least with coral reefs) also because the coral limestone consists of the unstable mineral aragonite, making the transformation easier.

Non- pending , clear signs of weathering, made of chert- leading stromatolite dolomite, exhibited on a road on the periphery of the Johannesburg-Pretoria area ( South Africa ). It is probably the neo-archaic Malmani dolomite, which erupts over a large area in the region .

As a rock, dolomite is widespread worldwide and naturally often occurs in association with limestone. In Europe, dolomites are very common in the geologically young Alpine mountains. Very large deposits can be found in the Eastern and Southern Alps (including the Dolomites ) of the Alps as well as in the Carpathian Mountains and Apennines with the main dolomite of the Alpine Triassic or its stratigraphic equivalents.

North of the Alpine region, dolomite and dolomitic limestones occur in Central Europe in four rock series: in the Upper Devonian carbonate series of the Paleozoic Basement and in the Zechstein (Upper Permian ), in the Muschelkalk (Middle Triassic) and in the Malm / White Jura (Upper Jurassic) of the Table Cover Mountains. Devonian dolomites are found especially in the form of dolomitized mass limestone in the Rhenish Slate Mountains ( Eifel and Sauerland ). Dolomites of the Zechstein series emerge on the edges of the Paleozoic basement eruptions (including the southern Harz rim and the eastern rim of the Spessart crystalline) as well as in the edge area of ​​some trough structures of the table top mountain. Shell limestone dolomite deposits are mined in the Trier Bay in Palzem (Thorn Castle), in Wellen (Mosel) ( underground ) and in Mesenich and in Upper Silesia in Poland. Dolomites of the Weißjuras occur in the Franconian and Swabian Alb .

The Cirque de Mouréze on the southern edge of the Massif Central in the Hérault department offers an example of a small Western European landscape on an outcrop of dolomitic limestone . This occurrence, which is strongly shaped by karst , originated during the Jurassic period .

In terms of age, dolomite deposits are not limited to Phanerozoic sedimentary rock sequences. There is a more than 2.5 billion year old dolomite series with the Malmani dolomite in northern South Africa. In its outcrop are, among other things, the caves that were once inhabited by pre- human beings, which today form the UNESCO World Heritage Sites known as the “ Cradle of Humankind ”. Weathered Malmani dolomite is also traded as a decorative stone under the name Pelindaba Rock . A chronostratigraphically significant Precambrian dolomite occurrence is the Nuccaleena Formation in southeastern Australia, at the base of which in an outcrop in the Flinders Range is the GSSP of the Ediacarian . 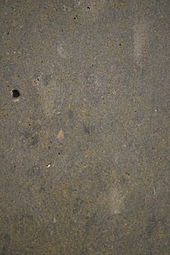 Sample of the Salzhemmendorfer dolomite

The traditionally under the name " Anröchter dolomite known" natural stones from Soest ( Münsterländer Cretaceous Basin ) are no dolomite stones, but more or less quartz sand - and glauconite leading limestones .

Outside the German-speaking area:

Dolomite is used for all types of floor coverings (cut or rough), for the construction of natural stone walls and dry stone walls, as curb stones, as palisades, as stone blocks, as design stone for building retaining walls and as paving stone. When crushed, it is used primarily as an additive in the production of steel in blast furnaces . In addition, it is the main component of mineral wool and technical glasses. It is used in soil stabilization and as fertilizer lime for agriculture. Powdered dolomite is known as "Viennese lime" and is sold as an abrasive; its hardness is just right for scraping off limescale, but leaving glass and porcelain untouched. In so-called crushing plants, the dolomite is also processed into aggregates for road construction and concrete production. As coarse gravel, it is also used to fill gabions (gravel baskets).

Dolomite is named after the French geologist Déodat de Dolomieu (1750–1801). Dolomieu made a journey to what was then known as the “pale mountains” or “monti pallidi” part of the Southern Alps , in the area of ​​the German / Ladin / Italian language borders . According to his previous information, these mountains would have consisted of " lime ". Even if the rock was very similar to limestone in terms of its external appearance and physical properties, he found that, unlike limestone, it only dissolved very slowly in weak or dilute acid . He investigated the problem and found out that the rock was not only composed of "limestone" ( CaO ), but also of "magnesia" ( MgO ) in equal proportions .

Dolomieu wanted to name the new rock "Saussurite" in honor of his teacher, Mont Blanc climber De Saussure , but he died soon after and the scientific community named the mineral and rock after him. That is why the “pale mountains” of the Southern Alps now have a modified name, Dolomieus.