The Ediacarium is a period in the earth's history about 600 million years ago. The oldest fossil finds of multicellular animal life are dated to this period.

The term was officially adopted by the International Commission on Stratigraphy (ICS) in May 2004 and confirmed by the International Union of Geological Sciences . The Ediacarium is named after the famous fossils of the Ediacara fauna from the Ediacara Hills , an area in the Flinders range in the Australian state of South Australia . There the geologist Reginald Claude Sprigg found imprints of apparently soft organisms in 1946, which had been preserved mainly on the underside of quartzite and sandstone slabs. Older names such as the term Vendium become invalid with this official name confirmation.

The beginning of the Ediacariums is the basis of late marinoischen Deckkarbonate (engl. Cap carbonates ) of Nuccaleena formation that the Elatina- diamictite superimpose immediately. The upper limit is the base of the Cambrian , which is defined with the first appearance of the trace fossil Treptichnus (formerly Phycodes ) pedum . The reference profile ( GSSP ) for the Ediacarium is the Enorama Creek profile at 31 ° 19 ′ 53 ″  S , 138 ° 38 ′ 0 ″  E in the Flinders Range in the Australian state of South Australia. However, the absolute dating of the lower limit is still controversial. The maximum age is to be set at 635 million years, the minimum age at approx. 621 million years. Even more precise dates can be expected here in the future. -31.331444444444 138.63338888889

Despite its long duration of probably over 90 million years, the Ediacarium is not (yet?) Divided into stages like the systems or periods of the Phanerozoic . This is mainly due to the rarity of fossils, which in the Phanerozoic were primarily used for further subdivision. Organisms were certainly not uncommon in the Ediacarium, but with a few exceptions these had no hard parts and thus an extremely small fossilization potential. Furthermore, the rate of evolution of the organisms in the Ediacarium seems to have been considerably lower, so that practically no biostratigraphically usable key fossils are known .

Some prominent events can still be used to subdivide the system to a certain extent. The appearance of the first animal fossils, microscopic eggs, embryos and segmented tubes has been geochronologically dated to 599 ± 4 mya. After the Gaskiers Ice Age , which was widespread in the region, the first macroscopic fossils appear in the sediments immediately above in Newfoundland ( Canada ). These are attributed to the Ediacara fauna; they are thus interpreted as the first appearance of this fauna. These layers are dated 579 million years ago. The first traces of bilateral animals or bilateria appear around 555 mya . Around 550 mya, i.e. shortly before the beginning of the Cambrian, the first organisms with mineralized hard parts have already been identified. Most of the Ediacaran fauna became extinct at the beginning of the Cambrian. 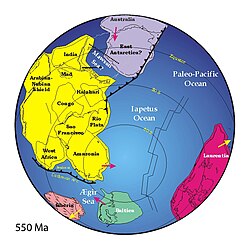 The disintegration of Rodinia had formed three major continents ( Laurentia , Baltica and Sibiria ) and the major continent Gondwana . Gondwana extends from the South Pole to well over the equator and into the northern hemisphere. Laurentia and Baltica were in high southern latitudes, Siberia a little closer to the equator (around 30 degrees of latitude), but also in the southern hemisphere. Northern South America was then near the South Pole, and the Panthalassa also covered the North Pole. Between Laurentia and Gondwana, the Iapetus Ocean had opened up before the beginning of the Ediacarium, and it steadily expanded in the course of the Ediacarium. Between Baltica and Sibiria on the one hand, which were separated by the Aegir Ocean, and Gondwana on the other, a subduction zone had formed in front of Gondwana, through which this part of Gondwana was tectonically deformed and thermally changed ( cadomic orogeny ). Parts of this part of Gondwana broke off several times in the Paleozoic and were later welded to Laurentia and Baltica and today form the subsurface of parts of Central Europe and the east coast of North America ( Avalonia and Hun-Superterran ).

Marine life in the Ediacarium

In the Ediacarium, the first tissue animals (Eumetazoa) probably arose in the sea. Initially, however, they did not have any internal or external mineralized skeletal parts that could be easily preserved as fossils . Accordingly, their fossils are very rare and have only been found in a few areas of the world. They are the first fossils visible to the naked eye. With the discovery of the first Ediacara fossils ( Vendobionts ) from around 575 mya, the term “ Cambrian explosion ” of life is also relativized . Therefore one speaks today of the Cambrian radiation .

This development to the tissue animals took place after several presumably global ice ages had previously dominated the climate on earth ( snowball earth ). The Marino Ice Age was the last of these great ice ages and the basis of the post- Ice Age "Cap Carbonate" also defines the beginning of the Ediacarium. The “Cap Carbonates” are currently seen as an indication of the strong warming after the end of the Ice Age or the very rapid melting of the ice and the rise in sea level. Immediately above the last tillites , the first animal fossils appear in the phosphorites of the Doushantuo Formation ( Guizhou Province , South China): microscopic eggs, embryos and segmented tubes and the first representatives of the bilaterals such as Vernanimalcula . They have been geochronologically dated to 599 ± 4 mya. The oldest macroscopically visible fossils were discovered in 2003 in the Drook Formation of Newfoundland, with Trepassia wardae as the oldest fossil in the Ediacaran fauna . These layers are dated 579 million years ago. Kimberella , one of the oldest Bilateria fossils, was found on the Russian White Sea coast in sediments of the Ust Pinega Formation, which have been dated to around 555 Ma. The first traces and structures were found in the same sediments. Around 550 Ma, i.e. shortly before the beginning of the Cambrian, the first organisms with calcified hard parts have already been identified ( Cloudina , Namacalathus ), through which Cloudina was also able to form reefs. The oldest spicules of sponges have also been described from these layers . At the end of the Ediacarium, most Ediacarium forms disappeared, only about a handful crossed the Ediacarium-Cambrian border. The last Ediacara forms are proven from the Upper Cambrian.

Almost nothing is known about the flora of the Ediacarium. The development to higher plants did not take place until the Paleozoic . Hence only microscopic vegetable life can be assumed in the Ediacarium. Red algae, yellow-brown algae and green algae were certainly already present.

Ediacaric rocks are mostly open on a small scale in some German low mountain ranges ( Thuringian Slate Mountains , Ore Mountains ) as well as in Great Britain , Scandinavia and Eastern Europe . However, the typical Ediacara fossils were only found in a few localities (e.g. in Russia, Sweden and England).

The following lithostratigraphic units in Europe fall into the Ediacarium:

The "Golden Spike" of the Ediacarium at the base of the Nuccaleena Formation in the GSSP outcrop at Enorama Creek, Flinders Range, South Australia

The following lithostratigraphic units outside Europe fall (partially) into the Ediacarium:

A series of articles in FAZ.NET with pictures of the Ediacaran fauna: