This article describes the aquatic animals. For other meanings, see sponge .

The sponges (Porifera, Latin porus 'pore' and ferre 'carry') form an animal strain within the multicellular animals (Metazoa). They all live in water and are found in all ocean waters on earth. Only a few species live in fresh water, such as unusually large (up to man-sized) specimens in the Staffelsee .

There are over 7500 species from a few millimeters to over three meters in height. The shape of most species depends on diet and environment . In contrast to tissue animals (eumetazoa), sponges have no organs and no neurons to process signals. They live sessile , preferably on hard soil, but can also form coatings on plants or mollusc shells. The majority of the sponges feed themselves through filtration .

Significant fossil sponges are the stromatopores , which were important reef builders in the Paleozoic (Earth Age), especially in the Devonian , and Mesozoic (Earth Middle Ages) . That branch of special zoology which is devoted to the study of sponges is called spongiology .

Although sponges are made up of various specialized cells, they have no muscle, nerve or sensory cells. The sponge body can be divided into the following three basic types of cells:

The pinacocytes form the plate-shaped top layer ( pinacoderm ) of the sponges. In the top layer are the ostia , small pores that serve to absorb water and lead the water through a system of canals into the central cavity (gastral space, also known as spongocoel).

The Choanozyten is collar scourge cells by pounding a scourge produce a stream of water from which they primarily through the microvilli filter pile collar small food particles. Collar flagellum cells digest the food and pass parts of it on to other cells. When these are full, they transform into simple nutrient cells, penetrate the middle layer and supply the other cells there. They sit around internal cavities (flagellum chambers).

Amebocytes (ameboid cells) are cells that wander around in the body of the sponges (Porifera) with their mobile pseudopods (ameboid) and z. B. distribute the nutrients that they receive from the choanocytes or in their vicinity by phagocytosis . They also absorb and release messenger substances and thus perform functions that are comparable to those of a primitive nervous system.

The amoeboid cells can be differentiated in different ways. One finds:

The amoeboid cells are embedded in a colloidal gel, a cell-free basic substance. In the gel, the scleroblasts form skeletal elements, the sponge needles.

The amoeboid cells, the colloidal gel, the skeletal elements and the pinacocytes are summarized as the dermal bed (derma = skin). The entirety of the choanocytes is called gastrallager ( gaster , ie 'stomach'). 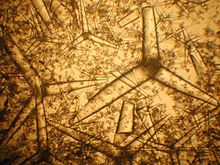 The skeleton consists of sclerites (also known as micro- or megasclera), so-called spicula ( lat.sing.spiculum ; arrow, needle), which are a product of the sclerocytes and either made of calcite , a form of calcium carbonate ( lime sponges ), or Silicic acid (silica sponges) consist. The shape of the spicula is important for the classification of recent and fossil sponges.

Skeletal remains of the pebble sponge are partly contained in the so-called rattle stones.

Depending on the design of the gastric space, three types of construction can be distinguished:

Ascon type
Tubular, thin-walled body with a central cavity with undifferentiated walls and only one central outflow opening (osculum). This type is always very small, since the ratio of body surface to mesohyl is very unfavorable (maximum 2 mm in size). The epithelium is on the outside and the collar flagellum cells are on the inside.
Sycon type
Around a large cavity, the choanoderm is embedded in the mesohyl through radial tubes (in which the choanocytes are located), which increases the surface area. Sponges of this type reach sizes of a few centimeters. Thick-walled body, lined with collar whip cells.
Leucon type
The most differentiated building type, the mesohyl of which is interspersed with flagellated chambers (branched canal system with spherical chambers) and is strongly thickened. In this way an optimal surface enlargement is realized. All large sponges have this type. The body is very thick-walled.

Archaeocytes, amebocytes, choanocytes and also pinacocytes absorb the food particles contained in the water by phagocytosis . They feed by swirling in water from which they filter out food particles. The collared flagellum cells create a stream of water in the inner cavity by striking the flagella (where the nutrients are taken up). The water enters through the small inflow openings, ostia, and passes through channels into the inner cavity gastral space . The water exits again through a pore on the top of the animals, the osculum.

A carnivorous diet has been described for Asbestopluma hypogea ( Cladorhizidae ) . The nutrient-poor deep-sea cave dwelling sponge has lost its choanocyte system and catches small crustaceans with filaments that are covered with hook-like spicula. The prey is then digested by amebocytes.

So far, 3 species were known to be carnivorous before Australia. In 2017, during a deep-sea expedition off the east coast of Australia, researchers from the Queensland Museum and scientists from the Ludwig Maximilians University in Munich discovered 17 more new carnivorous sponge species, mainly at a depth of 2000 to 4000 m, and described them in Zootaxa in May 2020 .

Despite their simple cellular structure, the physiology of the sponges is more complex than long thought. Sponges are able to perceive light, mechanical stimuli, water currents and sediment deposits and react actively to them. Not only their larvae, but also adults of some species are capable of (albeit more slowly) active locomotion. The ability to contract in waves and then re-expand has been observed in numerous species, which presumably makes water exchange in the internal cavity system more efficient. The movements of sponges are due to organized bundles of actin filaments in certain pinacocytes. Signal transmission in tissue takes place both chemically and through electrical action potentials (so far only reliably proven in one species). Numerous molecules have been found in sponges that serve as neurotransmitters in the Eumetazoa, such as adrenaline , noradrenaline and serotonin . Although there seem to be no specialized nerve cells, sensory cells or real muscle cells, sponges can perform numerous functions of these cell types in a similar way to the higher multicellular cells.

Sponges are segregated or hermaphrodites that can reproduce sexually or asexually. Sperm usually arise from choanocytes and egg cells from large archaeocytes. With asexual reproduction, there is a constriction of cell associations on the body surface, one speaks here of budding, or the cell associations remain and thus colony formation. There are no genital organs in the strict sense of the word in sexual reproduction. After being deposited in the water, the sperm are curled into the collar flagellum chambers by neighboring sponges, from where they are transported into the mesohyl to an egg cell. A larva develops from the egg cell, with different types of larvae occurring.

The larva of the calcareous sponges and the Homoscleromorpha (a subclass of the horned silica sponges) is, for example, a free-swimming blastula that attaches itself to the urinary region and gastrulates .

Sponges can reach a very old age, for example the oldest known living sponge of the species Scolymastra joubini is at least 10,000 years old and is therefore one of the oldest living things on our planet. He lives in the Southern Ocean and has frequently been examined there by scientists who based his age his - very small - have determined oxygen consumption: the less oxygen needs an animal in relation to its body size, the lower its growth and all the older it is.

Many limnic sponges have the ability to develop stages of persistence, so-called gemmulae ( gemmula = small bud , also known as hibernacle ). These consist of dikaryotic (binuclear) archaeocytes, which are covered by a layer of spongin and special needles (spicula). However, even in the simplest case, residual bodies (reductions) are formed. The trigger for the development of these permanent stages are poor environmental conditions, such as a lack of nutrients, or, in particular with freshwater sponges, the change of the seasons. 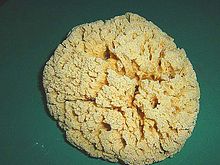 The skeletons of the group of horn sponges (Dictyoceratida) are free of spicula (needles) and consist of a network of flexible spongin fibers. Through a process known as maceration , the cell material is dissolved and flushed out. The spongy skeleton obtained in this way is very suitable as a utility sponge ( bath sponge ) due to its absorbency . The artificially produced cleaning sponge derives its name from the sponges due to its properties and structure.

Furthermore, sponges are now grown in aquaculture in order to extract various chemical substances from them, which are mainly used in medicine.