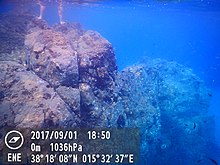 Lively rock reef as a submarine continuation of the rocky coast near Messina (Acquarone cliff), Sicily

A reef ( Old Norse rif "rib; reef") is a more or less elongated elevation that rises from the bottom of the water towards the surface. A reef can lie deep below the water surface, reach up to it or protrude beyond it. The body of water is usually a shelf sea .

There are essentially three different forms:

While rock and sand reefs are usually only called that when they form a shallow or penetrate the surface of the water, the term is also used for biogenic reefs when they are relatively far below the surface of the water. Here the term “reef” has not only a morphological, but also an ecological reference: “Reef” as a term for a habitat or an ecosystem . In this sense, elevations that consist of solid rock and do not form a shoal, but are densely populated with invertebrates without limestone skeleton, are called "reefs".

However, these are not biogenic reefs in the true sense of the word, because “biogenic” means that the reef body as such was built by invertebrates, so-called reef builders . The most famous biogenic reefs are coral reefs . They are mainly built up from colonies of hard corals . The Great Barrier Reef off the northeast coast of Australia is perhaps the most popular example of a coral reef complex. Smaller reefs can also be formed by other firmly growing animals, e.g. B. Oyster reefs . In marine regions where reef-building organisms live, reefs can arise through human intervention (→  artificial reef ).

Throughout the history of the earth, each epoch has had its preferred reef builders. As early as 2-3 billion years ago, in the Precambrian , the activity of blue-green algae gave rise to the so-called stromatolites , which could grow into relatively large, reef-like structures (blue-green algae are still less involved in reef building). In the Silurian and Devonian (approx. 440–360 mya ) stromatopore reefs predominated, during the Cretaceous Period , approx. 100 million years ago, mussels with a coral-like appearance, the so-called rudists , were important reef builders.

Biogenic reefs are geologically very important. The rocks resulting from the biogenic reef formation are called reef limestone . Uncovered fossil reef complexes can be found as mass limestone in almost all mountains, including the Guadalupe Mountains in Texas, the Rhenish Slate Mountains in western Germany and the Dolomites in northern Italy.