The habitat corresponds to the biological sciences the concepts of habitat (smallest cohabitation of various kinds ), biome (major habitat, primarily by typical vegetation types differentiated - such as "tundra", "desert" or "mixed forest") and Habitat / location (habitat of certain animals - or plant species in a biotope) or biosphere (the entire habitat of all living beings).

In the human sciences , the term describes the (inhabited or claimed) space of a social group . The term made a career in geopolitics in the first half of the 20th century and especially in the time of National Socialism , which has significantly impaired its use since then.

"Living space" as a political term

The discussion about the habitat of peoples developed in the last decade of the 19th century in connection with imperialist colonialism . It received its main impetus from the massive European emigration overseas in the 19th century , especially to the USA . It was tied to the rise of national self-confidence in the European nation-states , in which, with the interstate borders, there was a feeling for the territorial national dimension for the first time. The emigration raised the question of what had to be done so that the aspiring labor force did not enrich foreign economies, but rather was preserved and connected to their own country. The acquisition of colonies was seen as a way out along the lines of the British Empire , which had expanded unrivaled since the Seven Years' War after France was defeated and its most important overseas possessions had to be ceded to England.

In France, the discussion started in the first half of the 19th century, after the conquest of Algiers in 1830, which was seen as a starting point for the formation of settlement colonies. Starting from them, with border colonization Algeria for France should also be opened up and captured with settlers from other European countries. After the defeat in the Franco-Prussian War , it was above all the Alsatians and Lorrainers , who felt they belonged to France , who had to be housed and who aspired to Algeria.

Germany after the establishment of an empire

→ Main article : Habitat in the East

In Germany, as a nation-state that emerged late, the search for a national solution to the demographic problems that had emerged in a third large wave of emigration in the 1880s was only needed after the founding of the Reich in 1871. As an alternative to emigration, Germany has since acquired colonies. The geographer Friedrich Ratzel dealt with these questions and examined them in his books Political Geography (1897) and Der Lebensraum (1901), which is subtitled A Biogeographical Study . The circumstances and the environment in which it came about show “Lebensraum” as a term that was created for its political instrumentalization: Ratzel was a member of the Pan-German Association .

The first chairman of the Pan-German Association was Ernst Hasse , member of the Reichstag , who held the chair for statistics and colonial policy in Leipzig. Hasse wrote a second edition of a book entitled Großdeutschland und Mitteleuropa around 1950 . By the middle of the 20th century, he foresaw a German federal state that was to encompass "the state summary of all of Central European Germanness", extending to the east and especially southeast to the Black Sea. Because "to the southeast and east there are no natural limits to the development of Germanness [...] Also in the future it will be no other than that the people's power of the Germans push forward there." The Balkan countries are to be Germanized .

So from the beginning, “living space” meant territorial claims and served as an argument to justify territorial European expansion , which was expressed more explicitly in the national movement even before the First World War as the demand for “ living space in the east ”. The decisive impetus for this narrower term arose from the closer demarcation and above all from the eastern reduction in size of the German Empire, including the fall of the Habsburg monarchy in Austria as a result of the First World War.

1926 reinforced the turned-word novel entitled people without space by Hans Grimm , the idea of a to be acquired habitat. This was to be achieved by expanding the German settlement area in border colonization or in newly acquired overseas colonies .

In the Weimar Republic , Wilhelm Ziegler presented the tasks to be solved by German politics as follows:

“The loss of the mouth of the Rhine, the non- settlement of the central Vistula , the fragmentation of the settlement on the central Danube - these are three serious failures of our past. [...] The Vistula lowlands form the Polish corridor , the lifting of which is undoubtedly the next task for the German future. […] But even then (12th century) a peculiar short-sightedness caused a gap in the German settlement bloc between the Oder and the Vistula, which later was never completely filled by replenishment. [...] Even modern German politics preferred to let millions of German peasant sons go abroad rather than fill this gap between two rooms in their own house. "

It is important that the term "Lebensraum" is German, but that it was the unspoken guiding principle that determined the discussion about the colonization of Algeria that was held in France at almost the same time, but that it would appear more literally as espace vital in French. The French political philosophy teacher Olivier Le Cour Grandmaison drew attention to this in 2005. The idea of ​​living space determined the point of view of three influential spokesmen in France without precise terminology: that of the experienced doctor Eugène Bodichon (1810–1885), the lawyer Arthur Girault (1865–1931) and Paul, who was honored by the Academy of Moral and Political Sciences Leroy-Beaulieu (1843-1916).

“Colonization is a condition for internal peacekeeping. If the art of governing consists mainly in giving everyone their place, then the most delicate task of government is surely to find a use for the adventurous, discontented, and undisciplined minds. How many active and intelligent people become dangerous outclassed who could have made themselves infinitely useful in a different environment than theirs, which is determined by strict morals and rigorous regulations! The colonies offer them a precious field for development. "

“A people who colonize lays the foundations for their greatness and future supremacy. All the vital forces of the colonizing nation are augmented by the overflow of its abundant activities. "

Or another author ( Louis Jacolliot ):

“From a humanitarian point of view, also in the social interest and in relation to the vast areas that are not used by their residents, a people has the right to expand outwards, to open up new paths for the day when it is its cradle will have become tight. That is the true and honorable struggle for life. " 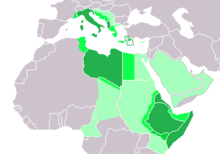 According to the Italian fascists, the right to conquer living space ( spazio vitale ) was reserved for a select few nations. As early as 1922, Mussolini talked about making an “Italian lake” out of the Mediterranean. In 1934 he announced a march to the Atlantic through French North Africa and to the Indian Ocean from Italian Libya via Sudan to Italian East Africa . It was based on the Romanità movement. The new Italy should once again spread culture and progress as in the times of the Roman Empire. A piccolo spazio was planned to be inhabited only by Italians and a grande spazio to be inhabited by other nations but under Italian control. This Italian imperial project with its mission of civilization differed from the German model of living space because it envisaged the permanent survival of the dominated ethnic groups. In contrast to the English and French colonial empires, the Italian should also be racially subordinate to white European Christians.

The concept of the spazio vitale became a metaphor for superiority and vitality and combined the abstract fascist ideas of the Italian elite, violent actionism and historical sense of mission with a historical and geopolitical expansion goal. The attempt to implement it in the occupied territories failed because the reality of the occupation, with its dependence on the German Reich, was very different from the fascist projections and their ambitions. 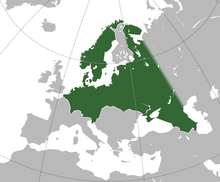 Key words for the time of National Socialism were, before many others, Adolf Hitler , who had already laid down his ideas about living space based on Friedrich Ratzel in Mein Kampf , the Nazi ideologue Alfred Rosenberg with his book The Myth of the 20th Century , in which "Lebensraum" The key term next to “ race ” is the geographer Karl Haushofer , but also the constitutional lawyer Carl Schmitt with his so-called large-scale theory.

Rosenberg wrote, for example: "Another insight lies in the observation that the idea of ​​popular honor, which cannot be grasped with hands, shows its roots in the most solid, material reality: in the soil of a nation, ie in its living space." Hjalmar Schacht as an important pioneer of National Socialism made the simple demand in a speech in Munich on December 7, 1930: "Give the German people living space in the world again."

In the General Plan East , which existed in several variants until 1942 , a “Germanization” of the Eastern European area up to the Urals and the Black Sea to the Caucasus was planned. The concept of living space was initially realized during the attack on Poland and the Barbarossa company with the ensuing German-Soviet war . The last version of the plan also included settlement regulations for the Protectorate of Bohemia and Moravia , Alsace-Lorraine , Lower Styria and Upper Carniola .

In space research , the habitat - for previously known life - is also called the “Goldilocks zone ” or habitable zone .