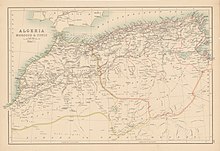 Algeria, Morocco and Tunisia in the 19th century

French North Africa ( French Afrique française du Nord ) was the name for the French possessions in the North African Maghreb in the 19th and 20th centuries.

French North Africa was never an administrative unit, but an informal term for the protectorates of Morocco (with smaller areas in the north and south of Morocco being the Spanish protectorate ) and Tunisia and Algeria - consisting of 3 departments as part of metropolitan France in the north and the Sahara - and smaller parts of Libya . The former colonies of French West Africa were geographically connected to the southwest and south .

The conquest of Algeria began in 1830 and was largely completed by 1847 with the French victory over Abd el-Kader . In the Second French Republic from 1848, the northern part of today's state of Algeria, divided into the departments of Algiers , Oran and Constantine , became part of mainland France . At the head of the government in Algeria since 1871 was a governor-general in Algiers, who combined civil and military authority in his person and depended on the French Ministry of the Interior for political administration, and on the ministries concerned in all other matters. A council made up of high officials and representatives of the citizenry stood by his side for civil matters. The three departments of Algiers, Oran and Constantine each split up into a Territoire militaire and a Territoire civil . The latter was again divided into arrondissements, while the Territoire militaire was divided into divisions and subdivisions. The Territoire civil had a population of 3,873,278 in 1896, the Territoire militaire one of 556,143 people. The Arab population still formed Duars and Ferkas (communities), Uls (tribes) and Arraliks (associations of several tribes).

In 1881 Tunisia was also occupied. Under this military pressure, Sadiq Bey submitted to a French protectorate with the Treaty of Bardo (also Treaty of Ksar Said ) . The Bey gave up its independence in foreign and defense policy, as well as in relation to ongoing administrative reform. Corresponding decisions could only be made in consultation with the respective French Minister- Resident.

In 1912 Morocco was also occupied. In the Treaty of Fez , the Sultan Mulai Abd al-Hafiz forcibly renounced his sovereignty over Morocco in favor of France. The French Morocco protectorate was established. The head of state officially remained the sultan. Northern Morocco had to be ceded to Spain as the protectorate of Spanish Morocco , while Tangier was given international status . The French military was only able to break the armed resistance of Moroccan tribes towards the end of the 1920s (see Rifkrieg 1921 to 1926 ).

The region became a theater of war during World War II when American and British troops landed in French North Africa on November 7, 1942 as part of Operation Torch . The German and Italian units of the Panzer Army Africa withdrew from Libya to Tunisia in order to stand in the way of these troops and also of General Montgomery's British 8th Army advancing from Libya from the east . This military confrontation (known as the Tunisian campaign ) ended in May 1943 with the surrender of over 200,000 Axis soldiers .

Because of increasing protests and unrest in the population of Tunisia and Morocco, the two states obtained their independence in March 1956. But France continued to try to keep Algeria as part of its national territory. French citizenship was granted to all Algerians in September 1947 (Algeria Statute). On August 7, 1955, the department de Bône was created from the western part of the Département de Constantine . In 1957 the four departments were divided into 17 new departments .

But even Algeria could not be held against increasing protests and unrest in the population. The Algerians carried out terrorist attacks against French soldiers and civilians. The French military employed what is known as the " French doctrine ", which included summary executions, torture and the wiping out of entire Algerian villages. This was initially militarily successful, but because the systematic human rights violations became known, it ultimately led to a significant weakening of domestic and foreign policy in France and forced the Évian treaty to be signed on March 18, 1962 in Évian-les-Bains . The National Liberation Front (FLN) declared the country independent on July 5, 1962 after the long and bloody Algerian War . The European minority in the country fled almost completely after the country's independence.