William Ewart Gladstone (born December 29, 1809 in Liverpool , † May 19, 1898 in Hawarden Castle ) was a four-time British Prime Minister and one of the most important British politicians in the second half of the 19th century. He was a member of the House of Commons for 63 years, a member of the Cabinet for 27 years, and Prime Minister for 12 years.

William Ewart Gladstone came from a wealthy merchant family. He was educated at Eton College and Christ Church College , Oxford . At first he wanted to be an Anglican priest, but in 1832, like his father, he became a Conservative MP in the House of Commons.

As early as 1834, Gladstone took over smaller offices in the Peel government for the first time . In parliamentary debates, the young man stood out for his rhetorical talent. In 1841 he became Vice President of the Ministry of Commerce and in 1843 Minister. In these functions he achieved the simplification of the customs system , the lowering of tariffs and a general change in the British economic system towards free trade . In 1845 Gladstone resigned because of religious disputes and was appointed Secretary of War and Colonial shortly thereafter . 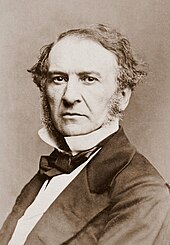 The following year he resigned in connection with the fall of Peel. In the years that followed the split in the Conservative Party, Gladstone remained the leader of a larger conservative group of Peel supporters, which, however, became increasingly less important, especially after Peel's death in 1850. During this time he tried to save his wife's fortune threatened by the financial crisis of 1847, was Chancellor of the Exchequer under Aberdeen from 1852 to 1855 and in 1858 published a three-volume work on Homer and his epoch. In addition, Gladstone approached the liberal Whigs during this period , but turned down offers of a ministerial post by the Earl of Derby in 1852 and 1858 .

The high phase of his political activity, now clearly marked by liberalism, began when Gladstone entered the Palmerston Whig government as Chancellor of the Exchequer on June 6, 1859 . In his tenure, which lasted until 1866, he promoted free trade, simplified budget legislation and supported the Cobden Treaty , which from 1861 onwards massively promoted trade with France. In terms of foreign policy, Gladstone campaigned for the formation of an Italian nation-state .

In late 1867, Gladstone was elected chairman of the Liberal Party , as the Whigs had come to call themselves. This made him the most important opponent of Benjamin Disraeli , who had brought the conservatives back to government in February 1868, but was overthrown again in December, not least at Gladstone's instigation. Gladstone then took over the post of Prime Minister. The main focus of his policy was the defusing of the conflict in Ireland, the introduction of compulsory education including a fundamental reform of the education system as well as the reform of the electoral law, the judiciary and the recruitment of civil servants. He also prevented the purchase of officer positions in the British Army . In terms of foreign policy, however, the first Gladstone government was hardly active.

When the Liberals lost the election in 1874, Gladstone temporarily withdrew from politics to devote himself to theology and his Homer research. In 1874 he was elected to the American Academy of Arts and Sciences and in 1881 to the American Philosophical Society . The brutal crackdown by the Ottoman Empire against the Bulgarian national movement in the April uprising and the silence of the second Disraeli government on this matter brought Gladstone back into active politics in 1876. It was with this foreign policy issue that Gladstone began his Midlothian campaign in 1879 , the momentum of which was a decisive factor in Gladstone's appointment as prime minister after winning the general election of 1880. His second government accordingly acquired a sharper foreign policy profile and a benevolent profile towards the national movements. This brought the United Kingdom into conflict not only with the Ottoman Empire, but also with Austria-Hungary. With a new electoral law in 1884 Gladstone doubled the electorate.

During the Urabi movement in Egypt, Gladstone initially acted hesitantly, despite Britain's extensive financial ties with the country. Only when Ahmed Urabi Pasha had raised his own army, brought the whole country under his control and threatened the connection to British India via the Suez Canal , did he change his policy and let Egypt be occupied. Due to the dire situation of the Egyptian troops in Sudan, he ordered Egypt in December 1883 to give up Sudan, where the Mahdi uprising had broken out. The appointment of General Gordon as governor in Sudan he approved only of necessity and under pressure from General Garnet Wolseley. Gordon received the order to withdraw the Egyptian troops and the English personnel from Sudan. When Gordon was besieged in Khartoum , Gladstone did not send relief troops because he wanted to give up Sudan anyway . On the other hand, he could not sacrifice Gordon, who was celebrated as a national hero in his homeland, and asked him to save himself. Gordon could not and did not want to comply with this demand, since Khartoum was already surrounded by 50,000 Ansar fighters of the Mahdi. In the summer of 1884 the discussion about the rescue of Gordons expanded to a motion for a vote of no confidence in the government. Gladstone finally had to give in and sent an army under Garnet Joseph Wolseley , the so-called Gordon Relief Expedition , which arrived too late in Khartoum.

When Gladstone wanted to meet numerous demands of the Irish national movement with the first Home Rule Act in 1886 , this led to the split in the Liberal Party and the overthrow of his government, which was followed by a phase of conservative dominance.

From 1892 to 1894, Gladstone was once again prime minister for a short time in old age, but then withdrew from active politics for good, almost blind and hard of hearing.

The Gladstone Professor of Greek , the Department of Greek Studies at Liverpool University , is named after William Ewart Gladstone.

In the British film Khartoum (1966), Gladstone is portrayed by Ralph Richardson .