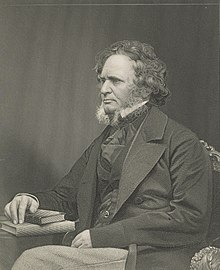 Stanley was born the eldest son of seven children of the 13th Earl of Derby and his wife Charlotte Margaret Hornby in their parents' estate, Knowsley Hall . From 1811 to 1817, he attended the College Eton , he went to the Christ Church College of Oxford University .

In 1822 he was elected as Whig to the House of Commons . When the Whigs returned to power in 1830, Stanley became Minister of Ireland under Earl Gray . In 1833 he took over the more important post of war and colonial minister . After his resignation the following year, Stanley had some differences with the Conservatives . In 1835 he moved to the Tories and supported Robert Peel , in whose second cabinet he again took over the Colonial Ministry.

In 1844 he was given the title 2nd Baron Stanley of Bickerstaffe , a subordinate title of his father, by a special royal resolution ( Writ of Acceleration ) , so that he became a member of the House of Lords during his father's lifetime . When his father died on June 30, 1851, he inherited his title as 14th Earl of Derby . On February 28, 1852, as Prime Minister, he formed his first cabinet  - a minority government that was replaced in December of the same year. Benjamin Disraeli received his first important office as Chancellor of the Exchequer in this government .

Stanley was a successful owner of race horses . In 1856 his horse Fazzoletto won the 2000 Guineas .

On February 20, 1858, Lord Derby became Prime Minister for the second time. Although the government was replaced after a year, the decisions to take over British India from the British East India Company under direct state control as a crown colony were made during this time . In 1859 he was accepted as a knight in the Order of the Garter .

During Derby's third term from 1866 to 1868, an electoral reform took place, through which the new industrial cities received for the first time significant representation in the House of Commons, while the number of seats in the Rotten boroughs was reduced. When Derby resigned in 1868 for reasons of age and health, Disraeli took over the office of Prime Minister.

Lord Derby remained a member of the House of Lords until he died on October 23, 1869. He was buried in St. Mary's Church in Knowsley. Today he is considered one of the founders of the Conservative Party .

Edward Smith-Stanley is the namesake of Stanley , Hong Kong.

In 1825 he married Emma Caroline Bootle-Wilbraham, with whom he had three children, two sons and a daughter.