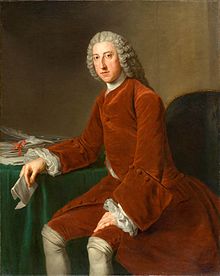 William Pitt was given a seat in Parliament in 1735 by the Duchess of Marlborough , where he put his brilliant speaker talent into the service of the opposition to Robert Walpole . In 1746 he became Vice Treasurer of Ireland and soon afterwards a member of the Privy Council and Paymaster General of the Army. After he resigned from this position in 1755, he was appointed First Secretary of State for the Southern Department in 1756 , but received his dismissal after only two months, as he only fought the war with consideration for the English interests and without consideration of the Hanoverian hereditary lands of the king wanted to be led. But public opinion was so firmly on his side that after a few months he was reinstated. In addition, he became Leader of the House of Commons . He now led the rudder of state so skillfully and powerfully that Great Britain soon gained the greatest advantages over France in all parts of the world. The tremendous successes of his politics meant that the great statesman was soon idolized by the people. When he was after George III. When he found out about the succession dispute between France and Spain , he pushed for a declaration of war against Spain, but was overruled by the influence of John Stuart, 3rd Earl of Bute in the cabinet and therefore resigned on October 5, 1761.

In 1762 and 1765, Stuart tried in vain to get him back into the cabinet. Pitt rose to head the Whigs and remained in opposition. From 1766 to 1768 he took over as Prime Minister a cabinet made up of men from all parties, in which he reserved the post of Lord Keeper of the Seal. At the same time he entered the House of Lords with the newly created title of Earl of Chatham . When the measures were taken against the North American colonies, he advised moderation in vain. But when the ministers urged peace after the alliance between the USA and France had been concluded, Pitt hurried from the sickbed on April 2, 1778 - he had suffered from severe attacks of gout since his youth, for which he had even been given permission to speak in parliament to keep seated - in the upper house and prevented that with a poignant speech. No sooner had he finished than he passed out; soon afterwards, on May 11, 1778, he died on his Hayes estate.

The former French Fort Duquesne ( Fort Pitt ), destroyed during the French and Indian War in 1758 and rebuilt by British troops, was named after Pitt , on whose territory the city of Pittsburgh later emerged. The Pittsburgh city flag is modeled on the Pittsburgh family crest, and the city borrowed his family's motto.

His heir was the politician and officer John Pitt, 2nd Earl of Chatham . His younger son William Pitt the Younger (1759-1806) was Prime Minister of Great Britain twice.