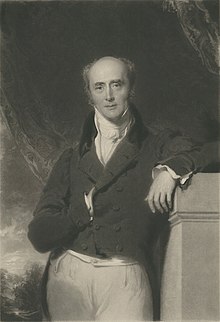 Charles Gray was at Eton College and at Trinity College of the University of Cambridge designed traveled then France , Spain and Italy , and was only 22 years old, for Northumberland from lower house elected. In his maiden speech against William Pitt's trade treaty with France in 1787, he showed excellent knowledge of French conditions. At first he was close friends with the Prince of Wales (later George IV ), but soon a tension arose between the two because Gray refused to commit an act of dubious honesty in favor of the prince.

Since then his relationship with the prince has been cold; in spite of this, however, he was an ardent defender of its rights when, in 1788, when the king fell ill, a regency was to be appointed. In 1792 Gray began the fight for parliamentary reform by handing over the famous petition to the Society of Friends of the People, which he helped to found, which asked for the abuses in the British representation system to be eliminated, for the restoration of three-year parliaments and for provisions to reduce electoral costs. On these and other petitions of the same kind, Gray built a motion to set up a committee of inquiry in 1793, but it was rejected. After Grey's father was elevated to Earl in 1806, Gray was given the courtesy title of Viscount Howick, became First Lord of the Admiralty in the Government of All Talents after Pitt's death, and Secretary of State after Fox joined him a few months later .

After the dismissal of this Whig Ministry and the formation of the Portland government , Gray sat in the opposition for 23 years and participated in particular in the suppression of the slave trade . As his father's heir, he had entered the House of Lords in November 1807 , where he took over the leadership of the opposition, without being able to fully maintain his former popularity. He was negotiated twice, in 1809 and 1812, about assuming a ministerial post; but the negotiations failed both times: in 1809 because he could not hope to get the king's approval for Catholic emancipation , in 1812 because his demand to fill the first court posts in order to break the influence of the camarilla was rejected.

In 1815, after Napoleon's return from Elba, Gray defended France's right to regulate its own constitution and spoke eloquently against interference in the country's fortunes. During the infamous trial of Queen Caroline , wife of George IV, Gray stood out as her defender.

He also remained in opposition to the Canning government , but supported Wellington's resistance to the Corn Laws , which cost him a large part of his popular reputation, which he was only able to regain with difficulty through his advocacy for the emancipation of Catholics.

After the Wellington government dissolved in November 1830, Gray took the lead as prime minister of a new one, which committed itself to "parliamentary reform , reduction of the state burdens and non-interference in the affairs of foreign states". The Reform Act introduced by his government , with which Gray wanted to reform the discredited suffrage and abolish a large number of rotten boroughs , was adopted by the House of Commons in 1832, but rejected by the Lords.

Gray then resigned, but rejoined the government a few days after Wellington had given up his opposition to the bill, which came into effect in June 1832. Gray was less in line with his program of reducing government spending, and in fact drew such fierce rebuke through his poor law and his measures against Ireland that he left office on July 17, 1834.

Significant measures taken by his administration include the abolition of the monopoly of the East India Company and the abolition of slavery in the British colonies through the Slavery Abolition Act of August 28, 1833, which of course cost the country £ 20 million. For about two years after his resignation, Lord Gray occasionally visited the House of Lords; towards the end of 1836 he withdrew completely. He died on July 17, 1845.

Gray was married to Mary Ponsonby, a daughter of William Ponsonby, 1st Baron Ponsonby (1744-1806), with whom he had 11 sons and five daughters. He also had a number of affairs. With Georgiana Cavendish, Duchess of Devonshire , he had an illegitimate daughter, Eliza Courtney.

Grey's affair with Georgiana Cavendish was portrayed in the 2008 movie The Duchess .