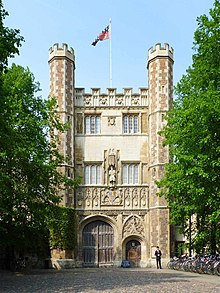 The Great Gate is the main entrance to the college and leads to the Great Court . A statue of the college's founder, Henry VIII (England) , stands in a niche above the entrance.

The Trinity College is a college of the University of Cambridge and is home to about 1,000  students and 160 teachers. It has a strong academic tradition and to date has produced 34  Nobel Prize winners and four Fields Medalists . Trinity is also known for the annual Mayball and its rowing club First and Third Trinity Boat Club, as well as its choir, The Choir of Trinity College, Cambridge .

The college was founded by Henry VIII in December 1546 shortly before his death. To this end, he united the two older colleges Michaelhouse and King's Hall and furnished the newly founded college with land and income that came largely from the confiscated monastery property.

The college's buildings stretch between Gonville and Caius College to the south and St John's College to the north, from Trinity Street west to the River Cam . Most of them date from the 16th and 17th centuries. The main entrance, the Great Gate, which was built at the beginning of the 16th century as the entrance to King's Hall, leads to the Great Court , the approximately rectangular inner courtyard, which is the largest in Cambridge with an area of ​​around 8,000 m². Its design goes back to Thomas Nevile , the master of the college from 1593 to 1615, who redesigned large parts of the college. He also had Nevile's Court built between the Great Court and the Cam, which was graduated to the west in the late 17th century with the construction of the Wren Library by Christopher Wren .

As of 2019, there are a total of 34 Nobel Prize winners who have studied, researched or taught at Trinity College. Of these, 13 received the Nobel Prize for physics , 9 for chemistry , 7 for physiology or medicine , 3 for economics and one each for literature or peace .

To date, four Trinity College members have been awarded the Fields Medal:

The head of Trinity College is the master . The first master was John Redman , he was appointed in 1546. Originally the office was bestowed by the king, sometimes as an award to important people. Today the college's fellows , supported by the government, elect the masters, the role of the royal family is only nominal.

The list of Masters at Trinity College includes (along with other personalities):