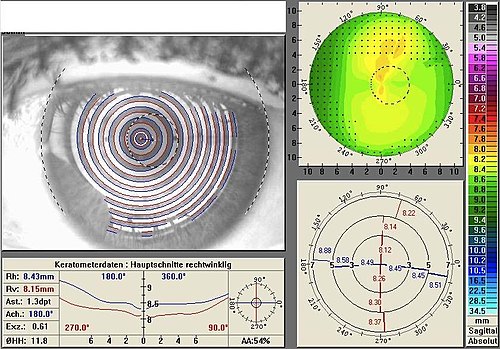 Astigmatism ( gr. Ἀ- a = not στίγμα stigma = point, so the Punktlosigkeit ), and astigmatism or astigmatism called, referred to in the ophthalmic optics a special refractive errors of the eye . Here emanating from an observed object light rays are not at a point on the retina level bundled, but in a focal line imaged, leading to the designation astigmatism led. A light beam that is incident on the eyeball parallel to the optical axis is refracted to different degrees depending on the plane of incidence formed with the optical axis . In contrast, the term spherical describes an optical arrangement whose refractive power is independent of the plane of incidence of the light beam (see also: aberrations / astigmatism ).

In the human eye , an astigmatism of up to 0.5 dioptres is considered normal and only represents the physiological deviation from an ideal shape (circle). It can be innate or develop over time, but in contrast to axial refractive errors such as short- or farsightedness less growth-related changes.

The intensity and severity of astigmatism in various ethnic groups is described as moderately to strongly penetrative. In families with severe astigmatism (e.g. Asians), inheritance dynamics according to the Mendel rule has been demonstrated. Affected families are recommended early For example, as early as the 6th month of life, a child's refractive power can be determined by means of skiascopy or laser diagnostics with the pupil dilated ( cycloplegia ) in order to avoid childish amblyopia / weak sightedness (ex ametropia or ex anisometropia ) through early eyeglass correction .

Various refractive media in the eyeball can be involved in the development of astigmatism. Usually this is the cornea , which is not exactly circular, but rather toric in shape due to a non-rotationally symmetrical curvature , which results in two meridians at right angles to one another with different refractive powers. Hence the colloquial term "astigmatism" comes from.

Corneal diseases such as the keratoconus and the keratoglobus often lead to severe and irregular astigmatisms and, in addition, to other imaging errors . Various ophthalmic surgical interventions such as glaucoma , cataract and squint operations can also lead to astigmatism. Astigmatism can also be hereditary.

Scheme Astigmatism inversus (astigmatism against the rule): The refractive power of this cylindrically deformed lens is stronger in the horizontal plane than in the vertical plane

An astigmatic dioptric apparatus of the eye creates a blurred image of the environment on the retina . While a focal point is generated in the spherical image of a point light source , two focal lines are created in the astigmatic image . One is at the focal distance of the main section with the maximum refractive power (see sketch T1 ), the other at the focal distance of the main section with the minimum refractive power ( S1 ). The axes of these two focal lines are usually perpendicular to one another. Between the two focal lines (T1 and S1) there is an area in which a point is shown as a fuzzy circle (see also: Astigmatism ). The closer the two focal lines are to one another, the smaller it is and the lower the extent of the astigmatism. This area is also known as the circle of smallest confusion . The astigmatic image can be sketched using a so-called Sturm conoid .

A reduction in visual acuity occurs in particular when the axis position of the cylinder is not exactly vertical (90 °) or horizontal (0 °), but in an inclined plane.

Astigmatism sun gear with 36 beams of the same type at a distance of 10 degrees.

An astigmatism is determined by means of objective refraction. An exact measurement of the corneal curvature and topography can also be done with an ophthalmometer or keratograph . The values ​​determined in this way are the basis for the so-called subjective refraction determination. With regard to the determination of an astigmatism, two steps are necessary for this: the strength adjustment and the axis adjustment of the cylinder. For both, if necessary using a special examination method , the cylinder fog method , a so-called cross cylinder is used , with which the extent of an astigmatism and its position can be precisely determined. A cross cylinder adjustment can also be carried out on a phoropter .

With the help of a suitable graphic, such as an astigmatism sun gear (see picture on the right) or a Snellen ray figure , which is used in the fine adjustment of cylinders, you can get a rough impression of your own astigmatism. To do this, one looks at the uniformly shaped graphic with one eye perpendicular to the image surface at various distances at which the image can be seen sharply, and subjectively assesses whether all rays have uniform line widths and distances. If astigmatism is present, the rays that are opposite in the corresponding direction will look different from the pairs of rays perpendicular to it. If the image or the head is rotated around the viewing axis, this direction is retained in relation to the eye and does not rotate with the image. 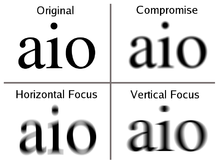 Blurred image due to astigmatism

Astigmatism is a refractive error in the eye and is generally not considered to be pathological. However, it then develops a certain disease value if it is more pronounced, which does not allow sufficient visual acuity even in a corrected state, it leads to asthenopic complaints, or if its causes are pathological in nature (lens opacities, keratoconus, corneal scars, etc.), and it is therefore an irregular expression. Congenital, higher-grade astigmatism can cause irreversible, functional visual impairment ( amblyopia ) in early childhood if this is not treated early.

A scientific study showed a significantly higher prevalence of astigmatism> 1.25 D at around 85% in people with congenital nystagmus than in normal people.

Regular astigmatisms can be compensated up to a certain strength with so-called cylindrical spectacle lenses , which have an astigmatic effect and initially often require a certain amount of getting used to. Since the correction of a combination of spherical and toric is glass, you call this also spherocylindrical toric lens . It has two main sections perpendicular to each other, the arithmetic mean of their refraction being referred to as the spherical equivalent . It is determined according to the formula:

This combination also allows the value of a cylinder to be represented both positively and negatively using a conversion formula. However, nothing changes in the refractive effect. The following glasses values, for example, have an identical effect: +1.00 −0.50 / 0 ° and +0.50 + 0.50 / 90 °. The reading for these two values ​​is:

Simple spherical, dimensionally stable contact lenses are suitable to a certain extent for correcting both regular and irregular corneal astigmatisms because a toric tear film is created between them and the corneal surface, which compensates for the astigmatism. Compensation can also be achieved with dimensionally stable or soft toric contact lenses, which maintain their alignment on the cornea through asymmetrical weight distribution. Finally, refractive surgery procedures can also be a way of correcting all forms of astigmatism.

There are rare cases in which an optical correction of the astigmatism cannot be satisfactorily achieved using sphero-toric spectacle lenses, toric contact lenses or an operation or leads to significant side effects. In such cases, a correction with the value of the spherical equivalent using appropriate spectacle lenses or contact lenses, which does not take astigmatism itself into account, is often the best compromise from a visual point of view.

With very few exceptions, statutory health insurances are not allowed to cover the costs of refractive interventions.

It has been propagated from the early 1920s to the present day that various forms of eye training or relaxation exercises could have a positive influence on the objective extent of astigmatism and, in some cases, would even eliminate it completely. To date, however, such statements have not been substantiated or even proven by scientific evidence of the effectiveness of such procedures. Serious work on this topic is not available even after decades. Such practices are therefore rejected by evidence-based medicine with regard to their supposed effect .

Some people with astigmatism squint their eyes and have better visual acuity. They make use of the principle of the Stenopean gap by creating a kind of pinhole which eliminates disruptive marginal rays and peripheral aberrations and thus contributes to a greater depth of field . As a rule, however, this leads to different symptoms ( asthenopia ) and is not a permanent substitute for an optical correction.

Astigmatism is derived from the ancient Greek word στίγμα stígma "point", "brand", which is preceded by an alpha privativum reversing the meaning , which corresponds to the prefix "un-" or the suffix "-los" in German . Astigmatism literally means pointlessness or lack of focus , in which there is no point-like image.