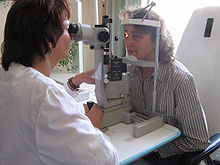 The ophthalmology and ophthalmology (including eye care , technical terminology also Ophthalmiatrie ; from Greek ὀφθαλμός ophthalmos, 'eye', also seeing ') is the study of the structure, function and the diseases and disorders of the visual system , its appendages and the sense of vision and their medical Treatment . It is one of the oldest medical sub-disciplines . Ophthalmologist (synonym: ophthalmologist ) is the (as an ophthalmologistfirst documented in 1401) Job title of the specialist who deals with ophthalmology. In the past, ophthalmologists were also called oculists .

The anatomical boundaries of ophthalmology are the eyelid and facial skin in front and the bones of the eye socket behind . With the examination options of the visual pathway and the visual cortex , they also extend to the back of the skull . There are close relationships with ear, nose and throat medicine , dermatology and neurology . Due to the frequent involvement of the eye in general diseases and the possibility of microscopic examinations of living tissue , ophthalmological findings are often used to make a diagnosis in internal medicine and neurology ( neuroophthalmology ).

Ophthalmology is one of the sub-disciplines of surgery , although there are numerous, effective and highly developed drugs and aids available to it. With the operation of the cataract (cataract), ophthalmology is the most frequently performed and, in total, the most expensive medical operation worldwide.

Schematic representation of the "Starstich" (1764) 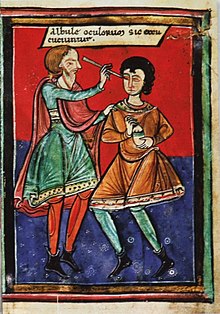 Eye surgery ( star stitch ) in the Middle Ages; the text says: "The whitish cloudiness of the eyes is removed in this way."

An ancient oriental , especially Babylonian and Mesopotamian ophthalmology is documented in Babylonian cuneiform texts . In the tablets of law of the Hammurabi over 3,600 years ago, regulations for eye operations were enacted: The Babylonian or Assyrian doctor should receive a reward of 10 shekels for a successful operation , whereas his hands should be chopped off if he failed (due to ophthalmological malpractice ).

From Egyptian medicine from 2500 to 500 BC BC, when there were already specialists for eye treatments, some papyri, such as the Ebers Papyrus or the Carlsberg Papyrus , are known with ophthalmological therapy instructions. Also around 280 BC From AD 200 to around AD 200, in Alexandria , the medical center of the Upper Egyptian, Greek, Indian and Near Eastern world at the time, collections of prescriptions for the treatment of the eye diseases common in Egypt were created. Around 500 BC The Indian doctor Sushruta also wrote ophthalmological texts.

In the works of ancient Greece (5th century before to 1st century AD) ascribed to Hippocrates , ophthalmology is not described in detail, but there are some references to ophthalmological therapies. Writings on the anatomy of the eyes were written by Alkmaion from Croton (around 500 BC), who was the first to describe the optic nerve , and Herophilos of Chalcedon (around 300 BC).

As the first optical correction, Pliny the Elder reported that Emperor Nero held a cut emerald in front of his eye because of his short-sightedness as a spectator at a fencing competition, although it remains unclear whether the emerald was more as an ornament or actually as an optical aid served and whether it was cut concave or convex. The treatment of eye diseases and injuries has been proven for ancient Rome. The then important Greek surgeon Antyllos is said to have operated on cataracts in Rome around 140 AD and performed surgical interventions to treat tear fistulas and roll-up eyelids . Around 40 AD, Aulus Cornelius Celsus described the typical coloration of the dermis of the eye in jaundice .

In the 9th century, Hunain ibn Ishāq (a Christian-Arabic doctor also called Johannitius ) created a ten-part work on ophthalmology, which was edited in Latin by Constantine of Africa in Salerno and became the basis of ophthalmology taught at Western universities as Liber de oculis Constantini Africani . Also in the 9th century Yuhanna ibn Masawaih is said to have written his ophthalmological treatise Kitāb Daġal al-ʿain ("The Defectiveness of the Eye").

Important medieval authors of further Arabic ophthalmological texts were Rhazes (9th / 10th century), who mentioned the pupillary reaction when exposed to light, and Jesu Haly (11th century) as the author of a three-part textbook on ophthalmology, as well as Avicenna in the 11th century and Averroes , the in the 12th century recognized that the light is absorbed by the retina, and the 13th century ophthalmologist and medical biographer Ibn Abī Uṣaibiʿa .

In the 12th century, a Jewish author named Benevenutus Grapheus who was active in Italy and Occitania ( Languedoc ), possibly from Jerusalem, wrote the ophthalmological text Practica oculorum , which appeared in several languages, initially in the Provencal dialect . Around 1250 the also widespread Liber de oculo was created by Petrus Hispanus , who later became Pope.

In the Middle Ages , ophthalmology was mostly practiced by surgeons , and since the Middle Ages, eye operations have been performed by specialized craft surgeons (known as star technicians or oculists), whose most famous doctor was Eisenbarth . The cloudy lens of the eye (" cataract ") was pressed into the eye using a special knife . The word "ophthalmologist" is first used in 1401 (as an ophthalmologist ).

The "Pommersfeldener Augenbüchlein" ( buchlin from the wetages of the eyes and penance dar mede ), which (as one of two to three authors, a master Johannes is named), is an important German-language work of ophthalmology in Silesia the authors Arnold von Villanova ( Libellus regiminis de confortatione visus ) and Jesus Haly ( Kitāb Taḍkirat al-kaḥḥalīn from “iesu uz Gelrelant geborn”) cited as well as the contemporary traveling ophthalmologist Pankraz Sommer, who traveled from Hirschberg to Silesia and Bohemia, and “quite a few Jewish ophthalmologists ”mentioned. The little eye book in a collective manuscript (from the Pommersfeld Palace Library ) is also linked to the announcement of the establishment of the traveling oculist and ophthalmologist Lorenz Thüring (or Doring) from Vienna, who was the personal physician of Emperor Sigismund and King Albrecht II .

After the Pommersfeldener Augenbüchlein from the first third of the 15th century and an anonymous booklet from 1538, an appendix to the Practica copiosa by the surgeon Caspar Stromayr published in 1559 and the teaching and manual eye service published by Georg Bartisch in 1583 are among the first more extensive German-language textbooks on ophthalmology . Bar table was also the first to surgically perform an enucleation of the eyeball. Ophthalmology was initially part of surgery and only emerged as an independent subject in the course of the 18th century, but especially in the 19th century, and the traveling oculists were finally ousted from the medical field from the 18th to the 19th centuries. Until the 18th century, the anatomy and function of the eye was unclear. From the 19th century onwards, with the advent of the microscope, details became known and systematically made usable for therapy. 1800 coined Carl Gustav Himly the name of Ophthalmology , the same year described Thomas Young the astigmatism .

The traditional star stitch for treating cataracts was replaced in the middle of the 18th century ( Jacques Daviel ) by removing the clouded lens from the eye.

The first private eye clinic in Germany was set up in Dresden in 1782 by the Saxon court oculist Giovanni Virgilio Casaamata (1741–1807) . Further clinics were opened in Erfurt and Budapest at the beginning of the 19th century . The first chair for ophthalmology occupied Georg Joseph Beer (1763-1821), who in 1818 had become professor for ophthalmology in Vienna . He had previously opened the first university clinic for eye patients there in 1813 .

The surgeon and ophthalmologist George James Guthrie (1785-1856) gave the first lectures on ophthalmology in Great Britain at the Royal Westminister Ophthalmic Hospital, which he founded in 1816 .

Groundbreaking inventions in the field of diagnostics were those of the ophthalmoscope by Hermann von Helmholtz (1821–1894) in 1851 and the perimeter by Richard Förster (1825–1902). Major advances were the surgical treatment of glaucoma by Albrecht von Graefe (1828–1870), who is considered the "father of ophthalmology", the introduction of anesthesia into ophthalmology by Henry W. Williams (Boston, 1850) and the first successful transplant of the cornea ( keratoplasty ) in 1905 by Eduard Zirm (1863–1944). The Copenhagen doctor and lecturer in microscopic anatomy, Adolf Hannover (1814–1894), who was awarded the Montyon Prize of the Paris Academy in 1856 and 1878, also contributed to the knowledge of the precise structure of the eye, its functions and its diseases in the mid-19th century. In 1928, the then fundamental monograph Syphilis und Auge by the Frankfurt , Istanbul (1933-1939) and Boston professor of ophthalmology Josef Igersheimer (1879-1965) appeared in its second edition (the important Ophthalmological Congress in Vienna in 1937 was organized by Igersheimer).

For cataract surgery, the Polish ophthalmologist T. Krawitz developed cryoextraction in 1961 , in which the eye lens, hardened by the cold, could be removed without bursting (intracapsular technique in which the lens capsule is also removed), which is then carried out by extracapsular extraction was replaced. In contrast to the intracapsular technique, this technique made it possible to preserve the lens capsule for placing the intraocular lens . The nucleus of the lens was initially delivered through a wide incision, and since the 1970s it has been smashed by ultrasound ( phacoemulsification ). This became the standard practice in the 1990s. The femtosecond laser-assisted surgical technique was added later.

Recently, electronically controlled laser systems have been increasingly used, for example in refractive surgery or in diagnostics of the retina and the optic nerve ( optical coherence tomography ). 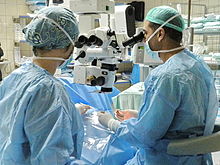 In order to be able to use the large number of expensive apparatus for examination economically, a number of ophthalmologists in Germany have come together to form a device association, so-called AugenDiagnostikCenter (ADC) . Such institutions are now represented at over 100 locations in Germany. Most of the ADC are organized in the Federal Association of Eye Diagnostic Centers.

In order to work as a " specialist in ophthalmology" after completing a medical degree in Germany , you need five years of advanced training in ophthalmology, two of which may be spent with a resident doctor. In order to be admitted to the specialist examination, an operation catalog and evidence of independently performed examinations are also required.

In Austria “specialists in ophthalmology and optometry” complete a six-year specialist training after their medical degree, one year of which in “counter subjects”.