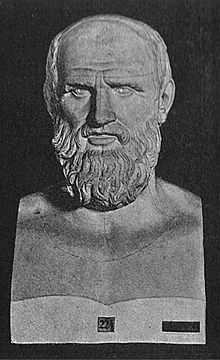 Hippocrates of Kos ( Greek Ἱπποκράτης ὁ Κῷος ; * around 460 BC on Kos , probably in Astypalaia / Kefalos ; † around 370 BC from Larisa , Thessaly ) was a Greek doctor and teacher. He is considered the most famous doctor of antiquity, whose school taught the theory of four body fluids in the concept of humoral pathology , and also as the "father of (modern) medicine", who placed medical action above the effectiveness of priestly words and subordinated it to a high ethical sense of responsibility.

Hippocrates was already highly venerated during his lifetime. He is regarded as the founder of medicine as a science, especially as an empirical science based on extensive observations and descriptions of disease symptoms.

Four biographical treatises of different time and quality, all of which were written centuries after his death, testify to the life of Hippocrates. The oldest surviving biography comes from the physician Soranos of Ephesus, who worked around 100 AD . According to express personal testimony, the Byzantine scholar Johannes Tzetzes , who wrote in the 12th century, depends on him , who also provides missing details in the Soranos Vita, which underlines its character as an extract. The Vita Bruxellensis of an anonymous author comes from around the 6th century, who reports on descent, life and teaching (Yppocratis genus, vita, dogma) and is also dependent on Soranos. The lemma Hippocrates of the Suda from the 10th century is a little independent, but complementary . Individual information can also be found in Galenus , Athenaios , Celsus and other authors.

Accordingly, Hippocrates came from one of the families of the Asclepiads , who traced themselves back to the god of healing Asclepius ; his parents were the doctor Herakleides and Phainarete (Φαιναρέτη).

As the son of a family of doctors, Hippocrates received his first instruction in medicine from his father. He received his further training from a Herodicus, according to Tzetzes and Suda from the speech artist and gymnastics teacher Herodicus of Selymbria (about 500-425 BC), who was born in Megara , but Herodicus of Knidos is also possible . In addition, he is said to have been instructed in philosophy by Democritus of Abdera (in Thrace ), in rhetoric by the philosopher Gorgias of Leontinoi ( Sicily ), which he can only have gotten to know during his extensive travels. Around 420 BC He left Kos and apparently traveled a lot as a traveling doctor through Greece and Asia Minor. Among other things, he stayed for three years on the island of Thasos, opposite Abdera . Ancient narrative tradition, handed down for the first time by Varro , brought him into connection with the prediction of an epidemic threat and its defense in Athens and other cities, which is particularly evident in the pseudepigraphic writing Decretum Atheniensium ( Δόγμα Ἀθηναίων ) by Hippocrates. With the plague of Thucydides in the years 430-426 BC The anecdote cannot be linked.

His sons Drakon and (probably in the service of the king of Macedonia) Thessalus as well as his pupil - according to Galenus at the same time his son-in-law - Polybos (named among others by Aristotle, who however does not establish any relation between Polybos and Hippocrates, Aristotle going back to Menon Excerpts from Anonymus Londiniensis from the 2nd century, Aëtios von Amida, who wrote in late antiquity, and the doctor of the church Clemens von Alexandria ) continued the family tradition. Hippocrates and his family were made the founders of a Koi medical school , even if it only appeared in the Hellenistic period. Nevertheless, the plane tree of Hippocrates in Kos City reminds of him .

Soranos narrates that Hippocrates died in Larisa at the age of 85, 90, 104 or 109 years around the same time as Democritus and was buried halfway between Larisa and Gyrton . The grave was still known in Soranos' time. In 1826 it was believed to have been rediscovered near the city of Thessaly , which is why a monument was erected there. But there is no evidence of the grave's identity.

The Corpus Hippocraticum consists of around 70 (at least 61) writings dating from the 5th century BC. BC to the 1st century AD and were written by many different people. None of the works (mostly created between about 430 and 350 BC) can be assigned with certainty to the historical doctor Hippocrates of Kos, but those who can be dated to his lifetime, the "authenticity" is possible and is still today often discussed as the "Hippocratic question". These include, in particular, Epidemics I and III , the Prognosticon and the treatises on sacred disease and on the environment . The surgical treatises De fracturis and De articulis are also considered to be works of the 5th century BC. Chr.

The texts of the Corpus Hippocraticum , kept entirely in the Ionian dialect - as Koer, the native language of Hippocrates was Doric Greek - deal with a medicine based on rational observation of nature. The addressees are partly doctors and partly medical laypeople. For example, some documents give therapy instructions in a concise, listing form, others contain records of medical histories that are intended to help the doctor with diagnosis and prognosis; some of them have an educational or polemical character.

Many of the scriptures explain the development of diseases from the imbalance of body fluids (blood, mucus, yellow and black bile) and as shifts in the states of tension in the tissues. As therapeutic measures, lifestyle changes, diet, exercise therapy were prescribed, drugs were given and surgical intervention was carried out. Following the Hippocratic doctrine of the juices, harmful procedures were also carried out to remove excess juices , such as bloodletting , cupping and the administration of laxatives . 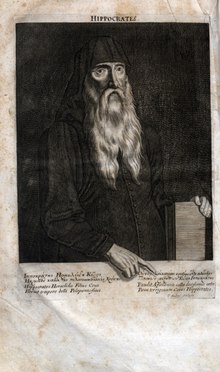 Even to his contemporaries and people close to him, Hippocrates was considered a great doctor, even if the evidence is sparse. Aristotle mentions him in his politics when explaining the word "large" ( μέγας ), as he would like it to be understood in the context of the text. So Hippocrates could be called “bigger” - not as a person, but as a doctor - than any other person, even if he was physically larger. Nevertheless, he does not mention Hippocrates again, not even in places where he draws from the writings of the Corpus Hippocraticum . According to Galen , there was an Aristotelian interpretation of the Hippocratic treatises on nature. Traces of it have not been preserved. Plato, the younger contemporary of Hippocrates, mentions him twice in the dialogues Phaedrus and Protagoras . In Protagoras , the interlocutor Socrates puts the doctor from Kos in a row with the artists and sculptors Phidias and Polyklet : all three men, with whom one could have learned a decent profession for his apprenticeship money - in contrast to an apprenticeship with the sophist Protagoras from Abdera . In addition to this rather casual mention of Hippocrates, he is cited in Phaedrus as a representative of a holistic approach. When discussing the question of whether a rhetorician needs to know the “nature of the whole”, reference is made to Hippocrates, who required this knowledge for his discipline.

Since the 3rd century BC Glosses and commentaries on Hippocrates are attested. The Greek doctor Galen, who worked in Rome, further developed the four-humus theory and founded a theory of temperament on its basis . He also saw, as in some Hippocratic writings, a connection between body structure and character, which was incorporated into a later type theory . In the 2nd century there was a "Hippocrates renaissance" to which Galen made a decisive contribution. Koi bronze coins from the early Roman Empire carry Hippocrates' image.

The fact that the pathological ideas of the hippocratics only have historical value today does not diminish the recognition of the medical school of Kos by its current colleagues. Hippocrates demanded physical and mental hygiene , personal integrity , caution, empathy and analytical thinking from the doctor . The Hippocratic doctrine that a doctor has to rely on careful observation, questioning and examination and to work out his diagnosis and therapy systematically is recognized by modern medicine as well as the consideration of the anamnesis (prehistory), the living conditions and the psychological ones, which he demands Situation of the patient.

The characteristic facial expression called the hippocratica facies in dying or critically ill patients was already described in detail by Hippocrates. The Hippocratic Oath is the first known moral constitution of the medical profession. The oldest known source, however, comes from post-Christian times, the authorship, probably an author from Hippocrates' circle of students, has not been clarified. Its role model function for doctors was expressed in terms such as “the English Hippocrates” for Thomas Sydenham (1624–1689) or “the French Hippocrates” for Philippe Hecquet (1661–1737).

In 1703, Charles Plumier named a genus of the spindle tree family (Celastraceae) as Coa , in honor of Hippocrates of Kos . Carl von Linné changed this name to Hippocratea in 1737 . Furthermore, the Hippocrates glacier on the Brabant Island in the Antarctic Palmer Archipelago has been named after him since 1960 and the crater of the moon Hippocrates since 1970.