Marcus Terentius Varro (* 116 BC in Reate in the Sabinerland , today Rieti ; † 27 BC ) was the most important Roman polyhistor . To distinguish it from the poet Publius Terentius Varro , he is often referred to as "Reatinus" according to his origin. His extraordinarily extensive work was a treasure trove of cultural-historical knowledge for the following generations and had a formative effect on the culture of the Augustan era in particular . Varro was still an important authority in late antiquity ; and Fathers read and quoted his works. Today only a small fraction of his writings have survived.

Varro's parents are unknown; he probably came from a knightly family. His ancestor was probably the consul Gaius Terentius Varro . Reate is only expressly attested as his hometown in a letter from the late antique scholar and politician Quintus Aurelius Symmachus . Augustine erroneously states Rome as the city of birth and residence in childhood. From Varros' writings it can be seen that he had a close relationship with Reate, which he often mentions and where he owned an estate, and with the Sabine country; therefore its origin there is plausible.

Varro studied in Rome and Athens . His teachers included the grammarian and literary historian Lucius Aelius Stilo , with whom Cicero also studied, and the Platonist Antiochus of Askalon , whose classes Varro probably attended around 84/82 in Athens. He was a close friend of Cicero; he was probably a relative of his wife Terentia .

Varro began his civil service career at an early age. He was triumvir capitalis in the second half of the nineties, and quaestor in 86 at the earliest . He held the tribunate (70 at the earliest), the curular aedility and (probably 68) the praetur . In 67 he was the legate of his friend Pompey in the pirate war, for which he was awarded the Corona navalis . In the same position he commanded 49 in Spain , but had to surrender after the surrender of Ilerda Caesar . Although he then rejoined Pompey, he was pardoned by Caesar after the battle of Pharsalus and returned to Rome in 46. There Caesar commissioned him to build a public library, but this project fell victim to the turmoil after Caesar's death. After Caesar's murder, Varro 43 was ostracized by Mark Antony and only barely escaped death. Pardoned by Octavian , Varro lived - until his end in the year 27 literary - on his estate in the Sabine mountains.

Pliny the Elder reports that, at his request, Varro was buried in a clay coffin, “according to the Pythagorean custom”, bedded on leaves of myrtle , olive and black poplar trees. This testamentary decree of Varros shows his close relationship with Roman New Pythagoreanism, which is also evident from a number of utterances in his works.

In contrast to Cato , who is a hundred years older , Varro treats the subject in a more theoretical way: the landlord no longer cultivates his land himself, but rather controls his administrator. Among other things, Varro precisely calculates the labor force of the necessary slaves . He recommends building country houses away from swamps, in which animalia quaedam minuta, quae non possunt oculis consequi (= small animals that cannot be seen with the eyes ) live, which can cause serious diseases when taken in through the mouth and nose.

The calculation of the year of the (legendary) foundation of the city of Rome, the natalis urbis ( birthday of the city of Rome ), comes from Varro . This year refers to the year with the formula ab urbe condita (called "varronic" count). Like many of his contemporaries, Varro assumed that the time of the conquest of Troy by the Greeks had been determined by speculation , which, according to our count, dates back to 1193 BC. BC falls. According to his own statements, he achieved the year the city was founded by introducing a symbolic number: 440 years were considered to be the distance between death and rebirth of an individual in the transmigration of souls . To do this, he relied on astrologers who prepared natal charts. He applied this assumption to cities. Since, according to the Aeneas myth, he saw Rome as the rebirth of the heroic Troy, he calculated the year 753 for the foundation before the beginning of the current calendar. However, the year counting with the reference point of the city's foundation only began to establish itself in late antiquity . Even during the imperial era, the years after the consuls were still counted. In addition, Varro's calculation was controversial, as Cicero noted.

In his work De civitate Dei (On the State of God), the church father Augustine used Varros Antiquitates rerum humanarum et divinarum so often that they could be partially reconstructed from his quotations by modern philology. In these quotes from Varro's work there is also the oldest documented evidence for the term “ natural theology ”. It cannot be said whether he was the first to use the term theologia naturalis . But thanks to the tradition through Augustine, the term has become historically powerful.

Varro relies on stoic sources. He differentiates between the mythical theology created by poets ( genus mythicon ), the theology of the philosophers ( genus physicon ) and the conception of the gods, which is assumed in the context of the state religion ( genus civile ). Varro rejects the poets' fables; he thinks that only the foolish people cling to them. In spite of his disapproval of the philosophical differences of opinion about the nature of the gods, he considers philosophical theology valuable. He advocates the practice of the traditional state religion and believes that it is appropriate to the needs of the people, while much in philosophical theology goes beyond the grasp of the people. In his view, the originally pure worship of the Roman religion was tainted by the influence of poets. With this, Varro places himself in the tradition of the criticism of the poets' dealings with religion that has been common since Plato . Varro emphasizes the legendary, highly revered King of Peace Numa Pompilius as a model of ancient Roman piety . Numa's name was associated in Rome with Pythagoreanism, which Varro held in high esteem, even if educated people like Cicero and Livy pointed out that Numa could not have been a pupil of Pythagoras, as the legend claimed. Varro puts Numa chronologically correct before Pythagoras. 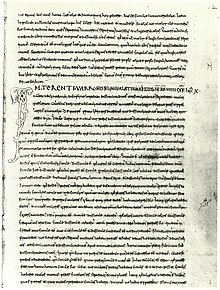 Varro's scholarship spanned a wide variety of fields, and no other Roman could match his productivity. Quintilian called him "the most learned of all Romans". The total number of his works - mostly treatises and dialogues, but also poems - was over 70 in more than 600 "books" (breakdown units). Only the textbook on agriculture in three books ( Rerum rusticarum libri tres ) , written at the age of 80, has been completely preserved . This work was intended to serve as a guide for his wife Fundania, who had bought a villa rustica .

Most of the 25 books in De lingua Latina (On the Latin Language) have been lost; Only books 5–10 (incomplete) and some fragments from the lost books have survived. Almost 600 fragments of the 150 books by Menippi Satires have survived .

The remainder of the work is only known from quotations in the writings of other ancient authors and from a list of works from late ancient times. These include:

The genus Varroa Oudemans , 1904 with the varroa mite , which causes the bee disease varroosis, is named after Marcus Terentius Varro. The plant genus Varronia P.Browne from the family of Borage Family (Boraginaceae) is named after him.