Praetur is a redirect to this article. For the historical office in Hamburg, see Prätur (Hamburg) .

The praetur ( Latin praetura ; also Germanized praetur ) was one of the higher offices of the Roman official career, the cursus honorum (usually the third office after the bursary and aedility ). The incumbents were called praetores (Germanized: praetors, singular: praetor ). They were elected for one year by the people in the comitia centuriata .

The noun praetor (early form praitor , from praeitor ) is derived from the Latin verb prae-ire ("to go ahead") and actually designates someone who goes ahead, i.e. a leader or a superior. In civil status, the praetor designates a mayor (for example in Capua ), the sufet in Carthage, or the chief judge in Rome.

The history of the early republic is largely in the dark, as Roman historiography did not write until around 200 BC. And little is known about the early days. Therefore, almost no point in historical research is undisputed.

The late Roman tradition (especially Titus Livius ), which the older research followed for a long time, reports: After the last king, Tarquinius Superbus , had been driven out, the royal power, which he had held for life, was now carried out annually by the patrician heads in turn ( Annuity principle ). But today it is considered unlikely that even then, 509 BC BC, the first two consuls officiated, as the Romans later believed.

The new bearer of the old royal power was probably called praetor maximus . A colleague and thus the principle of collegiality should not have existed at first. The praetor maximus remained the highest official of the early republic until he was appointed in the middle of the 5th century BC. Was ousted by the consuls as the highest officials. The exact details are, like much in the history of the early Roman Republic, controversial due to the uncertain sources of research. Jochen Bleicken assumed that the consuls should initially only have supported the praetor. However, since this was particularly stressed by the administration of justice, the consuls took on more and more tasks and the praetur finally surpassed the importance.

The fact that the office originally belonged to the highest college was shown by the fact that the praetor owned the imperium until the end of the republic, i.e. could be a military leader. This was also the reason why the praetors, like the consuls , were elected by the committee of the centurions , who represented the Roman people in arms. It is also significant that the first provinces, which started in the middle of the 3rd century BC, Were built in the course of Roman expansion and their administration included military operations, officials were subordinate, who also carried the title praetor and were elected by the comitia centuriata .

With the implementation of the leges Liciniae Sextiae in 367 BC There was an annually newly elected praetor urbanus (from urbs , "city", meaning Rome), who was responsible for the jurisdiction in the city of Rome. He was only allowed to deal with public cases on behalf of the people (lege populi) . He made a preliminary investigation of the case and handed everything else (cognitio) to the jury (iudices selecti) until the matter was ruled out, whereupon he judged it (ius dicere or iurisdictio). 242 BC The praetor peregrinus ("foreign praetor "; peregrinus : "foreigner" or "non-citizen") was added, who was active in legal disputes between Roman citizens and non-citizens.

The governors of the provinces also belonged to the college of praetors, although they were completely different from the court praetors because of their completely different area of ​​responsibility and spatial separation. The first governors (provincial praetors) were 227 BC. For the first two Roman provinces of Sicily and Sardinia , which were conquered during and after the first Punic War . 197 BC Two more were added for the two Spanish provinces Hispania citerior and Hispania ulterior .

The provincial praetor had the highest military and judicial power in the province , represented the Roman rulers in full and was not restricted by anything. Until Sulla , the number of praetors (two court praetors, four provincial praetors) remained the same despite the increasing number of provinces. Sulla increased the number of praetors, probably in 81 BC. BC, to eight and limited their jurisdiction to the judiciary in Rome, which also included the management of the permanent courts of justice (quaestiones perpetuae) . After the praetor one could hold a governorship as a propaetor. 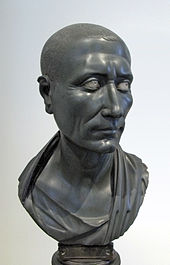 The later consul and dictator Gaius Iulius Caesar (here a bust, the so-called Green Caesar , from the 1st century AD) was created for the year 62 BC. Elected praetor. As a propaetor he served in Hispania Ulterior .

In the senatorial office career, the praetur usually followed the tribunate or the office of aedile and was held before the consulate. Since 180 BC A minimum age of 40 years was required. As mentioned, praetors belonged to the magistrates who, like the consuls , owned an empire , i.e. were allowed to command an army.

Particularly in exceptional situations, praetors were given military command in a province, for which authority could be extended beyond the normal year for longer periods. The magistrates then held the title pro praetore ; the differentiation from the title pro consule is not always clear. Former praetors were referred to as praetorii (" Praetorians "). In the Senate they formed a rank below the former consuls (consulares) .

The praetors were the deputies of the consuls and in particular responsible for the interpretation of the law and the administration of justice in general. From 367 B.C. They replaced the consuls as court lords from a judicial point of view. They played an important role in the development of Roman law , as they laid down the applicable procedural rules in the praetoric edict . The praetor's decorations were similar to those of the consuls: he was accompanied by two lictors in town and six outside of town . He wore the toga praetexta , had a scaffolding (tribunal) as a special place of jurisdiction , where he sat on the sella curulis , and next to it the judges on armchairs (subsellia) . In the meantime, he decided insignificant cases without any formalities in any place (ex aequo loco).

During the imperial era , the office continued to exist as part of the senatorial career, but could be held at an ever younger age - most recently at the age of 17. Under Augustus , they were in fact withdrawn from military command. Since 14 AD, praetors and consuls were no longer elected by the people, but determined by the senate. As a result of the increased award of suffect consulates , far more praetors than before were given the opportunity to hold the consulate. Emperor Hadrian had the praetoric edict finalized in the edictum perpetuum around AD 128 , but the praetors had already lost importance due to the expansion of the imperial jurisdiction. Her business area was now limited to smaller items such as the cura ludorum ( worrying about the games) and the handling of everyday legal transactions.

In late antiquity , the praetur was increasingly perceived as a burden due to the obligation to host expensive games at one's own expense; the praetors were now compulsorily appointed by the senate and the emperor, and they no longer existed only in Rome but also in Constantinople . Diocletian had also abolished the coexistence of the iura honorarium and gentium , along with the still valid ius civile , so that the once important judicial powers of the praetors ceased to exist ( Codex Gregorianus ). Since 372, the law required that the praetors be set ten years in advance so that their families had enough time to raise the necessary money for the celebrations. Quintus Aurelius Symmachus, for example, cost his son's praetur in 401 the extremely high sum of 2000 pounds of gold. The office is last mentioned in the middle of the 6th century under Emperor Justinian .