Index omnium legum et paragraphorum quae in Pandectis, Codice et Instit [utionibus] continentur, per literas digestus.
("List of all legal texts and paragraphs contained in the Pandects, in the Codex and in the institutions [= textbook], in alphabetical order".)
Lyon 1571.

The Pandekten (from Greek : pandektes , "Encompassing"), even Digest (from Latin : digesta , "Parent"), are commissioned by the Eastern Roman Emperor Justinian compiled late antiquity compilation of jurisprudence of the scholars of the classical Roman Empire . Each of the individual legal writings names its source in an inscription . These were used for advanced legal lessons after the institutions had been completed as a beginner's textbook.

The Pandects were part of the legal body of justice, the Corpus iuris , which has been called the Corpus iuris civilis since the time of humanism . Together with the Codex Iustinianus , they are the most important source of text for Roman law . Justinian had all the classic legal texts collected beforehand and, after selection, adopted and interpolated . Then he endowed them with the force of law. Dogmatic questions and the incompleteness of the texts, due to the selection, were deliberately set aside in favor of isagogical purposes.

Pandect science was developed in Germany in the 19th century . The breakdown of legal subjects was done - following the system of pandects - in the differentiation of the books according to obligations (obligations), property, family and inheritance law. This methodical approach was the basis for the development and elaboration of the German Civil Code .

In December 530, at the instigation of Emperor Justinian, a digestion commission was set up by the Deo auctore constitution . The Quaestor sacri palatii (Minister of Justice) Tribonianus presided over the entire Justinian legislature . He was supported in his work by imperial administrators, lawyers for the capital's courts and Roman-Greek law teachers ( antecessores ) who taught at the law schools of Beirut ( Berytos ) and Constantinople , Dorotheos and Theophilos. For compilation they chose legal writings from the 1st century BC. From BC to the 3rd century AD, in terms of volume this was 2000 works (2000 libri ), which had to be compressed. Inscriptions were made to indicate the origin. The works, placed in a new context, ultimately yielded 50 books.

At the end of 533 the digests could be promulgated in Constantinople . They are written in Latin , which was still the legal and administrative language even in the predominantly Greek east of the divided empire . Bluhm's mass theory offers an attempt to explain how they came about and how Justinian's lawyers worked . The predigest theory pursues other approaches, assuming that there were private forerunner collections.

The 50 books of the Digest are divided into titles ( tituli ). Each title deals with a topic. For example, the first title of the 41st book deals with the acquisition of property ( De adquirendo rerum dominio ), the first title of the 17th book with the commission ([ De actione ] Mandati vel contra ). The titles are divided into fragments, also called leges . Since some of these are very long, they were divided into sections in the Middle Ages. The entry section of a lex is referred to as principium (Latin for "beginning") and pr. abbreviated, only the following section is paragraph 1 (§ 1).

Nowadays, digests are usually quoted with four numbers (in the Middle Ages they were quoted quite differently). The first number designates the book, the second the title, the third the lex and the fourth the paragraph. "D. 17,1,26,3 “means paragraph 3 of lex 26 in the 1st title of the 17th book of the Digest. The initial passage of a lex , followed by paragraph 1, is still with pr. (for principium ) given, for example: D. 47,2,67 pr. 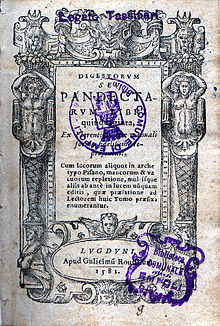 The Digest contains, together with the Codex Iustinianus and the Institutiones , the entire private law and those parts of the criminal law , which from 533 in the Roman Empire, i. H. before Justinian's conquests, initially only in fact in the east . The work was completed by the Novellae , which - since it was not officially compiled - probably appeared for the first time in the legal works of the Authenticum and the Epitome Iuliani .

Justinian was keen that the applicable law of the 6th century should essentially coincide with classical law , as it had developed especially up to the 3rd century. Attempts were made to achieve this goal by collecting the writings of older Roman lawyers in the digests and arranging them according to content. They used excerpts from writings of different characters and from lawyers who had lived at different times. The lex 1 of the title 17.1 Mandati vel contra comes from the lawyer Paulus , who lived at the beginning of the 3rd century; the lex 2 comes from the lawyer Gaius , who worked in the middle of the 2nd century; the lex 6 comes from Ulpian , a contemporary of Paul; the lex 30 about comes from Julian , who was consul in the year 148.

With this approach, the content of the extracts had to be changed in part. Repetitions and contradictions in the writings, whose authors had copied from one another as often as they had generated disputes, were to be deleted. And of course the law of the 1st century BC could In spite of all classicistic tendencies, not simply valid in the 6th century AD; So it was necessary to make appropriate adjustments: The deletion of the mancipatio and the fiduzia , each replaced by the traditio and pignus, were important .

A fragment of Julian's, as we find it in the Digest, does not necessarily contain the text that Julian wrote in the 2nd century AD. If you don't want to know what should be considered law based on the digests in late antiquity, but ask what Julian himself wrote or which law was valid in Rome in the 2nd century, you are faced with the problem of which deliberate text changes Justinian's lawyers have made on Julian's original text. Such deliberate text changes are called interpolations . Obtaining Julian's text becomes even more complicated if, moreover, the assumption is dropped that Justinian's lawyer actually had the original of Julian's text after 400 years and after multiple copying and commenting on the text.

The digests have come down to us today primarily through the magnificent Florentine manuscript of the Littera Florentina , which is considered one of the first of the copies of the Byzantine original of the digests to be sent throughout the empire. In contrast to the other extant Digest manuscripts, which date from the High Middle Ages , it dates from the 6th century. In the High Middle Ages they were rediscovered together with the Codex Iustinianus in Italy and had a considerable impact.

The rediscovery of the digests in the 12th century led to efforts across Europe to put the law in force in writing.

From the 17th century onwards, the until then largely undisputed validity of the Pandects was increasingly discussed by a number of scholars.

In the 19th century, the content of the pandects themselves was researched more closely. In doing so, the connection between Pandects and natural law was abandoned and a high level of abstraction was achieved in jurisprudence. The General Civil Code ( ABGB ) with the institutional systematic approach and the BGB (pandectistic approach) are among other things the result of pandect science of this time.