The title of this article is ambiguous. Further meanings are listed under Aeneas (disambiguation) . 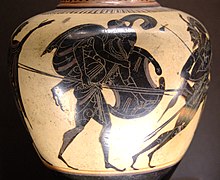 Aeneas ( ancient Greek Αἰνείας , Latinized Aeneas ; German and Aeneas ) is a person of both the Greek and the Roman mythology . He comes from a branch of the Trojan ruling dynasty and is the son of Anchises with the goddess Aphrodite (Roman Venus ). Aeneas is considered to be the progenitor of the Romans.

In Homer's Iliad , Aeneas is a Trojan prince from a branch line of the ruling house and leader of the Dardans (allies of the Trojans). He is considered the bravest of the Trojans after Hector . During the Trojan War he is badly wounded in a fight with Diomedes ; he would have died had his mother Aphrodite not carried him away, with the angry Diomedes wounding the goddess on the wrist. Apollo wrapped the two in a protective fog and transferred the injured Aeneas from the battle to the citadel of Pergamon , to his temple there. In the sanctuary, Leto and Artemis healed him and made him stronger than before. 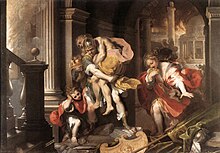 Mythological stories based on Homer tell of the rescue of Aeneas from sinking Troy and his journey to the west. Together with his father Anchises, whom he carries on his shoulders, and his son Askanios ( Latinized Ascanius ), also called Iulus , he is able to escape from the burning Troy . He can also take the Palladion with him, but he loses his wife Krëusa . While fleeing Troy, Aeneas gathers a group of escaped Trojans around him. According to legend, the journeys of Aeneas from Troy finally led to the founding of the city of Alba Longa , from which Rome would one day emerge.

The Aeneas legend finds its most detailed description in the Aeneid by the Roman poet Virgil . It tells how the Trojans (Dardanians) first set out on a journey on fast ships to Samothrace , but - deterred by a dreadful omen from this place - strive for other countries and islands. Persecuted by the goddess Hera , they go on a long odyssey, including to North Africa, and visit the newly founded Carthage , where Aeneas meets his queen Dido , who falls in love with him and commits suicide after separating from him .

Finally, through an oracle, Apollo orders them to visit the “old mother” who turns out to be Italy personified . In the sixth book of the Aeneid , Virgil describes how Aeneas travels to Hades to have his father Anchises prophesy the rule of his family in Italy up to Augustus' Roman empire. There he also meets Dido again, who silently turns away after his address, and thanks to a magical mistletoe he can return to the world of the living.

Aeneas is welcomed by Latinus , King of Latium , and woos his daughter Lavinia . After he prevailed in a duel against his rival and previous groom of Lavinia, Turnus , he married her and founded the town of Lavinium in her honor . She gives him another son: Silvius . Later he takes in Dido's younger sister, Anna Perenna , who takes her own life when she realizes Lavinia’s jealousy.

In a fight, Aeneas (like Heracles ) is said to have been transferred to heaven ( Olympus ). Eventually he was declared a god ( Iupiter Indiges ).

According to legend, Aeneas' son Iulus later founded Alba Longa , the "mother city" of Rome. The Julians , especially under Gaius Julius Caesar and his adopted son Octavian , refer to him and the mythological descent from the goddess of love . In the portrayal of Virgil ( Aeneid 6, 763), Silvius is the successor of his brother in Alba. All the kings of Alba who succeeded Silvius carried his name as cognomen (e.g. Numitor Silvius ). The twin brothers Romulus and Remus , the founders of Rome , came from Ascanius 'or Silvius' family - via Aeneas Silvius, who could also be Silvius himself, and Latinus Silvius . Through them Aeneas was considered the ancestor of the Roman people.

To be able to derive one's own descent from Rome - and thus also Troy - was already popular in antiquity, but also throughout the entire Middle Ages. Brutus of Britain , for example , the founding king of Britain, was regarded as the son of Silvius.

It is based on the list of the kings of Alba Longa in Livy . (However, with Livius Silvius, the father of Aeneas Silvius, the son of Ascanius.)