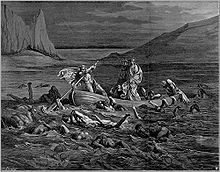 Drive over the Styx (etching by Gustave Doré from 1861)

With the help of the ferryman Charon , the reception of the funeral rites and a coin , the so-called obolus under the tongue, the river Styx or Acheron , which separates the upper world from the underworld, can be crossed. Other rivers that surround the realm of the dead are the Kokytos , Pyriphlegethon , the Lethestrom and the Acherusian Lake formed by the Acheron . Should the deceased not be able to pay the obolus, their souls would flutter around the banks of the river for a hundred years until Charon allowed them to cross.

A chasm or cave forms the entrance to the realm of the dead. It is either at the end of the world on the banks of the Ocean , at Cape Tenaro , in the land of the Cimmerians or in the Persephones grove. There the black tides of the flaming river Pyriphlegethon and Cocytos plunge into the depths. Kerberos , the three-headed, snake-haired hellhound, guards the entrance to Hades and ensures that no living person enters the underworld and no dead person leaves it.

Judgment of the Dead, Elysion and Tartarus

According to the original Greek view, Hades was determined equally for all mortals: high or low, good or bad. They didn't live on there, only existed as shy shadows. Only a very few, chosen people were spared Hades - they were deified and joined with the gods on Olympus . An example of this is Heracles .

According to later presentations, the judges of the dead Minos , Rhadamanthys and Aiakos decided the fate of the soul after death, on the meadow in Hades overgrown with asphodelos . Most of the souls entered the Elysian realms surrounded by the Lethe (stream of oblivion), where they either stayed as a shadow painlessly, but also joylessly on the Asphodelos meadow ( ἀσφοδελὸς λειμών asphodelós leimṓn ) or existed in eternal bliss in the Elysion . According to another, at least as old conception, the Elysion was far beyond the Ocean, on the islands of the blessed.

But the wicked were pushed into the Tartaros , the deepest region and inhabited by eerie figures. Those who had committed grave wrongdoing against the gods were to suffer eternal torment here. The area is surrounded by a bronze wall and the river of flames Pyriphlegethon and serves as a prison for Zeus for wrongdoers and godless people. These inhabitants of the Greek "hell" include: 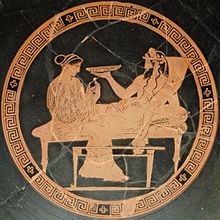 With Zeus' consent, Hades stole the young Persephone and made her his wife. Her mother Demeter was so saddened by this that she forgot to grow the grain. Zeus first tried to free Persephone; since she had already tasted the fruits that prevent a return from the underworld, she had to stay in the underworld. So the agreement was made that Persephone was allowed to spend six months of the year on earth and the remaining six months with Hades in the underworld.

Orpheus , the famous singer, went down to Hades to free his beloved late wife Eurydice . With his singing he was able to convince Charon, the ferryman on the Styx, to take him with him into the underworld. There he met Eurydike's shadow of the soul and asked the god Hades to be allowed to take her back to the upper world. Orpheus was allowed, but on the condition of Persephone that he go before Eurydice and under no circumstances should he look around for her until they had returned to the upper world. Orpheus tried to make the ascent as quickly as possible, but he began to fear that Eurydice might not be able to keep up. He quarreled with himself and looked around. Eurydice was behind him in shadow. She had to leave him immediately and return to the underworld for good. According to another idea, supported by ancient sculptures, Eurydice touched Orpheus, so that he looked around in shock.

Hades held Theseus and Peirithoos prisoner, who had sworn to marry daughters of Zeus. Theseus chose Helena and together they kidnapped the girl and decided to hold her until she was of marriageable age. Peirithoos had decided to steal Persephone from the underworld. They left Helena with Theseus' mother Aithra and Peirithoos, accompanied by Theseus, descended to the underworld. Hades faked them hospitality and a feast - but as soon as the tired ones sat down, snakes wrapped around their feet and held them captive. Because of this cheeky undertaking, the god of the underworld tied her to a stone.

In order to get the hellhound Kerberos out of the underworld as the last of the twelve works for Eurystheus , Heracles was initiated into the mysteries of Eleusis , a Demeter cult, by the priest Eumolpos . After making sacrifices and atoning for the killings of the centaurs, he began the descent into Hades in the Taenarian foothills. Even in the underworld, the dead souls fled from the hero, who struck the Medusa and Meleager with his club until Hermes informed him that he was only practicing shadow fighting. Athena and Hermes helped him back and forth through Hades.

“Coming very close to the gates of Hades, he saw his friends Theseus and Peirithoos ...
When they both saw the friendly demigod, they stretched out their hands imploringly ...
Heracles really took Theseus by the hand, freed him of his gangs ...
A second attempt to free Peirithoos also failed, for the earth began to shake under his feet ...
King Pluton stood at the gate of the city of the dead and denied him entry. But the hero’s arrow shot pierced the god in the shoulder, so that he felt the torments of mortals and, when the demigod now modestly asked for the hellhound to be kidnapped, he no longer resisted. But he demanded as a condition that Heracles should be able to rule it without using the weapons he was carrying "

Hades had to watch as Heracles slaughtered one of his cows and breathed new strength into the soul of Theseus with the blood. Theseus then escaped from the underworld. Heracles also brought Alcestis , the wife of King Admetus , back from Hades. Heracles almost strangled a helpful servant of Hades, the shepherd Menoites , if Persephone had not appeased the demigod before he left with Kerberus through the cave of Acherusia and the last of his duties had been completed.

The so-called chthonic gods , demons and monsters were not necessarily thought of as part of an afterlife inhabited by souls, but as inhabitants of an underworld in the sense of an underground world :