The title of this article is ambiguous. Further meanings are listed under Minos (disambiguation) . 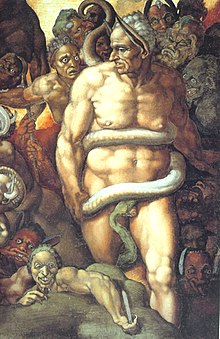 Minos, entwined and bitten by snakes (detail of a fresco of the Last Judgment in the Sistine Chapel - Michelangelo , 1536–41)

Minos ( Greek  Μίνως ) is in Greek mythology the son of Zeus and Europa - and the brother of Rhadamanthys and Sarpedon . He was a king of Crete , consort of the Pasiphaë .

According to Diodorus (4,60,3) there were two kings named Minos, grandfather and grandson. While the grandfather was the brother of Rhadamanthys and Sarpedon, the grandson took Pasiphaë as wife. According to the Parian Chronicle , the first Cretan king Minos lived in the second half of the 15th century BC. BC , a second king Minos came in the first half of the 13th century BC. In conflict with Athens. According to Homer , he was the grandfather of Idomeneus , who was involved in the Trojan War , the son of Deucalion .

Herodotus describes Minos as the builder of the first thalassocracy , which successfully fought piracy in the eastern Mediterranean and was the source of Cretan wealth ( see also maritime domination ). According to Thucydides , Minos is said to have expelled the Carians from the Cyclades and ruled large parts of the Aegean Sea .

As to whether Crete was really a thalassocracy during the Minoan period, there is no consensus in research up to now.

The nymph Britomartis was a daughter of Zeus and therefore half-sister of Minos. He fell in love with her and chased the wild girl through the mountains of Crete for nine months. When he was almost able to take hold of her on a steep cliff in the Dikte Mountains, her dress caught on a myrtle branch; she saved herself by jumping into the sea and landed in the nets of fishermen who brought her to safety. Artemis later elevated her to the rank of goddess.

To ensure the marital fidelity of her husband, Pasiphaë cast a spell on the king: when he hugged, snakes, scorpions and millipedes streamed from his body. Then Prokris arrived on the island, which was just in dispute with Cephalus . She healed Minos from his suffering. In return he gave her an infallible spear and the fast, immortal dog Lailaps - gifts that his father Zeus had given to Europa .

Another version only said that Prokris was the only one who could associate with Minos with impunity, because she had previously armed herself with the essence of a medicinal plant.

Minos and the bull

According to one story, he and his brothers were adopted by Asterios , the king of Crete. The three of them quarreled over who should succeed him. Minos called Poseidon for assistance and promised to sacrifice whatever appeared from the sea to the god. Poseidon sent him a magnificent bull, so that the dispute was resolved and Minos became king of Crete. However, he liked the bull so much that he did not want to sacrifice it, but instead had another ox offered up. Poseidon recognized the deception and hit Minos' wife Pasiphae as punishment with the desire to unite with the bull. She had Daidalos build a wooden frame for her that was covered with cowhide. In it she hid herself and allowed the bull to mate her. As a result of this union, she gave birth to a man-eating monster: the Minotaur , a being with a human body and a bull's head.

In the course of his eighth work, Heracles brought the bull to the Peloponnese . There the wild beast caused great damage. Androgeos , one of Minos' sons, wanted to test his skills in the fight against the bull, but fell victim to it. When Minos received the news, he started a campaign of revenge against Athens ; for some said that King Aigeus of Attica had sent Androgeus to the animal.

Minos and the Athenians

He first moved against Megara , where Nisos ruled, a brother of Aigeus. A lock of purple gave Nisos immortality. However, his daughter Skylla fell in love with the strange king and cut off her father's lock. Minos won, but thanked the girl badly: he let her dragged through the sea tied to his ship.

At first, however, Minos could not do anything against the defensive Athens. So he called his father Zeus for help; he heard him and sent plague and famine. After their surrender, Minos imposed a cruel tax on the Athenians: every nine years they had to send seven youths and seven virgins to Crete, where they were sacrificed to the Minotaur.

Minos and the Labyrinth

He had Daidalos build a labyrinth for the Minotaur. The youths and virgins were sent in and thus thrown to the monster to eat. Only Theseus , the son of Aegeus, ended this sacrificial rite by going with him and killing the Minotaur. Minos' daughter Ariadne helped him with her thread ; only in this way could he find his way out of the labyrinth. When the hero left Crete, he took Ariadne with him.

Angry, Minos then locked the architect Daidalos with his son Icarus in the labyrinth. They managed to escape and fled the island with the help of self-made wings. Ikaros did not survive the flight because he got too close to the sun. The wax used to fix the feathers melted and he fell into the sea. But Minos pursued Daidalos as far as Sicily , where he had found protection with King Kokalus . Kokalos received the cretan king with pretended hospitality, but had him killed in the bath. Depending on the version, Minos was drowned there by Kokalos' daughters or killed by boiling water. Long after this, Theron , tyrant of Akragas , is said to have found the bones of King Minos and sent them back to Crete. 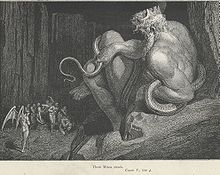 After his death, the wise earthly king Minos with a golden scepter reigned as judge of the dead in the underworld , at the side of his brother Rhadamanthys and his half-brother Aiakos .

After Minos, the culture of ancient Crete was known as Minoan by Arthur Evans , which goes back to a naming by Arthur Milchhoefer . The palaces of Phaistos and Knossos are important evidence of this culture ; The latter was possibly the origin of the legend of the labyrinth because of its winding architecture.

The connection between Minos and the Minoan culture is not considered to be certain, however, since Homer describes him not only as the son of Zeus, but also as an Achaean , who are mostly equated with the Mycenaean Greeks. However, the retrospective appropriation was pursued, like that of Zeus and Europe, in order to increase the importance of Zeus. At the heyday of the Cretan civilization around 1600 BC The belief in Zeus was not yet established. This probably sat in the dark centuries or even as late as 800 BC. By. The Parian Chronicle dates Minos between 1462 and 1423 BC. BC, which would correspond to the late Minoan transition from the new palace period in phase SM I B to the third or Cretomycian palace period in SM II on Crete.