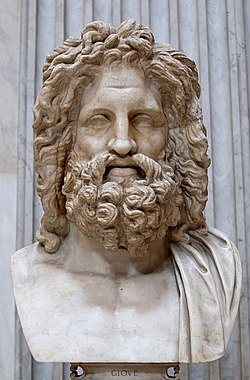 Zeus ( ancient Greek Ζεύς , classic debate about " dze-US "; Modern Greek Ζεύς or Δίας Dias , Latin  Jupiter ) is the supreme Olympian god of Greek mythology and more powerful than all the other Greek gods together. Only fate personified stood above him - his daughters, Moiren . He too had to submit to them. Zeus corresponds to the Roman mythology the Jupiter .

The name comes from the same Indo-European word root * diu ("bright", "day"), which is in Latin Iuppiter and the Vedic- altind. Dyaúh pitá "Heaven Father" is included. It is an expression of a common Indo-European image of God and derived from the respective words for "God"; z. B. Latin deus , Germ. * Tiwaz and Vedic-Altind. devá . 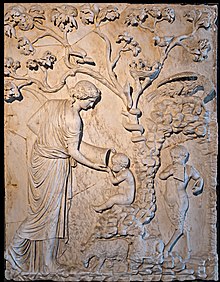 The feeding of the boy Zeus by a nymph 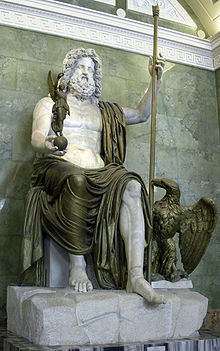 Zeus is a son of the titan couple Kronos and Rhea (hence the nickname or patronymic : Kronion - Κρονίων , Kronides - Κρονίδης ) and brother of Hestia , Demeter , Hera , Hades and Poseidon . According to Hesiod, Kronos devours all his children immediately after birth, because he feared that they might disempower him, just as he had disempowered his father Uranus . When Zeus was about to be born, Rhea, on the advice of Gaia and Uranus , decides to bring him into the world in secret. She goes to a cave near the city of Lyktos on Crete , whereupon the newborn Zeus is hidden by Gaia. Instead of Zeus, she gives Kronos a stone wrapped in a diaper, which he devours. According to other traditions, the birthplace of Zeus is in a cave on Mount Dikti or Ida , where he is raised by the nymphs Adrasteia and Ide , cared for by the goat Amaltheia and protected by the Curetes . He owes his nickname Idaios to this variant of the myth (see also wet nurses of Zeus ).

According to Hesiod, he grows up quickly and, with cunning and with Gaia's help, brings Kronos to first the stone and then all his swallowed children again. In the library of Apollodorus , Zeus turns to Metis , who gives Kronos a drug that makes him spit.

Fight against the titans

As the ruler of the assembly of gods, Zeus is already portrayed in Homer , but without an explanatory myth. According to Hesiod, Zeus and his siblings have to fight their father Kronos and the giant titans in order to rule the world. They fight from Mount Olympus against the titans who have holed up on the Othrys . When the battle has not yet been decided after ten years, Gaia advises him to free the Titan brothers and sisters, the Cyclops and Hekatoncheiren , who have been imprisoned in Tartarus . From the Cyclops he received lightning, fuse and thunder as weapons, the Hekatoncheirs stood by his side fighting. The titans are defeated by the gods and banished in the Tartaros, the Hekatoncheirs become their guardians. Gaia advises the gods to make Zeus their ruler. This divides the world into three realms: Zeus himself rules the sky, Poseidon the sea and Hades the underworld.

In the library , Zeus first has to kill the Kampe to free the Cyclops and Hekatoncheirs. In addition, Hades and Poseidon also receive weapons from the Cyclops, who also actively participate in the fight.

There are many different versions of the fate of Kronos. Homer and other texts report that he is caught with the other titans in Tartarus. Orpheus describes in his stories that Kronos is held captive in the cave of Nyx until infinity . Pindar reports of the release of Kronos from Tartaros and that Zeus made him ruler of Elysion .

Fight against the giants

The rule of the Olympian gods under Zeus was threatened by an attack by the giants. In the gigantomachy, however, the gods conquered the giants.

The shield of Zeus is called Aigis or Aegis (Greek goat skin). This was forged by Hephaestus and is usually depicted as a scaly and snake-reinforced neck collar. The aegis is a symbol of the protective care (aegis) of the gods. 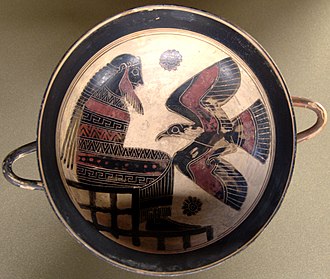 Zeus was married to his sister Hera , with whom he had four children, Ares, Hebe, Eileithya and Hephaestus. But he also had many affairs, including with the goddess Leto , a daughter of the titan Koios , who gave birth to Apollon , the god of light and music, and Artemis , the healing goddess of nature and the hunt, or Leda , of the he got the Dioscuri Kastor (Castor) and Polydeukes (Pollux). He was also the father of many nymphs, demigoddesses and mortals. These liaisons never lasted, mainly because of Hera's excessive jealousy. However , he took care of the children who had developed from these affairs (including Heracles and the beautiful Helena ). The only lasting love affair was probably that with the king's son Ganymede . This was so beautiful that Zeus kidnapped him in the form of an eagle to Mount Olympus . There he served him as cupbearer . According to Homer, the goddess Aphrodite is also said to have been a daughter of Zeus and Dione . More common, however, is the version of Hesiod , according to which it originated from the foam (hence its name, from Greek: aphros = foam) that had formed around the cut genitals of Uranos in the sea off Kythera . His favorite daughter Athena , the goddess of wisdom, sprang from his head, although Hephaestus may have helped. But other gods also descend from him, such as Dionysus , the god of wine (see thighbirth ), the goddess Iris , who, as an ambassador, ensured communication between people and gods, or Hermes , the messenger of the gods and patron god. 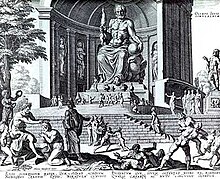 The oldest and first Zeus oracle , famous in antiquity, was located in the oak grove of Dodona (the oak is also the sacred tree of Zeus). There was also an oracle of Zeus in Olympia ; Zeus Olympios was worshiped here. In Crete , cults related to his birth and childhood with cave and nativity cults. See also Psychro Cave , Idean Grotto .

Zeus was worshiped as an all-god, as a thinking fire that pervades everything, as the father of gods and humans, as the god of weather, as the god of fate, etc. The epiphany of Zeus is always lightning , for example in Homer .

Since Zeus was considered to be the ruler of gods, his cult was often associated with monarchs. It is significant that the great Temple of Zeus in Athens , the Olympieion , began during the tyranny of Peisistratos , was continued by King Antiochus IV and only completed under Emperor Hadrian , while construction work was suspended during the time of the Attic democracy.

The worship of Zeus did not go out until the end of late antiquity around the year 600 AD.

Depending on the type of worship, Zeus was given various surnames, such as:

Zeus also plays an important role in ancient philosophy . The Orphics saw Zeus as the ground of the world, the Platonist Xenocrates identified Zeus with the cosmic nous , in the philosophy of the Stoa Zeus was understood as the primal force or cosmic reason .

Zeus in the fine arts 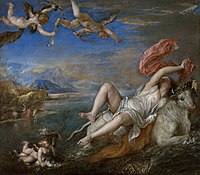 Titian : The Rape of Europe , oil on canvas

The best-known representation of Zeus is the colossal statue of Phidias in Olympia , which is no longer preserved . There are also numerous depictions of Zeus as a warrior with the attribute of the lightning bolt or the scepter, enthroned as the father of gods.

The numerous robberies of girls and women by Zeus were often depicted, such as the robbery of Europa and the like, but also that of the boy Ganymede . His attributes are scepter , eagle , bundle of lightning , helmet , sometimes also the oak wreath , his companion sometimes the goddess of victory Nike .