The three graces
relief at the temple of Aphrodite in Aphrodisias , 1st century BC. Chr. 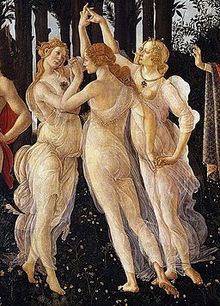 The three graces - detail from Primavera by Sandro Botticelli, around 1482/1487 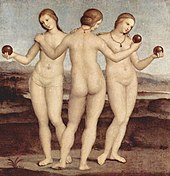 The Charites (Χάριτες Chárites , singular Charis ) are only "sub-goddesses" and servants of the main gods in Greek mythology , who are associated with Aphrodite , but also Hermes and Apollo . In Roman mythology they correspond to the three graces , lat. Gratiae .

They are daughters of Zeus and the Eurynomial and are called Euphrosyne (the "cheerful one"), Thalia (the "blooming one") and Aglaia (the "radiant one"). They brought grace, beauty and festivity to men and gods. The three Charites or Graces were a popular subject in the visual arts and were mostly depicted unclothed, touching or hugging each other. One of the most famous paintings - " The Three Graces " (Chantilly, Musée Condé) - is by Raffael .

According to Cornutus , de natura deorum , the name is derived from the Greek chara "joy", the Greek verb for this is chairein ("to be happy") → Latin gratia .

The Roman philosopher Seneca understands the movements of the three graces as a complete representation of generosity.

Most of the ancient sources agree on Zeus as a father, but mention as a mother:

According to other genealogies, the Charites are also referred to as daughters of Nyx and Erebos , Hecate and Hermes or those of the nymph Aigle and the sun god Helios (according to Antimachos ). As moon deities (see below), they are said to have Uranus as their father.

In Nonnos of Panopolis Dionysiaka occur Dionysos and Hera on as a parent.

In Roman mythology the graces are daughters of Bacchus or Liber and Venus ( Virgil ).

“Originally there was probably only one Charis. She appears as the wife of Hephaestus [Vulcanus, ed.], Which is probably to be understood to mean that the maker of charming works of art is assigned the personified charm (= charis). "

According to Pausanias (Greek writer of the 2nd century AD), some ancient sources name only two Charites:

a) How the Athenians venerated them since ancient times:

b) How they worshiped the Lacedaemonians in Laconia :

In both cases the names refer to the phases of the moon (which was "called" with noise during new moon festivals).

Like Hesiod, most ancient sources name three Charites or Graces (from the youngest to the oldest):

According to Pausanias, a grace called Peitho or Suadela comes fourth in some sources or is named instead of Euphrosyne according to Aristophanes .