Animation of the moon phases. In addition, proximity and distance to the earth can also be observed as fluctuations in size and libration as "staggering".

The changing light shapes of the moon are called moon phases . They arise from the perspective change in the position of its day-night boundary relative to the earth during its orbit. The common division into four quarters, each about a week long. An entire moon phase cycle from one new moon to the following new moon is also called lunation and lasts on average about 29.5 days.

One orbit of the moon around the earth, after which the moon will again assume the same position to the sun , takes an average of about 29.53 days (29 days, 12 hours and 43 minutes). This period of time is called the synodic month and corresponds approximately to the length of a calendar month . In fact, both the term month and the length of the calendar months are derived from the synodic orbit of the moon. The length of a single period - a lunation - is, however, subject to relatively large fluctuations of over ± 6 hours (for the mean, see also synodic period ).

During the movement of the moon around the earth, the angle that is spanned by the connecting lines earth-moon and earth-sun in the imaginary triangle earth-moon-sun changes, the so-called elongation of the moon. For an observer on earth, this changes the perspective with which he sees the moon. This can be seen in the changed position of the day-night boundary on the side facing the earth and thus as a change in the light shape of the moon in the sky above the earth. When going through the moon phase cycle from the new moon, the phase , as the portion of the moon surface that is illuminated by the sun and also visible from the earth, first increases and then decreases again.

The counterpart of elongation is the phase angle of the moon, which is spanned in the imaginary triangle earth-moon-sun by the connecting lines moon-sun and moon-earth. For example, when the crescent moon increases, exactly one half appears illuminated, since the phase angle is exactly 90 °. At this stage, the elongation is almost a right angle at around 89.85 °. The third angle in the imaginary triangle is the one at which the earth-moon distance would appear to an observer on the sun - maximum, at a half moon, about 0.15 °. Because the distance between the sun and the earth and the moon is almost four hundred times greater than the distance between the earth and the moon, from this perspective he would now see both of them at an angular distance of about 9 ' arc minutes , their sun-facing side fully illuminated.

The phases of the moon were also called calf in the past . For Martin Luther the waning moon is called old light , the waxing young light .

Light effect of the moon 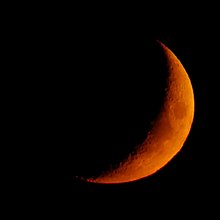 Waxing moon with 23 percent visible surface, taken about 4 days 16 hours after new moon on October 13, 2018 in the night sky in Berlin. A quarter of an hour before sunset, the crescent moon is only a few degrees above the horizon, which is why it appears reddish, similar to the low-lying sun (see →  Rayleigh scattering ).

As the moon phases change, the night on earth is brightened very differently, and astronomers usually have to avoid the bright “moon nights” around the full moon when observing with optical telescopes .

At the new moon, the earth-facing side of the moon is not illuminated by the sun, so it is dark and - covered by the atmospheric blue of the sky - rises and sets with the sun near it. The new moon is only visible when a solar eclipse occurs, every few years in the same location .

The very narrow new light crescent is so close to the sun that it can only be seen shortly after sunset. A few days after the new moon, the waxing crescent moon is so high in the evening that it can be observed over the horizon in the night sky even after the end of astronomical twilight . One week after the new moon, the crescent moon can be seen for the entire afternoon and shines half the night until it sets around midnight.

Four effects contribute to the strong light effect around the time of the full moon:

When the sky is clear, a high full moon, which is more common in winter , illuminates the earth for a few hours so brightly even at sea level that colors can be perceived with the dark-adapted human eye, for example a meadow appears green. The illuminance is then up to 0.25  lux , 250 times that of a starry new moon night (0.001 lux).

The more you stay, move or live without artificial light sources (city, electricity, vehicle and street lighting, hidden by mountains, vegetation, without fire), the stronger you become as a sighted person with moonlight - depending on the moon phases and cloud cover influences its possibilities at night. On a lonely road with no shadows from trees, when the moon is full you have a view that is actually sufficient for running and (lonely) cycling and evenly bright to the horizon. Street lighting and bicycle lights are at least 40 times as bright at around 10 lx or more, but only in the illuminated area. Such lighting also largely fades the illumination of the distance by moonlight.

In numerous books, a connection between moon phases and different life situations is established. The position of the moon is said to have an impact on sleep , the frequency of accidents, complications during operations and births, and hair growth . Studies have not been able to find any evidence for any such claim and are therefore considered to be refuted .

In particular, the alleged moon phase cycle of 28 days (actually a good 29.5 days) has influenced the concept of " biorhythms " that are supposed to affect all areas of life in German-speaking countries for over a hundred years . There is also a persistent conviction that the alleged average length of the menstrual cycle of human women of 28 days can be explained by the allegedly 28-day moon phase cycle . It has long been known in gynecology that the cycle can fluctuate between 23 and 35 days even in healthy women. This theory is also unable to explain why the menstrual cycles in the various mammals are of different lengths and why their duration differs greatly on average from the moon phase cycle.

Origin of tidal forces by the moon: tidal forces on the earth's surface as the sum of the gravitational force of the moon and the centrifugal force caused by the revolution of the earth around the center of the bary . The reference system is the earth.

Gravity of the moon

The tides are triggered by the gravitation of the nearby moon, which, due to its own motion, apparently orbits the earth in 29.53 days less often than the sun does. During an apparent lunar orbit of 24h 49min, water is pulled together to form a tidal wave when the moon is at its highest level (the actual tidal wave, however, runs as a flow process around the earth's equator with a time delay, accumulates on coasts, sloshes up in constrictions and resonates in places).

As a system of two celestial bodies rotating together, earth and moon have a common center of mass ( barycenter ). This lies on the line connecting the centers of the earth and moon, but due to the much larger mass of the earth, it is inside the earth's body. On the side facing away from the moon, the forces of gravity are counteracted by higher centrifugal forces. The liquid and gaseous elements are therefore "thrown off". The 2-phase (24h 49min) / 2 is explained by the interaction of the gravitation of the moon and the barycentre.

Gravity of the sun

The sun supports the effect of the moon to the maximum when the three celestial bodies involved are on one line, i.e. with full and new moon: Spring tide occurs every 14.77 days, i.e. the highest tidal range between ebb and flow . On the other hand, nipp tide when the moon, earth and sun are at right angles to each other in an L-configuration, i.e. at a half moon.

For example, the phases of the moon - theoretically around the phase delay of the tidal wave, i.e. a little ahead - show the exact sequence of high and low tidal range as an indicator, which, however, is still practically overlaid by the effects of wind and weather (air pressure).

An older German rule of thumb for the light figure of the moon phases is based on the German cursive : When writing the letter a , you start with an arch curved to the left. This shows the orientation of the narrow crescent of a bnehmenden moon, as seen by an observer in the northern hemisphere. The example of the handwriting on the other hand with an arched right arc begun and represents the z unehmenden moon.

A Latin Wish rule is luna mentitur (translated: "The moon is lying") with similar terms of letter forms: the crescent moon shows us when removing a C as crescens (increasingly), and it shows us the rise a D as decrescens (, decreasing '). 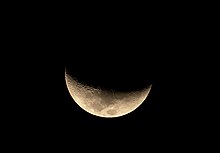 "Lying" sickle of the waxing moon, as it can be observed near the earth's equator (here from the southern tip of India, at 9.5 ° north latitude )

All these rules of thumb apply in this form only in middle to high northern latitudes; In the southern middle to high latitudes, however, the reverse is true. Due to the almost horizontal position of a crescent moon when rising and setting, they are difficult to use between the tropics and depending on the season.

There are symbols for the phases of the moon in both astronomy and astrology . These represent the phase as a pictogram. Sometimes they are also decorated with faces . Since they are of European origin, they correspond to the sight of the moon in the northern hemisphere. In the southern hemisphere, the moon is seen upside down, which can confuse the symbols.

The commonly known phases of the moon are to be distinguished from the terms nosing and obsessive . These terms, which come from Upper German , are mostly translated as the rising and falling moon . What is meant is that the orbit of the moon across the sky seems to run higher and higher from day to day during one half of the month, whereas the opposite is the case during the other half of the month ( tropical month ).

A full moon during a total umbra eclipse is also known as a "blood moon" because of its color.

The phases of the moon are independent of the current distance between the moon and the earth on its elliptical orbit ( anomalous month ). If the moon is closest to the earth ( perigee ) during the full moon , this is known as the " super moon ".

Commons : phases of the moon  - collection of images, videos and audio files