The title of this article is ambiguous. For the German writer see Jona Mondlicht .

Moonshine is a redirect to this article. Further meanings are listed under moonlight (disambiguation) . 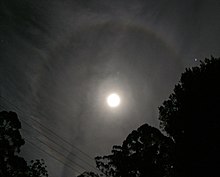 The moonlight , i.e. the light reflected from the moon , be it as the glow of sunlight (moonlight) or as a reflection of earth light ( earth light ), is on average only one millionth of the sunlight that reaches the earth directly. Nevertheless, the moon appears dazzlingly bright from the half-moon, which is due to the contrast to the darker star sky and the adaptation of the eye. The color temperature of the moonlight is about 4120 K . The intensity of the moonlight essentially depends on three factors:

The latter two factors also affect the color of moonlight.

The phases of the moon at intervals of about 3.7 days.
The crescent moon has only about 11 percent of the full moon brightness.

The brightness of the full moon fluctuates with its distance from the earth by up to 17 percent or about 0.2  mag and is on the average −12.5 mag on the astronomical brightness scale.

The brightness of the crescent moon is not around 50 percent in relation to the full moon, as one might initially think, but only around 11 percent, since only that portion of the diffusely reflected light reaches the earth that is reflected back approximately at right angles to the solar radiation, and the surface relief of the Moon also casts shadows. With a very narrow crescent, the brightness is only three to five percent that of the full moon. In addition to the bright, sun-irradiated part of the surface of the moon facing the earth, one can often see the darker part, which is not illuminated by the sun itself, but by the earth illuminated by the sun. This reflection of the earth's light, the “ ash-gray moonlight ”, makes up about 0.01 percent of the moonlight at full moon.

Compared to the full moon, the sun (−26 mag) is up to 400,000 times brighter. The sunlight reflected by the brightest planet Venus (−4.4 mag) has about one 1500th of the brightness of the moon and the light emanating from the brightest fixed star Sirius (−1.5 mag) reaches the earth with about 25,000 times less brightness than the full moon . On a clear night, its illuminance on earth is around 0.2 lux . The mentioned differences appear to us to be considerably subdued, because the sensory impressions of the eye are perceived subjectively according to their intensity differences, scaled approximately logarithmically (see Weber-Fechner law ).

The halo or court of the moon can also be a noticeable phenomenon . On cold autumn and winter nights, high layers of air can contain ice crystals that deflect parts of the moonlight to the side, creating a bright, sometimes slightly greenish, mother-of-pearl- colored ring. Depending on the location of these ice clouds, it can only be a few degrees, but also around 20 degrees and (very rarely) up to over 40 degrees. The moonlight is only insignificantly weaker.