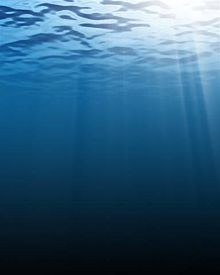 Decrease in brightness with water depth

Brightness is an umbrella term for subjective impressions and objective measurands for the strength of a visual perception of - visible - light .

Brightness as a sensation

The words brightness and darkness as well as darkness are mostly used for the subjective sensation of light as it affects the eye of the observer - in this sense, darkness is a lower degree of brightness.

Conceptually, a degree of brightness can be grasped by two concepts,

Many animal creatures have developed a visual system in which two sub-systems can be distinguished, which are activated in different brightness ranges : In the daytime lighting conditions, in the photopic range , the sensory cells ( cone cells ) of one component are addressed (day vision) , in the During the night, in the scotopic area , only the sensory cells ( rod cells ) of the other component (night vision) prevail, in the mesopic transition area in twilight still both.

Below the visual threshold of the scotopic area, nothing is perceived with the eye, there is darkness - even if the light or illuminance is not yet zero ( residual light ). Color perception only works with enough light, below only gray tones are perceived, above only “white”. Excessive brightness leads to glare , the sense of sight fails. The physiological thresholds of the sense of sight are quite different in all living beings, and in humans they fluctuate relatively significantly.

The sensation of brightness is roughly proportional to the logarithm of the stimulus - like many other neurological processes, it follows the Weber-Fechner law . The perception of brightness can be slightly different for different people or for both eyes. In particular, it depends on the spectral sensitivity of the visual cells for daytime vision (photopic vision) at medium wavelengths, which for most people is highest in the range around 555 nm wavelength (yellow-green), roughly corresponding to the maximum of solar radiation . In many animals, this maximum of perception for brightness is at other wavelengths, and therefore for other colors, as was found in cats or bees . The more precise distribution of the brightness sensitivity of the human visual apparatus as a function of the spectral light color describes the V-lambda curve .

The human eye works in a very large brightness range, which corresponds to light intensities of 1: 10 billion. The visual threshold is 10 -13 lumen . Nevertheless, we can perceive different brightnesses as different as soon as their amount of light differs by more than 10%. The photometric step method for apparent brightnesses , which the astronomer Friedrich Argelander developed around 1840, is based on this.

If brightness is to be determined objectively, two effects must be taken into account.

The term brightness is understood more generally as the intensity of the radiation acting on an observer or sensor , which is averaged spatially and over a frequency band with neighboring electromagnetic radiation.

For a definition of the brightness you have to determine whether the transmitted electromagnetic energy should be decisive ( radiometry ) or whether you want to take into account the spectral sensitivity of the human eye ( photometry ). The radiant power is the energy per unit of time, measured in watts . It plays a role in technical sensors; in astronomy it is called bolometric brightness . The spectral sensitivity of the human eye (V-lambda curve) must be taken into account for the visual impression. The corresponding quantity is called luminous flux , measured in lumens . In astronomy one speaks of visual brightness . “Luminosity” can mean both.