This article covers the technical component. For the cell type, see receptor cell . 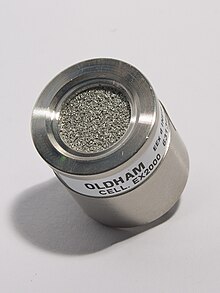 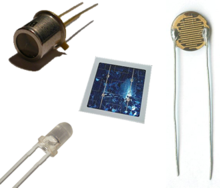 A sensor (from Latin sentire , dt. "Feel" or "feel"), also called a detector , (measured variable or measuring) transducer or (measuring) sensor , is a technical component that has certain physical or chemical properties ( physically e.g. quantity of heat , temperature , humidity , pressure , sound field sizes , brightness , acceleration or chemically e.g. pH value , ionic strength , electrochemical potential ) and / or the material nature of its environment qualitatively or quantitatively as a measured variable . These variables are recorded using physical, chemical or biological effects and converted into an electrical signal that can be processed further .

With the increasing demand for fast, affordable and reliable information in today's world, single-use sensors - inexpensive and easy-to-use devices for short-term monitoring or for single measurements - have recently become increasingly important. With this class of sensors, critical analytical information can be accessed by anyone, anywhere, anytime without recalibration and without worrying about contamination.

The distinction between the terms sensor and measurement sensor , probe , measuring device , measuring means , etc. is fluid, since the sensor elements are further allocated in addition to the actual receiver part of the measurement chain. Related terms are also not clearly defined in the literature.

Sensors can be classified according to their size and production technology, as well as their intended use and purpose. In addition, a distinction is made between sensors according to their mode of action when converting the variables into passive and active sensors.

Sensors can be divided into active and passive sensors based on the generation or use of electrical energy.

Active sensors generate an electrical signal based on the measuring principle , e.g. B. electrodynamic or piezoelectric . These sensors are themselves voltage generators and do not require any auxiliary electrical energy . With these sensors, however, due to the physical principles, only a change in the measured variable can often be detected, since no energy can be supplied in the static or quasi-static state. An exception is e.g. B. the thermocouple , which constantly generates voltage even with a constant temperature difference. In addition, active sensors, reversing the physical measuring principle, can also be used as actuators , e.g. B. a dynamic microphone can also be used as a loudspeaker.

Passive sensors contain passive components whose parameters are changed by the measured variable. These parameters are converted into electrical signals by primary electronics. An externally supplied auxiliary energy is required. With these it is possible to determine static and quasi-static measured variables. For this reason, the majority of the sensors are of a passive type.

Modern sensors often have extensive secondary electronics that are operated using externally supplied energy. However, not all of these sensors are active; the measurement process itself has to be considered.

→ Main article : sensors based on the measuring principle

According to intended use

Sensors that detect radiation (e.g. light , X-rays or particles ) are called radiation or particle detectors . A normal microphone is also a sensor for the acoustic pressure .

Virtual sensors (or soft sensors ) do not exist physically, but are implemented in software. They “measure” (calculate) values ​​which are derived from the measured values ​​of real sensors with the help of an empirically learned or physical model. Virtual sensors are used for applications where real sensors are too expensive or in environments where real sensors cannot survive or wear out quickly. Further use cases are processes in which the desired values ​​cannot be measured because there are no hardware sensors that can be used in the process or when the process cannot be stopped for calibration and maintenance of classic sensors. Virtual sensors are already used in the chemical industry and are increasingly being used in other branches of industry such as B. the plastics industry.

In the field of automation, analog control engineering systems are increasingly being replaced by digital systems. Therefore, the need for sensors whose output signal is also digital is increasing. A simple structure results when the A / D converter is integrated into the actual sensor system. This can, for example, be based on the delta-sigma modulation technique and thus offer many advantages:

The disadvantage is that the PWM generated in this way often cannot be evaluated directly and must first be filtered. This can be done through an analog filter and subsequent ADC or completely digital. In addition, the transmission path to the evaluating system is analog and therefore prone to failure. Simple sensors for pressure and temperature therefore have a real digital data output with connection via a serial or parallel bus. The following are widespread here:

Molecular sensors are based on a single molecule which, after binding another molecule or after being exposed to photons, has different properties that can then be read out. With fluorescence-marked sensors, more than two states can be detected by changing the emission spectrum . This means that such a sensor can also be used as a molecular locking system .

The term sensor is used in technology and in the life sciences ( biology and medicine ), and for some years now more and more in the natural sciences . Example of the latter are applications of CCD - image sensors and particle counters in astronomy , geodesy and aerospace .

In technology, sensors play an important role as signal transmitters in automated processes . The values ​​or states recorded by them are processed, usually electrically - electronically amplified , in the associated control system , which triggers the corresponding further steps. In recent years, this subsequent signal processing has also increasingly been carried out in the sensor. Such sensors include a microprocessor or a micro system and have, so to speak "intelligence" so they are as smart sensors (Engl. Smart sensors ), respectively.