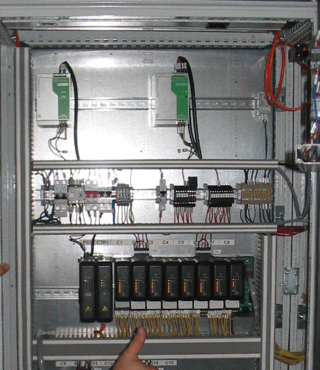 The degree of automation is higher, the more independent complex machines and systems are from human intervention. Thanks to advances in signal acquisition and primarily electronic signal processing, the degree of automation has been increased significantly. In addition to relieving people of dangerous, strenuous or routine activities, quality improvements, higher performance of the machine or system, and a reduction in personnel costs are the motivation to use automation technology. Human activities are mainly reduced to the elimination of malfunctions, material replenishment, removal of finished parts, maintenance and similar work.

The importance of automation technology

Automation technology is an independent specialist discipline for use in all areas of technology.

Continuous measurement is a prerequisite for automatic control. For a large number of physical quantities, measurement methods have been specially developed for automation. This has resulted in the manufacture of a wide variety of sensors . Example: Flow measurement using the Coriolis force . The reading itself is predominantly as a standardized unit signal provided.

This task was largely abstracted with a variety of actuators . Instead of a connection-oriented controller (VPS), a flexible programmable logic controller (PLC) was developed.

All causal relationships in a control loop have been formulated independently of the application. A wealth of strategies and solutions for setting the actuators based on the measurement data of the sensors is available for the specific application.

The higher the degree of automation , the more sensors and actuators are used. For networking are fieldbus systems such. B. PROFIBUS , Interbus , AS-Interface (formerly: ASI), real-time Ethernet systems such as PROFINET or EtherCAT and wireless transmission systems are used. Networking close to the machine is in most cases part of a closed chain of effects and must therefore meet corresponding real-time requirements.

The role of the operator of a machine or system is analyzed. The operator must be informed sufficiently, in good time and without errors about the current operating conditions so that he can make the right decisions in good time. The command initiators must be easily accessible and the options must be intuitive. Commands are subject to a plausibility check.

Compliance with regulations is a prerequisite for the creation of machines and systems. The automation technology discipline is significantly involved in the formulation of these regulations. Example: explosion protection .

The automation specialists work here with the machine designers or process engineers. There are proven methods for doing this. Example: piping and instrument diagram as a basic document.

The fly-by-wire concept for aircraft is an outstanding example of results . 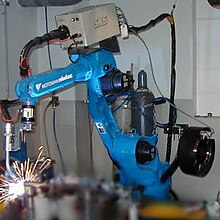 Originally, automation technology was used in energy technology and chemical technology as well as in large-scale production . However, through the use of more flexible systems it is now possible to at least partially automate the production of small series down to individual items.

The limit for the use of automation nowadays mostly results from economic efficiency:

Automating complex motion sequences is in principle possible in most cases, but can be costly if it requires the use of complex robots (and their programming ). In many cases it is cheaper to use human labor - even with the wage level of western industrialized countries. This is especially true for the assembly of products (final production). Although the suitability of a product for automated production can be improved by appropriate design , this is not always desired or economically viable.

Another limit of automation technology is where creative decisions or flexible problem solving are required - an automation system can rarely solve these tasks in a satisfactory manner.

The design, implementation and commissioning of automation functions are strongly method-oriented. Methods and solutions are the result of a generalized (abstracting) model observation of real physical systems. The methods of automation technology are partly tailored to specific processes.

Control valve as an actuator in automated process engineering systems

Most of the developed general methods of modern process automation use theoretically or experimentally determined models of the processes in analytical form. On the basis of these models, knowledge-based methods for designing and commissioning the various automation functions can then be developed. This includes methods like

With knowledge-based approaches, for example, automation systems are created that contain model-based regulations and controls (self-adjusting or continuously adaptive) and monitoring with error diagnosis. Depending on the information, they can make decisions.

The process-oriented methods are used to develop processes and mechatronic systems. These include, for example, the computer-aided modeling, simulation and digital control of robots, machine tools , combustion engines , motor vehicles, hydraulic and pneumatic drives and actuators, for which methods for error diagnosis are also developed and tested in practice. The automation solution should be adapted to the existing infrastructure and the established processes. The development and practical testing of methods of computational intelligence , i.e. the interaction of fuzzy logic , artificial neural networks and evolutionary optimization algorithms, are of particular importance .

Automation and rationalization go hand in hand. Less manual work is required in production, productivity is increased while wage costs fall. In economic terms, automation is a major reason why the decreasing workload due to increasing productivity is compensated for by economic growth, provided that the total amount of work in an economy remains constant. But automation also creates jobs. New machines and systems with a higher degree of automation are being manufactured. These usually have a larger market. Existing systems and machines have short production times because there are constant improvements.

The successes and importance of the key industries are inconceivable without the constant improvements in automation. Automatic machines reduce the dangers involved in operating systems and also reduce the amount of monotonous work for people. Automation is not limited to industrial applications. Examples in the service sector are automatic payment transactions at banks or automatically generated electricity bills. Many activities in the household (e.g. washing clothes with the help of a washing machine ) or in everyday life (targeted regulation of the brake pressure of a car with the help of an anti-lock braking system ( ABS ) or ESP ) are made easier or even made possible by automation.

Automation technology has many roots that go back to times when the term itself was not yet established.

In 1785 Edmond Cartwright invented the fully mechanized loom . Perforated wooden boards or wooden punched cards were used to create patterned fabrics even before that. The automated looms destroyed many jobs and lower wages led to the weaver revolts.

1788 - James Watt did not invent the steam engine, but developed it significantly. Outstanding was the use of a mechanical centrifugal governor in 1788, which influenced the steam supply and was thus able to keep the speed constant. According to today's terminology, this was a proportional controller without auxiliary energy with negative feedback. Centrifugal governors were previously used in mills. He also added a safety valve to the steam boiler for the first time. In connection with the steam engine, there is talk of the beginning of the industrial revolution.

In 1796 , Antonie Favre from Geneva is credited with inventing the drum music box. The mechanism was based on a tongue comb and sprocket. As a result there was a wide variety of "automatic" musical instruments. The cam switch was often used for machine controls.

In 1833 , Samuel Morse built the first usable electromagnetic write telegraph. The characters were coded and transmitted serially. This led to the teleprinter and standardized serial interfaces. These were then the basis for today's bus systems.

In 1939 , Hermann Schmidt founded the technical committee for control engineering in the VDI in Berlin. He submitted a memorandum to the VDI on the establishment of an institute for control engineering. The term "general regulatory knowledge" coined by him includes technical and biological systems and therefore corresponds in content to the cybernetics term according to Norbert Wiener .

1941 provides Konrad Zuse 's Z3 computer in front. This worked with binary floating point numbers. In today's parlance, it was a computer. The age of the digital revolution began.

1944 receives Hermann Schmidt 's reputation as a full professor in the first chair of Automatic Control in Germany at the Faculty of Mechanical Engineering of the Technical University Berlin-Charlottenburg, where he remained until his retirement in 1960th

1947 characterizes Norbert Wiener the concept of cybernetics . Among other things, the feedback mechanism on biological and technical systems is examined here. Another term is communication theory .

1948 characterizes William B. Shockley the term transistor for the already developed semiconductor devices. The microprocessor followed in 1970/71. A stormy development of computer technology began, which had an extreme influence on the possibilities of automation technology.

In 1954 Erwin Gigas developed a motorized theodolite with automatic photographic registration in Frankfurt .

1969 is Richard Morley 's "solid-state sequential logic solver" before (semiconductor-based sequential locking solution). That was the birth of the programmable logic controller (PLC) .

1970 Foundation of Universal Product Coding (UPC) and introduction of barcodes in the USA. 1977 Introduction of the European EAN code ( European Article Number ). The barcode is read with optoelectronic reading heads (scanners). These identification methods were the basis for automatic goods control ( logistics ). Barcode technology is increasingly being supplemented by RFID technologies.

1977 the company IC Eckhardt has worldwide success with the pneumatic cross-bellows regulator. Today pneumatic controllers have almost completely disappeared from the market because the use of intrinsically safe signal lines has replaced this technology.

In 1995 the first satellite-based positioning system ( GPS ) went into operation. In addition to the development of navigation systems , this led, among other things, to the automatic steering of agricultural machinery.