This article is about the Scottish inventor James Watt. For the US Secretary of the Interior of the same name, see James G. Watt 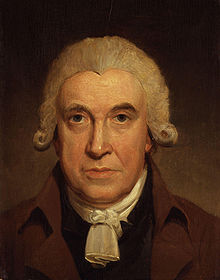 James Watt [ d͡ʒe̯ɪmz wɔt ] (born January 19 jul. / January 30,  1736 greg. In Greenock , † August 25, 1819 in his home in Heathfield, Staffordshire ) was a Scottish inventor . His most influential invention was to improve the efficiency of the steam engine by moving the condensation process from the cylinder to a separate condenser . Watt himself considered the linkage he designed, the Watt parallelogram , to be his greatest invention. He equipped his steam engines with the centrifugal governors known from windmill construction to keep the speed constant in the event of load fluctuations.

James Watt was born to poor but very educated parents. His father was a carpenter and designer of nautical equipment, Watt's grandfather was a math teacher and Scottish nationalist. James was a sickly child who suffered from chronic headaches, among other things. His parents therefore taught him some of their own. Even as a boy, he liked to experiment and is said to have researched the functionality of every object he could get his hands on. In addition, Watt was an avid collector of plants and stones, read a lot and invented stories.

However, his parents were too poor for a medical degree, which Watt was interested in. That is why Watt began an unofficial mechanic apprenticeship in London after he could not find a teacher in Glasgow, Scotland . However, since this soon had nothing new to offer him, he broke it off before the prescribed seven years had expired. He could not open his own workshop because of the incomplete training, because the Glasgow guilds objected. In 1757 Watt got a job as an instrument maker at the University of Glasgow . There he manufactured and repaired instruments such as compasses and quadrants for the university . His one-room laboratory, which he expanded after a year to include a second room with shop windows facing the street, soon developed into a meeting place for lecturers and students. Watt made many friends at the university, although he was "only" a craftsman. Among other things, he was friends with the economist Adam Smith . He was described by his contemporaries as extraordinarily humble and amiable.

In 1760 Watt married his cousin and childhood sweetheart, Margaret Miller, born in 1736. Margaret Watt died in 1773 giving birth to their sixth child. Of their children together, only their son James, born in 1769, survived . In 1775 Watt married Anne Macgregor.

Further development of the steam engine 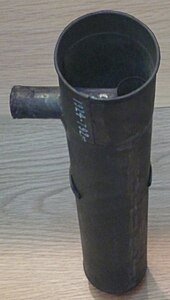 Schematic representation of the apparatus used by James Watt to carry out his experiments to increase the efficiency of steam engines, Encyclopaedia Britannica 1889.
Legend: A boiler, B steam line to the cylinder, C double-acting cylinder, D piston, E weight, F exhaust steam, G condenser, I piston of the vacuum pump, K cylinder of the vacuum pump. 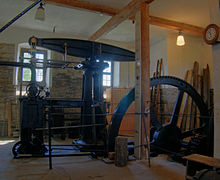 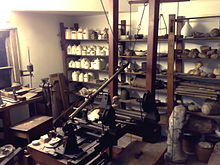 In 1764, Watt was commissioned as a university mechanic to repair a model of a steam engine based on the Thomas Newcomen design . Watt realized that a large part of the incoming water vapor was used to re- heat the cylinder wall after each cycle . Watt decided  to improve the machine based on preliminary work by Denis Papin . In addition to French and Italian, he also learned German to read German writings on heat theory. To avoid the alternating heating and cooling of the cylinder, he introduced a separate container, the condenser, to condense the water vapor . In addition, he surrounded the cylinder with a so-called 'steam jacket' ( double steam jacket ). The cylinder was flushed with steam in order to reduce its heat losses. He insulated the double coat with vertical wooden boards.

Watt gave up his position at the University of Glasgow to devote himself more to the further development of the steam engine. Although he worked as a surveyor on the side, he accumulated debts. He was also often sick. Only in 1769 he found in the iron factory owner John Roebuck (1718-1794) a financier and handed on January 5, 1769 the British patent no. 913 "A New Invented Method of Lessening the Consumption of Steam and Fuel in Fire Engines." (Dt. : A newly invented method of reducing steam and fuel consumption in internal combustion engines.), Which was registered on April 29, 1769. Watts' improvements made it possible to save more than 60 percent on hard coal compared to the Newcomen steam engine optimized by John Smeaton .

At first it was not possible to produce a vapor-tight cylinder. Meanwhile, his sponsor John Roebuck has gone bankrupt. Industry baron Matthew Boulton agreed to take over Roebuck's estate if he could get the patent extended by 25 years to 1800. After successful lobbying , the Boulton & Watt company was founded for the duration of the patent. Boulton secured 2/3 of the revenue for his share. The first operational steam engine based on the Watt principle was installed in John Wilkinson's factory in 1776 . Wilkinson's company had succeeded in producing a cylinder made of iron in the required quality: He used a process he had developed and patented to precisely enlarge the bore of cannon barrels, in which the drill bit is fixed at both ends and the cylinder rotates around it . As a result, the cylinder, condenser and air pump for 'Boulton & Watt' were manufactured in Soho near Birmingham . The steam engines were only assembled at the customer's site. Wilkinson delivered the cylinders directly to the installation site and other required materials were purchased and adjusted on site. Initially, the steam engines were not sold by 'Boulton & Watt', but rented out over the term of the patent . As a usage fee they demanded a third of the fuel costs saved compared to the optimized Newcomen steam engine. To better calculate it, Watt designed a tamper-proof counter for the piston movements.

Rotary motion instead of linear motion

In 1781, Watt converted the piston stroke into a rotary motion using a circular thrust gear. In 1782 he constructed a steam engine in which the piston is moved from both sides by steam. James Watt had now developed a steam engine in which all of the work was done by steam pressure. The piston had previously been moved by the negative pressure that occurs when the steam condenses. In this way, much more powerful machines became possible. In machines that work with steam pressure, the piston pushes the balancer up and pulls it down again. A piston rod was used instead of a chain so that these forces acting in two directions could be transmitted . For the linear guidance of the piston rod on the pendulum balancer, Watt invented Watt's parallelogram in 1784 , which he himself regarded as his greatest invention.

Since 1788 he has been equipping his steam engines with the centrifugal governors , which have already been used successfully in windmills , in order to keep the speed of the drive axle constant under load fluctuations. He also introduced horsepower (PS) as a unit of measurement for power . In the same year minting began in Soho, powered by Watt's steam engine.

The Watt steam engines finally achieved an efficiency of 3%, three times that of the optimized Newcomen steam engines. The implementation of the high-pressure steam engine in practice was delayed because of Watts safety concerns and his patent on the steam condensation outside the cylinder extended until 1800.

When Richard Trevithick (1771–1833) constructed a high-pressure steam engine running on wheels and rails in 1804 and operated it at five times the atmospheric pressure , Watt wished him to be careless with the rope around his neck.

Watt left his company in 1800 and passed his shares on to his sons James and Gregory. He himself retired to his Heathfield home in Handsworth, Birmingham, where he worked on various other inventions, including things that were more fun than serious technical use. He lived very socially and his guests raved that you could talk to him about any topic. The Scottish national poet Walter Scott once said he was relieved that Watt had become an engineer. Otherwise his talent for storytelling would have seriously rivaled him.

In Birmingham Watt received Archduke Johann from Styria, who wanted to find out about the achievements of English industry while traveling to England in 1815 and 1816.

Watt died on August 25, 1819. He was buried in St. Mary's Church in Handsworth near Birmingham.

A cenotaph was erected for him in Westminster Abbey , bearing the following almost hymnic inscription:

“Not to perpetuate a name that must last as long as the arts of peace will flourish, but to show that people know how to honor those who most deserve their gratitude, the king and his ministers have and many nobles as well as other citizens of the kingdom set this monument to James Watt who applied the power of a creative mind, trained early in scientific research, to the improvement of the steam engine, thereby increasing the resources of his country, increasing the strength of man, and becoming one outstanding position among the most famous men of science and the true benefactors of the world. "

The SI unit of power was named watt and replaced the previously used PS that he had introduced .

The British Institution of Mechanical Engineers called their highest award the " James Watt Medal ". Today it is considered to be the world's most prestigious award in the field of mechanical engineering.

James Watt was awarded an honorary doctorate from the University of Glasgow . He was a corresponding member of the French Academy of Sciences .