Schematic representation of a condenser for turbine exhaust steam

A capacitor (or condenser ) is an apparatus in which a substance from the gaseous aggregate state is transferred into the liquid state ( condensation ).

In heat engines and in refrigeration systems , condensers are used to liquefy the exhaust vapor or the vaporous refrigerant . This enables a closed cycle process in the systems mentioned. In process engineering , it is an essential element for material separation during distillation .

In thermal process engineering , it is used in particular in rectification columns to achieve condensation at the top of the column by cooling.

In refrigeration systems, the capacitor as defined by the German translation is European standard EN 378 Part 1 as a condenser referred to a linguistic demarcation for electric capacitor to create.

With the invention of the condenser by James Watt , steam engines could be built for the first time that had a comparatively low energy requirement. A condenser is therefore a crucial element for the efficient operation of steam engines and steam turbines , and its introduction is considered a milestone in the history of technology.

James Watt used the simple design of the injection condenser for his machines. Cold water is injected into a separate vessel behind the steam outlet of the machine . The steam liquefies and leaves an almost complete vacuum . This vacuum allows an improved utilization of inherent in the steam heat energy to generate kinetic energy . Injection capacitors are still used today; however, they have become very rare, since they cannot provide any usable condensate for feeding the steam boiler due to the introduction of dissolved substances .

Condensers were important on steamers at sea because seawater could only be used as feed water after desalination (through evaporation and condensation). Groundwater is often rich in lime, and condenser water is always free of lime, which is desirable from a machine point of view, since calcification in the boiler is avoided. Water circulating through nuclear reactors becomes more or less radioactive, so it makes sense to keep this water as closed as possible in the power plant in order to avoid radioactive emissions during operation. 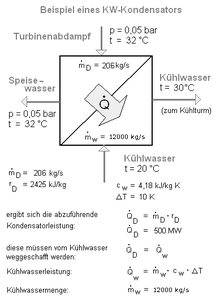 Rough calculation of the amount of cold water

Here the cold cooling water is led through pipes into the exhaust steam space, and the exhaust steam condenses on the outside of the cooling pipes on the opposite side. The number of tubes in a condenser can be very large; in the capacitors of a large nuclear power plant there are up to 20,000 pieces, each 10 m long. A nominal diameter of 15 mm to 30 mm is typical for the pipes . Inside the condenser, the cooling water is heated by 8 to 10 ° C during operation of the steam turbine  . A typical nuclear power plant has up to six such condensers for a steam turbine, each of which has a flow of up to 7  m³ of cooling water per second. Such a condenser transfers a thermal output of up to 700  megawatts from the exhaust steam of the turbine to the cooling water. The vacuum to be achieved in the condenser depends mainly on the inlet temperature of the cooling water as well as the quality of the heat transfer in the individual pipes and can in very favorable cases fall to below 40 mbar , which corresponds to a water temperature of below 17 degrees Celsius ( saturation vapor pressure ).

A special feature of these surface condensers is the presence of so-called vapor lanes. This is understood to mean gaps in the tubing through which the turbine exhaust steam can more easily flow into the tube bundle. The alley pipes lie at the edges of the steam lanes. They have a greater wall thickness compared to the normal pipes in the condenser, as they are particularly exposed to the drop impact of the wet steam flowing in at high speed. In addition, the air that gets into the steam system through seals and non-degassed feed water collects in the condenser . The labyrinth seal of the turbine shaft is particularly susceptible in this context . The air transported by the steam is concentrated in the air cooler area and is constantly sucked off from there with a vacuum pump .

As a rule, condensers are cooled with water that is taken from the environment and can endanger the function of the condenser with its contamination as fouling . Even a thin layer of dirt in the condenser pipes has a significant impact on the overall efficiency of a steam power plant . That is why the water is cleaned beforehand using filter systems; The fine dirt in the pipes is removed during operation by special sponge rubber balls which are introduced into the cooling water using the Taprogge process and then removed again with large sieves .

If possible, the cooling water for the condensation is taken directly from a river or body of water and returned again. In order to limit the amount of cooling water and the temperature of the returned cooling water, it is also cooled down again in recooling plants (e.g. open cooling tower or dry recooler ). 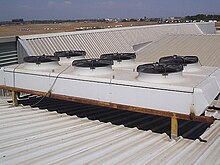 The air-cooled condenser or condenser consists of a pipe register through which an air flow is guided by means of free or forced convection . However, free convection is only used in small refrigeration systems ( refrigerators ). As a rule, axial fans are used that are arranged upright (so-called table coolers ) or horizontally. The pipes of the condenser are provided with ribs on the air side to increase the effective surface for heat transfer . The ribbed lamellas are mostly made of sheet aluminum. Speed- controlled fan motors, which are regulated via the condenser pressure, are used for optimization .

Air condensers were used in steam locomotives , among other things , to reduce their consumption of feed water (see condensation locomotive ). The airflow, acting as natural ventilation, also favored cooling here.

The evaporation condenser has a housing in which a pipe register is installed that takes the refrigerant. Water is injected into the housing from above. Radial fans are set up below the housing, which pump air into the housing in countercurrent to the water flowing out. There is a lively exchange of heat between the pipe surface, the rising air stream and the water droplets trickling down. The air is largely saturated with water vapor . An air-mist mixture rises above the evaporative condenser. For the separation and division of the liquid droplets, internals are included in the condenser, which mostly consist of plastic molded parts.