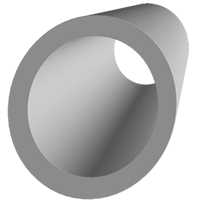 A tube (also: a tube ) is an elongated hollow body, the length of which is usually much greater than its diameter . In contrast to a hose , a tube is made of a relatively inflexible material.

Pipes generally have a circular cross-section, which is the optimal design for the most common applications. Pipes intended to be used as a beam or rod are also made with rectangular, oval and other cross-sections. They are then more resilient in one direction ( strength ) and also have less deformation ( stiffness ).

Pipes are used for the following functions:

If you bend a straight pipe with the help of a pipe bending device, a pipe bend is created .

The area of ​​application of a pipe is determined by its properties such as cross-section, material, surface quality, diameter (DN) and pressure rating (PN) .

Pipe storage in a petroleum refinery

Pipes are made from a wide variety of materials and are not flexible or not very flexible (in contrast to hoses ).

The following metallic materials are used:

Metal pipes are now made either with a welded seam or seamless. The winding of a sheet metal strip into a tube ( spiral-seam tube ) is particularly common in the ventilation sector.

Furthermore, pipes are also made of non-metallic materials:

According to Harald Roscher, supply and disposal lines can be divided into pipe generations, which relate to the main operating times of different material generations. For example, gray cast iron of the "1st generation" has not been used since 1930, whereas spheroidal graphite cast iron is still used today. The use of polyethylene began in the 1950s, with PE 100 ("3rd generation) not being used until 1995.

Since pipes and their connections are the largest investment by utility and disposal companies, great efforts are made to determine the ideal time for rehabilitation. For this purpose, on the one hand, the pipe generations with their manufacturing and material specifics and, on the other hand, a material-technical condition analysis can be used to determine the remaining useful life of the pipe. A failure of the pipe in the operating state would only allow the failure-related maintenance (so-called fire brigade strategy) as a renovation strategy and is usually associated with higher and above all unplanned costs.

Pipes with a small wall thickness in relation to their outer diameter are i. d. Usually manufactured as welded tubes. First, a hollow body is produced by bending or rolling sheet metal , which is then welded to the joints. Pipes up to a meter in diameter can be welded lengthways, larger pipes are spiral seam welded as spiral tubes and large pipes made of heavy plate are bent and welded in pieces.

The Mannesmann brothers received the patent for the first process for manufacturing seamless steel tubes in 1885 .

Plastic pipes are important in areas such as sewage disposal, drinking water and gas supply, cable protection, and agriculture and industry. Advantages over materials such as aluminum, concrete, cast iron, copper and steel are its low weight, resistance to corrosion and chemicals and ease of use. Seamless pipes are created by extrusion . They can be connected using various techniques ; clamping, compression and welding connections are the rule. Certain materials such as PVC can also be glued.

Polyethylene pipes made of HD-PE or PE 100 are widespread for the distribution of drinking water and gas, especially outside buildings in the ground. Tube of PE-X can be used for heating installations as a hot-water line, and. However, without further measures, PE-X is not oxygen-tight.

Pipes made of PP or PP-R have long been used for installations in building technology and are connected by heating element socket welding . Even the butt welding ( butt welding ) and electro fusion welding is possible.

Chemical-resistant pipe systems made of ABS and PVC are used in industry. PVC-U pipes are often used in pressure ratings PN 10 and PN 16 and are also offered as transparent pipes. Pipes made of PVC-C can (in contrast to PVC-U) also be used as hot water pipes. These pipes were also used in building installations under the trade names TC Quickpipe (gray) and Friatherm (yellowish), from 1990 with the uniform outer diameters of 16, 20, 25, 32, 40, 50, 63, 75 and 90 mm. The systems were withdrawn as leaks occurred at the adhesive points after a few years with permanently increased water temperatures under some operating conditions. The manufacturer of the Friatherm pipes also allows their fittings to be used with Quickpipe pipes, which can be helpful in the event of repairs.

Wastewater pipes are made in particular from PE, PP and PVC and, for special applications, from GRP .

Glass tubes (e.g. borosilicate glass tube) are also used for a wide variety of uses in the field of conveying liquids and gases. Due to their high corrosion resistance , glass tubes are preferred over other materials for certain applications. Glass is an established material, for example for waste water pipes in laboratories or as a heat exchanger in corrosive environments.

The connections are screwed, soft or hard soldered , welded , glued , pushed into one another with a seal , clamped with a clamping ring , just plugged in or pressed. There are also compression fittings .

It is often difficult to connect pipes made of different materials, so two metals often form a galvanic element and corrode at the connection point.

In addition to the simple cutting to length using saws or pipe cutters , pipes are increasingly being processed entirely on pipe laser machines .

The dimensions of a pipe and the corresponding standard define its geometry.

There are a variety of pipe standards for a wide variety of applications.

In the past, the pipe dimensions related to the inside diameter. A 1 "pipe had a clear width of 25.4 millimeters. With the steel quality of that time, an outside diameter of about 33 millimeters resulted. The threads, fittings (angle, socket, T-piece) and tools were also manufactured to match the outside diameter. Later, when the steel quality was improved, the pipe walls could also be thinner, but since the fittings and threading tools were manufactured according to the outer diameter, the inner diameters became larger, increasing the inner volume per meter and the possible flow rate.

In heating and sanitary engineering, the customs values ​​no longer correspond to today's standards. "Inch" pipe dimensions are now defined metrically. If you find a pipe with an outside diameter of around 33 millimeters, then it is and will remain a "1-inch pipe". The standard DIN EN ISO 228-1, for example, defines the thread identification. The inside diameter of the pipe is not described in the standard, nor can it be converted from inches to millimeters.

The following tables provide information about the dimensions (in mm) of stainless steel pipes according to DIN , ISO and ASME :