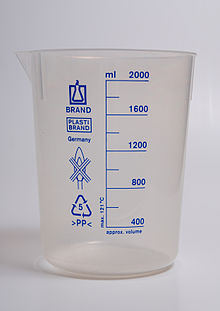 Plastic cups made of polypropylene. 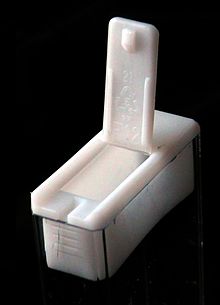 Lid of the Tic Tac pack made of PP 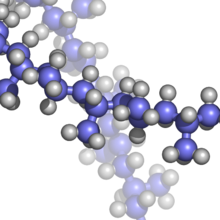 Polypropylene ( abbreviation PP ) is a thermoplastic material produced by chain polymerisation of propene . It belongs to the group of polyolefins and is partially crystalline and non-polar . Its properties are similar to polyethylene , but it is a little harder and more heat-resistant. Polypropylene is the second most common standard plastic and is widely used for packaging . In 2016, 17.66 million tons were used for flexible packaging material and 23 million tons of molded plastic parts were produced worldwide.

The chemists J. Paul Hogan and Robert Banks first made polypropylene in 1951 for the Phillips Petroleum Company . Using the method developed by Karl Ziegler , a synthesis was achieved in 1953 at the Max Planck Institute for Coal Research in Mülheim, which promised more success for large-scale application. Polypropylene was synthesized in crystalline form by Karl Rehn in the Hoechst dye works and at the same time by Giulio Natta at the Milan Polytechnic .

With the patent applied for by Natta , production began in the Italian company Montecatini . Since Ziegler had also applied for a patent, a legal dispute over patent rights ensued .

The polyethylene produced according to the Ziegler process proved to be more resistant to pressure and higher temperatures. In 1955, 200 tons were initially produced, in 1958 17,000 tons and from 1962 more than 100,000 tons. In 2001, 30 million tons of polypropylene were produced worldwide. In 2007 the production volume was already 45.1 million tons with a value of approx. 65 billion US $ (47.4 billion €). Today, after polyethylene , polypropylene is the second most important ( standard ) plastic worldwide (in terms of sales) .

PP by polymerization of propene produced. Around two thirds of the propene produced worldwide is used in the production of PP. According to Römpps Lexikon der Chemie , there are three industrial processes today:

The density of PP is between 0.895 and 0.92 g / cm³. This makes PP the standard plastic with the lowest density. With a lower density, molded parts with a lower weight and more parts can be produced from a certain mass of plastic. In contrast to polyethylene, crystalline and amorphous areas differ only slightly in their density. However, fillers can change the density of polyethylene significantly.

Polypropylene has excellent fatigue resistance. For this reason, hinges can also be made directly from PP ( e.g. glasses cases ).

The melting and long-term use temperatures of polypropylene are higher than those of polyethylene, as are numerous mechanical properties ( rigidity , hardness and strength ). Polypropylene homopolymer can be used permanently between 0 and 100 ° C. Below 0 ° C it becomes brittle . This temperature range can be z. B. increase by copolymerization , so that items produced by die casting can be heated to 140 ° C after curing. The thermal expansion of polypropylene is very high at α = 100-200 10 −6 / K (but slightly less than that of polyethylene).

Polypropylene is at room temperature against fats and almost all organic solvent -resistant , except for strong oxidizing agents . Non-oxidizing acids and bases can be stored in containers made of PP. At elevated temperatures, PP can be dissolved in solvents that are not very polar (e.g. xylene , tetralin and decalin ).

Due to the tertiary carbon atom, PP is less chemically resistant than PE (see Markovnikov's rule ).

PP is odorless and skin-friendly, it is suitable for applications in the food sector and pharmacy , it is physiologically harmless and biologically inert.

PP can be filled with mineral fillers such as B. talc , chalk or glass fibers can be filled. This significantly expands the range of mechanical properties (rigidity, usage temperatures, etc.).

In polypropylene, tacticity describes the extent to which the methyl group is aligned (arranged) in the polymer chain. Commercial polypropylene is typically isotactic. This article therefore always refers to isotactic polypropylene, unless stated otherwise.

The tacticity is usually given in percent with the help of the isotaxy index (according to DIN 16774). The index is determined by determining the insoluble fraction in boiling heptane . Commercially available polypropylenes usually have an isotaxy index between 85 and 95%. The tacticity has an impact on the physical properties . The isotactic structure leads to a partially crystalline structure. The methyl group , which is always present on the same side, forces the macromolecule into a helix shape, such as B. also with strength . The higher the isotaxy (the isotaxy portion), the greater the crystallinity and thus also the softening point, rigidity, modulus of elasticity and hardness.

Atactic polypropylene, on the other hand, lacks any regularity, which means that it cannot crystallize and is amorphous .

Isotactic polypropylene can exist in various crystalline modifications in which the molecular chains are arranged differently. Depending on the condition, the α, β and γ modification as well as mesomorphic ( smectic ) forms occur. The α-form is the predominant modification in iPP. The crystals are formed from lamellae in the form of folded chains. A special feature is that different lamellas are arranged in the so-called "cross-hatched" structure. The melting point of α-crystalline areas is given as 185 to 220 ° C, the density as 0.936 to 0.946 g · cm −3 . The β-modification is somewhat more disordered in comparison, as a result of which it forms more quickly and has a lower melting point of 170 to 200 ° C. The formation of the β-modification can be promoted by nucleating agents, suitable temperatures and shear stress. The γ-modification hardly occurs under industrial conditions and is little researched. The mesomorphic modification, on the other hand, often comes to light during industrial processing, since the plastic is usually cooled quickly. The degree of order of the mesomorphic phase lies between the crystalline and the amorphous, the density is comparatively low with 0.916 g · cm −3 . The mesomorphic phase is seen as the reason for transparency in rapidly cooled films (due to low order and small crystallites).

Syndiotactic polypropylene is of much more recent origin than isotactic PP; it could only be produced with the help of metallocene catalysts . Syndiotactic PP melts more easily, depending on the degree of tacticity it is called 161 to 186 ° C.

Atactic polypropylene is amorphous and therefore has no crystal structure. Due to its lack of crystallinity, it is easily soluble even at moderate temperatures, which means that it can be extracted from isotactic polypropylene as a by-product. The aPP separated in this way is not completely amorphous, but can contain up to 15% crystalline fractions. Atactic polypropylene has only been able to be produced in a targeted manner using metallocene catalysts for a few years now; this has a significantly higher molecular weight.

Atactic polypropylene has a lower density and strength as well as lower melting and softening temperatures than the crystalline types and is tacky and elastic at room temperature. It is a colorless, cloudy material and can be used between −15 and +120 ° C. Atactic polypropylene is used as a sealant, as an insulating material for cars and as an additive to bitumen .

The world market price for unprocessed polypropylene in 2006 was just under € 1 / kg.

PP is suitable for injection molding , extrusion , blow molding , hot forming , welding , deep drawing and machining . It can also be used to make foam . Because of its low surface energy , polypropylene is difficult to glue or print on. Around 6.6 million t are drawn into fibers every year (as of 2014). Yarns, fleeces and fabrics are made from this.

A distinction is made between two principle processes in EPP production: the autoclave technology (standard) and direct foam extrusion (rare).

Processing in the so-called molding process takes place in special molding machines. These differ from conventional EPS machines in their more stable design. The actual processing step consists in softening the foam particles using steam (steam temperature approx. 140 to 165 ° C - depending on the type of raw material) so that they sinter. Subsequent processing (e.g. deburring) is not common with EPP molded parts, unlike PUR foam parts.

Like polypropylene (PP), CPP is a semi-crystalline thermoplastic and belongs to the group of polyolefins . Compared to conventional PE films , CPP is characterized by an extremely high level of transparency, rigidity and abrasion resistance. These properties make CPP, along with OPP (Oriented Polypropylene), the most widely used polymer in the packaging industry. The main areas of application are the packaging of food, textiles or medical articles and as a lamination layer in multilayer films.

Polypropylene films can be made significantly more stable by stretching. For this purpose, the extruded film is passed over rollers that increase in speed in the machine direction. This leads to a stretching of the plastic in the longitudinal direction. In order to obtain a BOPP film, it is then also stretched in the transverse direction.

The advantages of this processing are, among other things, a reduced water vapor permeation . The mechanical strength increases, the foils stretch less, the optics ( transparency ) are improved. The tear strength also increases.

Disadvantages include decreasing sealability and printability. The light protection is lower and the oxygen barrier effect decreases.

The extruded PP granulate can also only be stretched lengthways to obtain OPP (oriented PP). It is used for the production of high-strength foils, packaging tapes, yarns or composite foils.

This oriented PP is also stretched in the transverse direction in order to obtain the maximum strength of this type of plastic. This takes place in a stretching system (preheating - stretching - stabilizing - cooling). In order to minimize tension, the film is heat- set at the end of the manufacturing process by heating it up again .

This plastic film is mainly used in packaging on tubular bag machines (horizontal and vertical), as a mono film or a component of a composite film.

In order to improve its properties, other copolymers (especially with ethene ) are offered in addition to regular polypropylene homopolymer (PP-H) . Depending on the structure, these are referred to as PP-B (block copolymer) or PP-R (random copolymer) according to ISO 1873 . 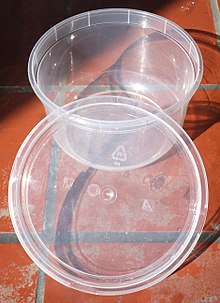 Container made of transparent PP

The special properties of PP and EPP mentioned above allow this plastic to be used very widely . PP is increasingly replacing engineering thermoplastics (= more expensive plastics) such as ABS and PA .

Basically, polypropylene is good recyclable , but the recycling rate is currently pronounced still weak. In 2017 this was less than 1% worldwide, one of the lowest recycling values ​​of all common consumer plastics today. The use for food packaging poses a particular challenge. In order to avoid contamination in the recycled material, special processes or closed recycling loops are required.