Principle of deep drawing starting from a round, flat sheet (red)

According to DIN 8584, deep drawing is the tensile pressure forming of a sheet metal blank (also called round blank, foil , plate, sheet or blank) into a hollow body open on one side. A round blank is also called a round blank. Often several process steps are carried out one after the other, in which, for example, a hollow body drawn out in front is drawn into a hollow shape with a smaller cross section. When deep drawing, changing the sheet thickness is generally not desired.

Deep drawing is one of the most important sheet metal forming processes and is used both in mass production and in small series, for example in the packaging and automotive industries, for high-pressure gas capsules and in aircraft construction.

Thermoforming of plastics is colloquially often called deep drawing, but it cannot be compared with deep drawing of metals. During the actual deep-drawing process, the material slides into the mold, a change in wall thickness is not intended. Wall thickness changes are made by ironing. The bottom of the finished workpiece is then thicker than the wall, since the first deep-drawn cup is then drawn through ironing rings (example: production of beverage cans ).

Deep drawing can be divided into three areas:

A series of different work steps that the workpieces go through one after the other. Between the four steps shown on the right, the workpiece is not deep-drawn, but tapered .

The classic process is deep drawing with rigid tools in the press .

The pressing force presses the die onto the later base of the deep-drawn part to be manufactured. The continuous movement of the punch presses the sheet metal blank through the drawing ring (also known as the die ). The punch is surrounded by the so-called hold-down device, which only keeps enough distance from the edge of the drawing ring that the sheet can slip but cannot form folds . Pull bars and pull beads / pull beads are also used to improve the effect of the hold-down device .

The edges of the punch and drawing ring must be rounded to allow the sheet to flow over the edge. Otherwise the sheet metal would tear. If the curves are too large, however, the sheet metal may no longer be guided by the hold-down device at the end of the pull.

The pressing force is transferred from the punch via the rounded base and the side part ( flange ) into the actual forming area (area between the drawing ring and the hold-down). The deformation takes place through radial tensile stress and the tangential compressive stresses caused by it. Due to the compressive stresses a reduction in diameter occurs in the edge region, such as a round plate (round plate). However, the tensile stresses in the forming area prevent the sheet metal from being thickened. The hold-down prevents creases from forming due to upsetting. 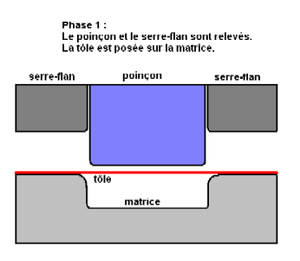 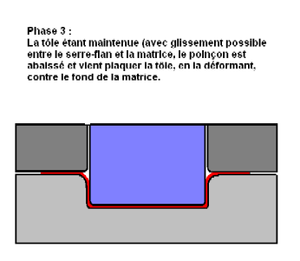 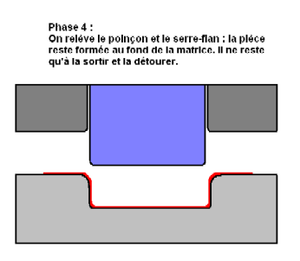 If the final draw depth cannot be reached with a single pull, pulling is carried out in several stages.

In hydromechanical deep drawing , a pressure-regulated water cushion replaces the die. The sinking punch of the upper part of the tool presses the sheet metal blank against a cushion of water, pulls it with it when it is immersed and thus applies the exact desired geometry to the drawn part.

Due to the distributed pressing of the sheet onto the punch by the active medium, the position of the critical drawing area is shifted from the workpiece base to the drawing radius. Therefore, higher drawing ratios can be achieved than with the classic drawing process, and that with lower production costs due to the relatively small installation space. However, the press forces that can be achieved are lower than with conventional systems, which is why only a limited selection of sheet metal parts can be manufactured with this technology.

With explosive forming and the related Hydrospark process , a pressure pulse is triggered in the water instead of the slow pressure increase. In the Hydrospark process, this is not done with explosives, but with an electrical discharge in the water. The pressing forces are not limited here and the high forming speed also allows difficult materials such as titanium and zirconium alloys to be machined.

The only process is magnetic forming , in which the impulse is generated directly in the sheet metal by magnetic forces. Only sheet metal with good electrical conductivity can be formed, or the workpiece is covered with one.

The workpiece shows various effects during deep drawing. Essentially, there is dislocation movement, which can lead to changes in strength. Anisotropic (direction-dependent) material properties influence the deep-drawing quality on the one hand and the component behavior on the other. This can be demonstrated by measuring the various forces that are necessary to tear a piece of wall out of a deep-drawn part (e.g. yoghurt cup): Plastics are stretched in the direction of elongation , and their macromolecules are partially aligned parallel to each other in the direction of force out. In the case of partially crystalline plastics, this also increases the degree of crystallinity .

A partially desired effect is the build-up of latent stresses due to dislocation movement in the workpiece (work hardening in metals).