A bathtub is a container that is used for personal hygiene. It is designed in shape and size so that you can lie down or sit in it, so that the body is covered with water. 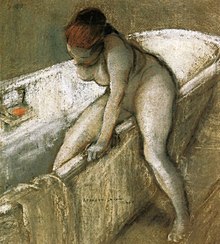 Pools at hot springs have been used for bathing by humans and animals since time immemorial. According to the Greek Athenaios, the invention of the domestic bathtub can be attributed to the inhabitants of ancient Sybaris . In fact, bathtubs were already used in Mycenaean times, more than 3000 years ago, for example in Cyprus. Some of these bathtubs can still be seen in the Archaeological Museums of Cyprus. According to legend, Archimedes discovered the Archimedes' principle when he got into his bathtub .

Initially called handmade paper or were in Central Europe washtub in the kitchen or the laundry room (or own wash houses) used for swimming, later they took for freestanding bathtubs with feet. It was only with the spread of private bathrooms that built-in bathtubs appeared that are only manufactured as a shell.

There are bathtubs made of different materials. In the palace of Nestor near Pylos there is a clay bath tub from the 13th century BC. To see. The Romans and other peoples built swimming pools with stone pools . Wooden tubs had been common at least since the Middle Ages, and bathtubs made of galvanized sheet iron had been in use since the 19th century. In 1906, the Brühler Rankewerk began as the first company in the world to produce enamelled steel bathtubs, which over the course of the century increasingly displaced the well - known cast iron bathtubs from the market. Since the 1990s, the proportion of bathtubs made of plastic ( acrylic or GRP ) has increased steadily. In the last few years (2004–2006), however, the steel enamel tubs were able to regain market share. They last up to 20 years and can be repainted if the surface becomes matt. Due to the higher manufacturing and material costs, copper bathtubs and marble baths are also less common .

In addition to the full-length bathtub, there are hip bathtubs, corner bathtubs and designs for several people. Bathtubs with nozzles for the injection of hot water is called whirlpool or jacuzzi ( Whirlpool ). Another variant is the bathtub with an integrated shower , which can be used as a shower and bathtub due to the completely sealed shower door. Arm baths and foot baths are also available, especially for medical purposes in physiotherapy. The shape and accessories of bathtubs are still part of bathing culture today .

On average, bathtubs hold around 150 liters. Space-saving bathtubs often have a volume of less than 100 liters. Large tubs for 2 and more people hold 280 - 350 liters and more. Of course, depending on your body, you need less water for a full bath. An adult person weighing 80 kg has a body volume of around 0.078 m³, i.e. around 78 liters.

In Austria, the equipotential bonding of bathtubs and similar facilities has been prescribed by ÖNORM E 8001-4-701 since 1980 .

Bathtub as a motif in the fine arts

In the fine arts the motif of the bathtub can be found. a. by the classicist painter Jacques Louis David , who immortalized the popular hero of the French Revolution Jean-Paul Marat murdered in his bathtub in 1793 . In 1963, the pop-art artist Tom Wesselmann titled one of his large-format assemblages a. a. "Bathtub No. 3 “ ( Museum Ludwig , Cologne). The comedian and cartoonist Loriot chose the bathtub as the scene of an absurd communication in the cartoon Men in the Bathroom . The German artist Joseph Beuys thematized the bathtub in various art objects. A case attracted public attention in which an art object (→ Joseph Beuys' bathtub ) was misappropriated at a celebration of the SPD Leverkusen in the Morsbroich Museum . The bathtub was covered with adhesive plasters and gauze bandages and was part of a traveling exhibition at the Von der Heydt Museum in Wuppertal . Hilde Müller and Marianne Klein discovered this tub while looking for a suitable vessel to wash their glasses and cleaned them. As a result, the city of Wuppertal had to pay DM 58,000 in damages to the art collector Lothar Schirmer in 1976 .