Palace of Nestor is - next to Ano Englianos or Palace of Ano Englianos and Pylos  - the established name for the remains of a large Mycenaean palace and administrative center from the late Helladic period , about 12 km north of today's city of Pylos , in the parish of Nestoras . Findings from the excavations can be found in the archaeological museum in Chora , the capital of the municipality.

The Mycenaean settlement, which was discovered by Carl Blegen in 1939 and excavated from 1952, is located near today's Ano Englianos about 9 km northeast of the Bay of Navarino . Blegen came across the unfortified palace of a Mycenaean wanax , d. H. of a king. The last of these kings was probably called Enkheljāwōn . Blegen gave the extensive Mycenaean palace ruins the name "Palace of Nestor ", named after the ruler of the same name over the "sandy Pylos" in Homer's Iliad . It is controversial whether the complex can actually be equated with the palace Homer describes. The linear B tables found by Blegen clearly show that the place was called Pulos ( ?? pu-ro ) by its inhabitants and that it was the capital of an important Mycenaean state that covered large parts of the Messinian landscape . However, the topographical information in the Iliad and the Odyssey about Nestor's seat fit better with an early and middle Mycenaean settlement near today's Kakovatos in Triphylia (to the north of Messenia). At the beginning of the 20th century , Wilhelm Dörpfeld had the remains of some buildings and three rich cupola graves from the 15th century BC. And the nearby settlement was thought to be the Homeric palace of Nestor. However, as recent excavations have shown, the settlement at Kakovatos was already in the second half of the 15th century BC. Chr. Destroyed by fire and can therefore hardly be the seat of Nestor described in Homer. It is also too far to the north. Possibly this region belonged to 1200 BC. BC but still to the sphere of influence of the ruler of Pylos with Ano Englianos. 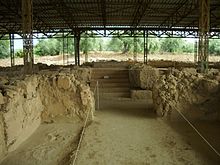 Nestor's Palace, above the old roof of the excavation

The site of the palace was settled from the Middle Helladic onwards . Traces of an enclosure wall and a fortified gate were found at the northeast end of the hill from the early and middle Mycenaean period (16th – 15th centuries BC). Otherwise there are remains of buildings from before the middle of the 14th century BC. Not preserved because the hill was leveled for the construction of the palace. The palace was built during the first phase of SH III A (approx. 1420 / 00–1370). Traces of a lower town have been discovered in several places below the hill. At the beginning of the 12th century BC The palace of Nestor was destroyed by fire and the place was no longer continuously repopulated. What triggered the sudden demise is still unclear. Even the Linear B texts from the palace archives, which come from the last months before the destruction, do not give any clear indication. The evaluation of the texts has shown that the destruction very likely took place in spring. After the 8th century BC The settlement was completely abandoned and fell into oblivion.

The administrative districts of Pylos are mentioned on the linear B boards. The empire consisted of two provinces: Deweroaikoraja in the west around Pylos and Peraikoraja in the east around Lefktron . These provinces consisted of seven and nine districts, respectively. Of particular linguistic interest is the fact that the tables were written in Greek and confirmed the assumption that Greek was also spoken in Mycenaean times. They were hardened and preserved by the above fire.

Bathtub in the palace

The most important sights include the large circular eschara (sacrificial hearth) with the still-preserved painting of the border in the megaron (throne room) of the palace and a real "bathroom" with a "bathtub", in which Telemach - son of Odysseus  - according to the legend of Polycaste bathed and oiled. The formerly multi-storey complex, of which the masonry still rises up to a meter above the ground, was roofed to protect the walls made of quarry stone and rammed earth from the weather.

Reconstructed cupola tomb near the palace

In the immediate vicinity of the palace there are two domed tombs; the stone dome of the better preserved was rebuilt.

The wooden coffin of a warrior with rich grave goods ( Griffin warrior ) was found near the palace in May 2015 . The ivory combs, bronze weapons, silver chalices and gold jewelry in the Minoan style contained in the grave represent one of the most important finds on the Greek mainland.