The Archimedean principle is named after the Greek scholar Archimedes , who lived over 2000 years ago and was the first to formulate this fact as the 16th proposition in his work About the floating bodies It reads:

"The static buoyancy of a body in a medium is just as great as the weight of the medium displaced by the body."

The Archimedes' principle applies in all fluids , i. H. to a good approximation in liquids and in gases . Ships displace water and thereby gain buoyancy. Since the mean density of a ship is less than the density of water, it floats on the surface. Even balloons and airships make use of this property. They are filled with a gas whose density is lower than that of the surrounding air. These gases (e.g. helium or hydrogen ) are by nature less dense than air in many airships and balloons; In hot air balloons and hot air airships , the air filling is heated with the help of gas burners, which reduces its density.

Explanation of the phenomenon 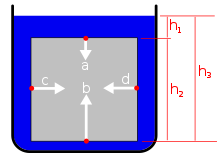 Figure 2: The force (b) at the bottom (the pressure in the water) is greater than the force (a) at the top. The lateral forces (c and d) are irrelevant for buoyancy 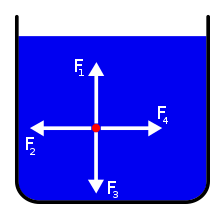 Image 3: The force that acts on a point (in liquids or gases) is the same in all directions.

In a simplified view, the cause of the buoyancy force is that the hydrostatic pressure is different on the top and bottom of a submerged body. This pressure difference results in different forces on the underside and on the upper side of the immersed body; a greater force acts on the underside than on the parts of the surface located further up.

In the example (Fig. 1) we assume a cube with an edge length of 20 cm. It is submerged 10 cm below the surface of the water.

The force thus acts on the lower surface (Fig. 1)

up. In contrast, the force acts on the upper surface

downward. The difference between the two forces, i.e. the buoyancy of this body, is calculated as follows

Archimedes, the following applies: . Referring to the example (picture 1) we can write:

The density of the fluid, the relationship to mass and volume , and the spatial factor were used. We see that both methods lead to the same result.

The following thought experiment illustrates the correctness of the Archimedean principle. To do this, imagine a fluid at rest. Any part of the fluid is marked within the fluid. The marking can be imagined like a kind of water balloon in a container of water, only that the skin of this water balloon is infinitely thin and massive and can take any shape.

You can now see that the part of the fluid marked in this way within the fluid neither rises nor sinks, since the entire fluid is at rest - the marked part floats weightlessly, so to speak, in the fluid surrounding it. This means that the buoyancy of the marked fluid part exactly compensates for its weight. From this it can be concluded that the buoyancy force of the marked fluid part corresponds exactly to its weight. Since the marking within the fluid is arbitrary, the correctness of Archimedes' principle for homogeneous fluids is shown.

In order for the body to maintain the position described in the graphic, its weight must be equal to the weight of the displaced water (78.48 N). Then all forces acting on the body cancel each other out and the body comes to a standstill. According to the formula , the body must weigh 8,000 g. Furthermore, it would have a density of 1 kg / dm 3 , i.e. the density of water.

So we can formulate the following rule:

The bodies rise or fall until the weight is counteracted by a force of equal magnitude. This can cause a changing density of the fluid or the bottom of the cup as it sinks. A body often rises until it breaks through the surface. In this case:

Discovery of the Archimedean Principle

Archimedes had been commissioned by King Hieron II of Syracuse to find out whether his crown was made of pure gold as ordered or whether the material had been stretched by cheaper metal. This task initially posed problems for Archimedes, since the crown could of course not be destroyed.

According to tradition, Archimedes finally had the saving idea when he stepped into a bathtub filled to the brim to bathe and the water overflowed. He realized that the amount of water that had overflowed was exactly the volume of his body. Allegedly he then ran through the streets naked as he was and shouted “ Eureka !” (“I found it”) .

To solve the given problem, he dipped the crown once and then a gold bar , which weighed as much as the crown, into a water container filled to the brim and measured the amount of water overflowing. Since the crown displaced more water than the gold bar and was therefore more voluminous for the same weight, it must have been made of a material with a lower density, i.e. not pure gold.

This story was passed down by the Roman architect Vitruvius .

Although legend has it that the discovery of Archimedes 'principle was based on this story, Archimedes' experiment would work with any other liquid. The most interesting thing about Archimedes' principle, namely the creation of buoyancy and thus the calculation of the density of the fluid, does not play a role in this history of discovery.

A body is loaded by the pressure that the surrounding medium (liquid or gas) exerts on its surface. A considered section of the surface with the content is chosen so small that it is practically level and that the pressure is constant in its area . Let the unit vector of the outer surface normal of the partial surface be . The medium then exercises the force

on the section. A summation of these forces over all sections provides the total lift force. 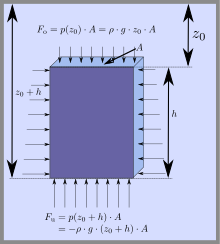 To derive the Archimedes' principle

Load capacity of a rubber balloon filled with hydrogen

The Archimedes' principle only applies strictly if the displaced medium is incompressible (not compressible). For liquids such as B. water, this is well fulfilled, so in the following we will assume a body that is immersed in a liquid of the density (strictly speaking, dependent on the temperature) .

In the liquid, the weight of a liquid column of mass rests on a horizontal surface of the size in the depth . The pressure at this depth is therefore

If the height differences are not too great, a corresponding pressure curve also applies in the air or other gases (i.e. the compressibility is of no consequence; with large height differences, a variable density would have to be taken into account). Therefore, the following considerations also apply to realistically large airships or balloons.

For simple geometric shapes, the validity of the Archimedes' principle can be calculated by hand using simple means. For a cuboid with a base and a height that is vertically immersed in the liquid, we get, for example:

This is the displaced volume, i.e. the displaced mass and its weight. The Archimedean principle is thus fulfilled. The negative sign is omitted if the -axis is chosen upwards.

For a body of any shape , the total buoyancy force is obtained from the surface integral

With the integral theorem

and follows from it