The title of this article is ambiguous. Further meanings are listed under ship (disambiguation) .

A ship , also called a boat in a smaller form , is a watercraft that floats according to the Archimedean principle . The ship is on shipyards instead. After completion of the hull , the ship is launched into the water and only then is it finally equipped . The first voyage of a ship is known as the maiden voyage . Ships are usually repaired in so-called docks .

Ships are the main means of transport for bulk cargo . The importance of passenger shipping has developed due to the increasing air traffic on long-haul routes, especially in the areas of adventure travel and cruises .

Ships for maritime shipping are also referred to as seagoing ships ; Vessels for inland navigation are " Barges called".

At the latest with the need for groups of people, as part of the search for food or looking for habitat , water having to cross over longer distances, the man was looking for appropriate means of transport . It is assumed that such vehicles were known more than 50,000 years ago, but the first detectable vehicle must have been around 6500 BC. To be dated. At first these vehicles were simply hewn tree trunks, later they were continuously developed. Due to the properties of wood as a building material, a limit in terms of size was initially reached with the clippers . It was only with the use of steel that larger ships could be built - with a length that, like today's ships of the UASC A18 class , can be up to 400 m.

Ships are currently the main means of transport for bulk cargo . Nowadays, general cargo is mainly transported in containers on container ships. The largest ship ever built in the world is the crane ship Pieter Schelte with 403,342 GT ( gross tonnage ).

Since at least the 1960s , the looks passenger ship ride a growing rivalry with the air traffic over and shifted from pure transport propagated through to transport , especially in adventure travel / cruises .

The first depictions of ships have come down to us from well before Christian times, for example from ancient Egypt. Pictures of ships on rune and picture stones document, for example, the artistic recording of ships during the Viking Age in Northern Europe. In the 17th century, the marine painting genre emerged in Europe as part of landscape painting . In Germany, it experienced its heyday in the context of the fleet enthusiasm of the late 19th century. In international literature, too, well-known authors have adopted the subject of ships in their works.

In Northern Europe and North America, ship names are generally feminine, regardless of the actual gender of the name, especially when they are ships that are named after people or geographical terms (the "Eisenhower", the "Hamburg"). Ships that are named after an expression that is usually used with an article word (for example animals, astronomical terms), usually retain its gender (the "ram", the "ferret"), but the feminine form can also be used (the “arrow”). In Romance and Slavic languages, the gender of the name is retained. The Austrian seaman's language (until 1918) is based on it - there was the “Szent Istvan”, the “Empress Elisabeth”, the “Sankt Georg” and the “Vienna” (from: the city) .

In the literature, for example, ship names are often preceded by a prefix such as MS or SV, which enables a rough categorization of the ship in question (MS: motor ship, SV: sailing vessel). If the name of a ship starts with such a prefix, the article is usually avoided. 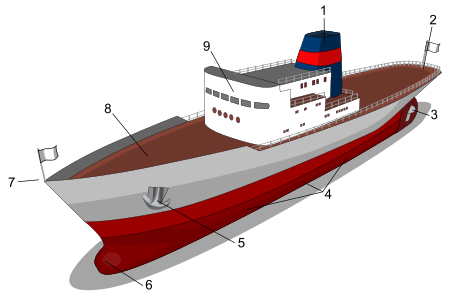 Ships are divided into different types or classes, but there is no uniform approach. It can be typed according to the area of ​​application, purpose, drive, material or hull construction.

The speed of ships is commonly expressed in knots (kn). One knot corresponds to one nautical mile (sm) per hour. The rate was originally a log (meter) measured at a the log-line on board was thrown. The line had knots at regular intervals (usually every 7 m). The measurer counted the knots as they slipped through his hand. The number of knots measured per unit of time (measurement duration was approx. 14 seconds) then gave the speed in nautical miles per hour. Hence the term “knot” as a unit of measurement for the ship's speed. More modern designs of the log measure the speed via the speed of rotation of a towed propeller ( patent log ), an impeller attached to the ship's floor or by means of a pitot tube ( dynamic pressure log , pipe log ).

The maximum speed of a ship is largely determined by the speed of the hull . This is nothing other than the propagation speed of the wave system created by the ship itself, consisting of bow and stern waves. The speed of propagation of a wave in water increases with its wavelength. The ship is thus "caught" between its bow and stern waves. In ships with a normal displacement hull , the speed can not be increased beyond the hull speed, even with increased engine power . This is determined by the length with which the ship lies in the water. Higher speeds can be achieved on ships with a glider hull. The resistance of the bow wave is overcome by the engine power, the bow of the ship rises. Even modern displacement ships reach speeds under sails in strong winds that can be slightly above the theoretical hull speed. The reason for this is the modern, smooth, elongated hulls, some of which hardly generate any bow waves.

Since the speed also depends considerably on wind and current as well as the varying load (due to fuel consumption), the ship's speed is often given in units greater than the hourly speed. An Etmal is the distance covered by a ship on one day from 12:00 to 12:00 on the next day. The Etmal is commonly given in nautical miles (sm).

In the times when passenger shipping was the only means of overseas mass transport , the fastest passenger steamer was awarded the symbolic blue ribbon , later a trophy. The yardstick was the average speed during a complete Atlantic crossing from a European to a North American port.

Exemplary speeds of some ships and boats:

For economic reasons, conventional cargo ships are usually not much older than about 30 years. If the necessary investments in the maintenance of the ship's substance and the installed technology exceed the earned income, they will be canceled. With appropriate construction and care, ships can have a much longer service life. One example was the oldest ocean passenger ship still in service until 2010, the Doulos , built in 1914 .

Even older are the Skibladner , which was put into operation on August 2, 1856, on the Norwegian Mjösa, and the Juno , which is active on Swedish inland waters, from 1874. Most of the ships now referred to as "old" are made of wood. The Holstein hunt De fire Brødre reached one of the highest known ages . It was built in 1794 and transported loads for over 150 years. The English ship Besty Canes already existed in 1688 as King Wilhelm III's yacht . and was shipwrecked in 1827. She was proven to be 139 years old. The English Royal William reached 113 years ; it expired on March 16, 1700 and was dismantled in 1813. In November 2004 the Cutty Sark turned 135 years old. She is the only remaining clipper and is in dry dock at Greenwich , London , England .

The Charles W. Morgan from 1841 is 28 years older. She is the only surviving whaling sailing ship, named after Charles Waln Morgan, her main owner. Originally designed as full-rigged ship in New Bedford , Massachusetts built of wood, it was in 1867 to Bark umgeriggt and stood 80 years in service. Today she can be viewed as a museum ship in Mystic , Connecticut , United States. The record holder is the British HMS Victory ( launched 1765), Admiral Lord Nelson's flagship at the age of 239 (2004), followed by the US frigate USS Constitution in Boston from 1797 at the age of 207 (2004). Since the HMS Victory is in dry dock in Portsmouth , the USS Constitution is the oldest seaworthy ship in the world.

In some navies as well as in merchant shipping, it is customary to mark ships and their crews in their entirety.

In Germany, such awards were only given in small numbers until the end of the First World War. Kaiser Wilhelm II awarded the gunboat SMS Iltis the “ Pour le Mérite ” (1900) for its work during the Boxer Rebellion . The " Iron Cross " received the Emden and the submarine SM U 9 . In addition, the crew members of SMS Emden were granted the right to add the name "Emden" to their house name / family name. Example: The sailor Meyer was now called Meyer-Emden. Later ships with the same name were allowed to use the award as an outward sign.

There are several ship awards in the United States Navy, including the Battle Effectiveness Award (formerly Battle Efficiency Award ) and various Command Excellence Awards , which are visibly displayed on the ship.

In civil shipping, various organizations award prizes that distinguish individual ships. In February 2018 , the Offshore Support Journal Conference awarded the Ship of the Year award to the Mærsk Master supply ship of the Mærsk shipping company .

Portal: Shipping  - Overview of Wikipedia content on the topic of shipping