The title of this article is ambiguous. Further meanings are listed under Heck (disambiguation) . 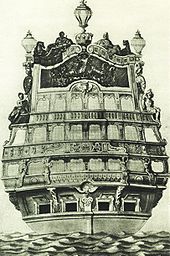 Stern of the Soleil Royal

The term stern refers to the rear part and closure of a ship , car , aircraft, etc.

The stern ( Niederdt . : hek "fence") was originally the rear elevated part of a ship intended for the helmsman , which was surrounded by an entrenchment ( bulwark ) to protect against high waves . However, the construction visible in the construction phase in the form of a grid may also be meant. While Nicolaas Witsen is silent about this term in his scientific publication on shipbuilding (1671), the explanation by shipbuilder Cornelis van Yk from 1697 goes exactly in this direction. The term can be found in the components of the rear beam and rear mare (nl. For rear support). The length of the transom was an important element in the dividers and defined the shape of the ship. The length of the stern mare determined the height of the stern . After this construction was covered in the construction process, it was divided into individual stern shelves according to architectural and aesthetic terms , which were also called mirrors due to their rather flat shape . These were then decorated according to the respective times.

Since the stern, like the bow , was equipped with a few guns and the entire enemy ship could also be swept from there with its own guns, it was an ideal target in battle. Hits through the stern had a particularly high impact, as their flight was not hindered by any obstacles such as bulkheads , walls or the like. The bullets were able to exert their maximum effect in a devastating way. Therefore, in the course of the 19th century, efforts were made to close this sensitive area similar to the ship's sides. This resulted in various tail shapes . Since the aft end of the ship changed due to other technologies, shapes and materials, a greater variety of shapes was created.