The title of this article is ambiguous. Further meanings are listed under Schott (disambiguation) .

The bulkhead (n, plural bulkheads, more rarely bulkheads, but not bulkheads ) is a closed partition or, in the older meaning, a fastener that can be pushed forward. A bulkhead can be designed to be airtight, liquid-tight or fire-retardant (fire bulkhead) (see Maritime Fire Fighting ). 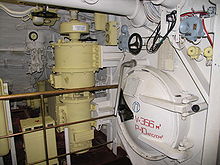 "Kugelschott" in a Russian submarine

In shipbuilding , a bulkhead is a continuous wall within the ship. Passages in partition walls with a lockable hatch to prevent water from entering are also called bulkheads. Collision bulkheads were compulsory on newly built merchant ships from 1929.

A continuous wall that divides the interior of a ship into watertight or gas-tight compartments is also known as a bulkhead. In modern shipbuilding, such bulkheads are used in the longitudinal and transverse direction (longitudinal bulkhead and transverse bulkhead). The bulkhead deck is at the top of the watertight compartments that are created in this way . The installation of bulkheads in a hull is intended to limit flooding to leaked areas in order to maintain buoyancy. In the event of an accident , they should maintain the function of the vehicle until the damaged area can be secured. Other tasks are the subdivision and structural reinforcement of the hull .

The Chinese were the first to use the bulkhead construction, such a hull from the 12th / 13th centuries. The 16th century is preserved on the Quanzhou ship , and bulkheads were also used in the construction of Admiral Zheng He's deep-sea fleet in the 15th century. Outside of China, ships in bulkhead construction were not built until around 1836. The most famous early ships of this type include the wheel frigate Guadeloupe ( keel laid in 1836) and the passenger ship Great Eastern (maiden voyage 1858).

Especially on submarines there is a “ball bulkhead” fore and aft ; it is a pressure-resistant dome .

Since ships are also threatened by fires, fire bulkheads are also installed, which, in addition to containing fires, also serve as strength associations. 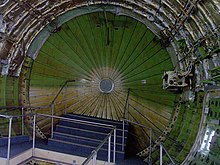 Rear pressure bulkhead of a B-747

Historic ceiling construction with bulkheads made of wood

In architecture, the term bulkhead or often bulkheads is used for stabilizing or space-enclosing construction elements. It is a lamellar parallel stiffening. Most often they appear as transverse bulkheads in ceiling structures, but are also used as longitudinal bulkheads on facades to support fragile components. Wooden beams were used in historical construction; in modern architecture, bulkheads are mostly made of reinforced concrete and, in addition to their function, can also be stylistic elements.