Rüti is a municipality in the district of Hinwil in the canton of Zurich in Switzerland .

A red Gothic R in gold

The area was probably settled in the 8th and 9th centuries. The district of Fägswil was mentioned for the first time in 807 in a Sankt Gallen document. In a certificate from Emperor Otto II (955-983) from 972, Rüti was referred to as Riutun . The name goes back to the Swiss German word Rüti . It means "clearing, cleared of wood and bushes, reclaimed piece of land".

In 1206 the Rüti monastery was founded by Lütold IV von Regensberg . A small farmer's village was built around the monastery, the inhabitants of which were engaged in agriculture , livestock farming , agricultural wage labor and textile processing. A branch of Meyer von Dürnten, ministerials of the Counts of Toggenburg and the Einsiedeln monastery , built a castle on the Batzberg , east of Fägswil, which seems to have been abandoned in the 14th century and of which only the remains of the neck ditch can be seen today. In 1238 the monastery of Rüti acquired the free people of today's Ferrach from the Counts of Toggenburg for 80 marks silver in Zurich currency and took over the rights and duties of the Toggenburg bailiwick. The monastery thus represented functions under public law for the first time, and the deed of purchase became the opening (municipal ordinance) for the residents of the hamlet for the next 300 years and was read out on court and oath days.

1408 came Rüti as part of the Landvogtei Grüningen under Zurich authorities. After the abolition of the monastery in the course of the Reformation, the monastery property became the property of the city of Zurich, which had it administered by a bailiff in the Rüti office . The main building, the interior of the church tower and parts of the nave as well as several of the remaining monastery buildings fell victim to a major fire on December 3, 1706 and made way for the new building of the main building in 1710. The Rüti office was canceled as early as 1833, the remaining monastery and farm buildings were sold and the majority of them demolished.

View from the Schanz of the remaining monastery buildings , in the background the Reformed Church (before 1706)

As early as the middle of the 16th century, Rüti had its own elementary school in the rectory - founded on Heinrich Bullinger's initiative by the Premonstratensian canons who remained in Rüti - and was part of the Zurich military organization. Shortly before the First Villmerger War in the middle of the 17th century, fortifications, the so-called Schanz north of the office building, were built as a border guard. The first Catholic service in the Zurich Oberland after the Reformation was celebrated in the pilgrim's footbridge in 1866 . In Tann , in the municipality of Dürnten, the Catholic parish church of the Holy Trinity of the Catholic parish of Rüti, which was created from 1963 to 1964 , has been standing since 1879 .

The village did not experience an economic boom until industrialization took place in the 19th century. In 1847 the Caspar Honegger weaving machine factory was established in Joweid, which later became the Rüti AG machine factory with worldwide relationships, later part of the G + F group, Sulzer Textil and since 2001 owned by the Italian Promatech. In 1833 Rüti was connected to the cantonal road network and in 1859 to the Zurich – Uster – Rapperswil railway. The latter was electrified in 1932 and has been used by the Zurich S-Bahn since 1990 . In 1873 the nail factory Hess Pilgersteg opened, in 1886 the spring factory Baumann & Cie (today: Baumann Federn AG ) and in 1895 the central heating system Johann Müller AG. The municipal utilities began operations in 1897, the post office in 1911.

The Bandwies regional shopping center has existed since the 1970s. The hospital opened in 1875, later the district hospital, was closed in 2000 for financial and political reasons. Today, the recruiting center for the army and civil defense for the cantons of Zurich, Schaffhausen and Thurgau are located in the building. The congregation has a reformed church . Catholics visit the Church of the Holy Trinity in Tann. In 2007, the 1200 year anniversary was celebrated with various occasions and festivities. 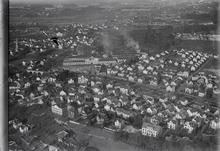 Rüti ZH, historical aerial photo from 1919, taken from a height of 300 meters by Walter Mittelholzer

The Evangelical Reformed Church , on the left the main building with the community library at the cloister courtyard

The crematorium building in the cemetery on the Chlaus , together with the reformed church since November 2009 an object of class A in the KGS inventory of the federal government

The Roman Catholic Church in Tann, the Bachtel in the background

Rüti has over 10,000 inhabitants and is therefore a town, even if life in Rüti is rather village-like and town charter was never acquired. The proportion of foreigners is over 20 percent. The number of inhabitants exceeded the limit of 10,000 for the first time in 1971/72, but fell markedly in the next few years as a result of the recession, only to increase significantly in the late 1990s.

Of the other churches, there is a New Apostolic Church in Rüti .

The municipal council consists of the following people (as of 2018):

The mayor is Peter Luginbühl.

In the Cantonal Council of the Canton of Zurich Rüti is represented by one person:

Rüti is home to shops such as Coop , Migros , Denner , Aldi and Dosenbach . All the big shops except Aldi can be found on Bandwiesstrasse, which is the center of Rüti. The two largest shopping centers, as in almost every major city in Switzerland, are Coop and Migros. The Coop moved into a larger building in 2001. Migros was rebuilt in 2004 and the range expanded.

The community has two connections to the Oberlandautobahn (A53). Rüti is located on the Rapperswil – Uster – Zurich line ( Glatthalbahn ) and is also the starting point of the former Tösstalbahn . Rüti station is served by lines S 5 , S 15 (since December 2006) and S 26 (Tösstallinie) of the Zurich S-Bahn :

There is also the following bus line, which is served by Schneider AG :

For a long time, the textile and weaving machine industry was the most important branch of industry in Rüti.

In Rüti there was a change from an industrial village to a service village.

Secondary and secondary school, the gym on the right (2011)

Rüti has ten school buildings. The vocational school at Sonnenplatz for technical training, the Widacher, Lindenberg, Schlossberg, Eschenmatt, Alpenblick, Ferrach and Fägswil school buildings for primary school and the Schanz and Egg school building for secondary school . With the overall renovation completed in 2004, the previously two separate building complexes were combined.

The community has a rich club life with around 120 clubs of all kinds, a local museum ("community chronicle") and, since 2013, an expanded library for Rüti and its neighboring community of Dürnten. The Reformed Church in Rüti and the crematorium building in the cemetery on the Chlaus-Anhöhe have been included in the KGS inventory of the federal government as objects of class A (KGS – No. 7648) since November 2009 .

The two local recreation areas Grossweier and Neu York , a clearing near Fägswil, are located near the riding stables . One destination is the Zurich Oberland local mountain, the Bachtel . On the hiking trails through forests, nature reserves and hamlets , along streams, ponds and waterfalls to the viewpoints, you can orientate yourself on the Bachtel with its distinctive transmission tower and the Batzberg (777 m above sea level) between Wald and Rüti. Other local recreation areas include the Rütiwald with branched out walking paths and Vita-Parcours between Bubikon and Rüti as well as the extensive area of ​​the Jonawald along the river of the same name on the municipal border with Rapperswil-Jona. The river has also formed a pronounced ravine area between Wald and Rüti or Tann, the Tannertobel, which merges further southwest into the wide Joweid river valley, the former industrial area of ​​Georg Fischer AG and Sulzer, which has been transformed into a service center. The Schwarztöbeli between Bubikon and Rüti, formed by the tributary of the same name as the Jona, is also very popular with those looking for local recreation; Among other things, it houses a 12 m high waterfall on the municipal border with Bubikon, the municipality's swimming pool (Badi an der Schwarz) and a bike park at the civil protection center. Rüti is also a stage on the Way of St. James and part of the long-distance hiking network. There has been a trampoline hall in Rüti since 2017.

View from the Schanz over the city center. In the background left the Bachtel, right the Batzberg , in the foreground right the monastery courtyard .

Today, Rüti is best known to foreigners for its recruiting center for the Federal Department of Defense, Civil Protection and Sport (VBS) for the cantons of Zurich , Zug , Schaffhausen and Thurgau , which was built in 2003 in the former hospital building.