Rapperswil-Jona is a political municipality in the Swiss canton of St. Gallen and with 26,999 inhabitants (December 31, 2018) its second largest city - after the city of St. Gallen .

Rapperswil-Jona, on the right bank of Lake Zurich , is a popular excursion destination thanks to the lake shore, the old town and Circus Knies children's zoo . From Rapperswil the lake dam that separates Lake Zurich into the smaller Obersee and the larger Untersee , the actual Lake Zurich, leads to Pfäffikon SZ . Until December 31, 2006, Jona was a municipality in the constituency of See-Gaster in the southwest of the canton of St. Gallen with around 17,700 inhabitants, making it the second largest city in the canton.

See also : History of the city of Rapperswil  and history of Jona SG

The municipalities of Rapperswil and Jona, which were merged on January 1, 2007, had a partially common infrastructure even before the merger , the border between the two places was almost unrecognizable even for locals, as the border area was built over. They also formed a social unit, the term Rapperswil-Jona was already included in the names of various clubs a few years before the merger (e.g. ice hockey club and FC Rapperswil-Jona ). 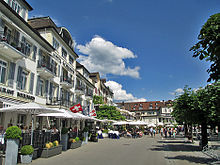 The city council of Rapperswil-Jona consists of seven members. The school president and the head of the building, transport and environment department are ex officio members of the executive; they and the mayor work full-time, the other members to a 25% workload. Until the end of 2006, the Jona municipal council and the Rapperswil council ruled separately.

Rapperswil-Jona is the largest Swiss city without a parliament . Political matters are dealt with at the citizens' assembly , which is held two to three times a year . New civil rights are foreseen in the new city regulations.

The Rapperswil roses and a blue horizontal wavy line symbolizing the Jona River and Lake Zurich are depicted on the coat of arms. The new coat of arms was adopted at the municipal assembly on December 1, 2005 as part of the vote on the new municipal code. 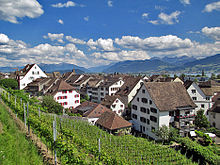 City view from the Lindenhof

In long-distance traffic there are connections in Rapperswil with the Voralpen-Express to St. Gallen and in the direction of Arth-Goldau to Lucerne . The S-Bahn 5, 7, 15 and 40 of the S-Bahn Zurich and the S-Bahn 6 of the S-Bahn St. Gallen are used for local transport. The city bus is operated by the Zürichsee and Oberland transport companies (VZO). 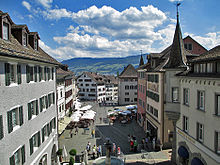 Internationally known companies based in Jona are the sanitary appliance manufacturer Geberit and the cement producer Holcim .

The weekly newspaper Obersee Nachrichten and the Zürichsee-Zeitung Obersee (former Linth-Zeitung ) report on current topics from the city and region. A city magazine is published monthly.

The primary school (as of 2012) is housed in the school buildings Hanfländer, Südquartier, Bollwies, Schachen, Herrenberg, Weiden, Lenggis and Dorf; Since August 2012, the upper level has been combined from secondary school and junior high school in the school buildings Bollwies, Burgerau, Weiden, Kreuzstrasse and Rain. Until then, both steps were housed in separate buildings. At the vocational and advanced training center in Rapperswil (BWZ), basic training and advanced training such as language courses are carried out.

The Rapperswil University of Applied Sciences (HSR) is located in Rapperswil, with a focus on technology / information technology as well as construction and planning.

Rapperswil-Jona has long been connected to the Swiss National Circus Knie , which moves into its winter quarters here and also has its headquarters. Knie also runs the local children's zoo.

The Stampf bathing facility is located on Lake Zurich in Jona and includes several beach volleyball fields, a water slide, a restaurant, a 5-meter diving platform and a paddling pool. The facility also serves as a campsite. 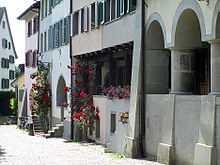 The ice hockey national league A club SC Rapperswil-Jona Lakers is at home in Rapperswil . The “Rosenstädter” were relegated from the highest Swiss hockey league, the National League-A, at the end of the 2014/2015 season. The club had previously been in the highest Swiss hockey league since its promotion in 1994. On April 25, 2018, the SCRJ Lakers rose again to the top division against Kloten. The football club FC Rapperswil-Jona , whose 1st team plays in the Challenge League , was founded in 1928. The Bandits baseball club was founded in 2001 in Jona. The first 1st team has been playing in the National League A of the Swiss Baseball Federation ( SBSF ) since 2016 . 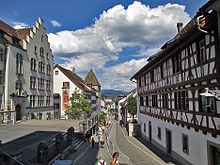 The three-day blues'n'jazz festival takes place annually in the old town and around the harbor basin in Rapperswil . With 35,000 to 40,000 visitors, it was one of the largest cultural events in the Obersee region. The first event took place in 1999. The lake night festival takes place there every three years (exception: 2013 instead of 2012). The 27th edition of the Rapperswil Lake Night Festival took place in 2015 and attracted around 75,000 visitors. The Christmas market, known as the Christkindlimärt , which has existed since 2002, is limited to the old town . With over 20,000 visitors annually, the market is one of the largest Christmas markets in Switzerland.

The Eis-Zwei-Geissebei on Shrove Tuesday at the Rapperswil Town Hall is one of the oldest customs practiced in Rapperswil.

The spring festival in Jonah is held at the end of April. It is one of the largest festivals in the region and gained regional fame, among other things because of the specialty " Shapale " from Tibet.

The Kunst (Zeug) Haus in old armory was opened in May 2008 and is a former Rapperswiler armory housed. The focus of the around five thousand works of art is the Peter and Elisabeth Bosshard Collection . The Kunsthaus brings visitors closer to Swiss contemporary art in public tours . Free workshops are offered twice a year for school classes .

In the Lotte Boots (1898-1986) In 1986, the municipality Jona bequeathed Villa Grünfels are Jugendmusikschule and Kellerbühne Grünfels housed. In the basement stage, music , cabaret and theater from the cabaret scene are shown. The villa is right next to the Jona train station.

The Center for Current Culture (ZAK) is a cultural venue for young people near the Jona train station. Various cultural events are held regularly at the ZAK.

The Enea Tree Museum has existed since 2010 .

Political communities in the constituency of See-Gaster