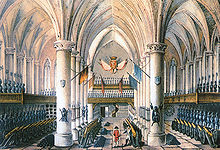 The Bremen armory in the 18th century

Inner courtyard of the Innsbruck armory in the 16th century

Graz, view inside the Landeszeughaus 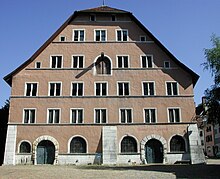 The old armory in Solothurn

An armory is a building in which weapons and military equipment were stored and repaired. Today, arsenals fulfill the original function of the armory; only in Switzerland is the term armory still used in its true sense.

The term arsenal is also used for the buildings of fire brigades , occasionally also for historical buildings in which hunting gear or other equipment was stored.

Like other devices, guns used to be called stuff . In the late Middle Ages and early modern times, the designations were armory , armamentarium , (also used for other instruments) Armory and Arsenal often used interchangeably, the term Arsenal prevailed until the 17th century.

The manager as well as those responsible for the armory were referred to as the witness captain or witness master. The kit man was in charge of the weapons.

Armories were utility buildings that had a symbolic and representative purpose in addition to the military one. These buildings were often constructed near residences in the early modern period . The positioning of an armory within a residence was not fixed and depended on the respective local structure.

Early on, armories were more than just weapons stores. Through the deliberate storage of ancient weapons, which were often shown to foreign visitors, they became the forerunners of today's museums . One example is the Landeszeughaus in Graz , which houses the world's largest historically grown collection of armor, helmets, edged weapons, rifles and pistols.

In addition to the objects themselves, the arsenal records are of great interest to historians. From this, the purchases of weapons and armor can be traced. The prices and quantities provide information about the needs of equipment and the budget of the military. The archives also contain references to soldiers' preferences and changes in military technology, e.g. B. by purchasing new equipment.

The Arsenales de Guerra in Santiago (around 1915)